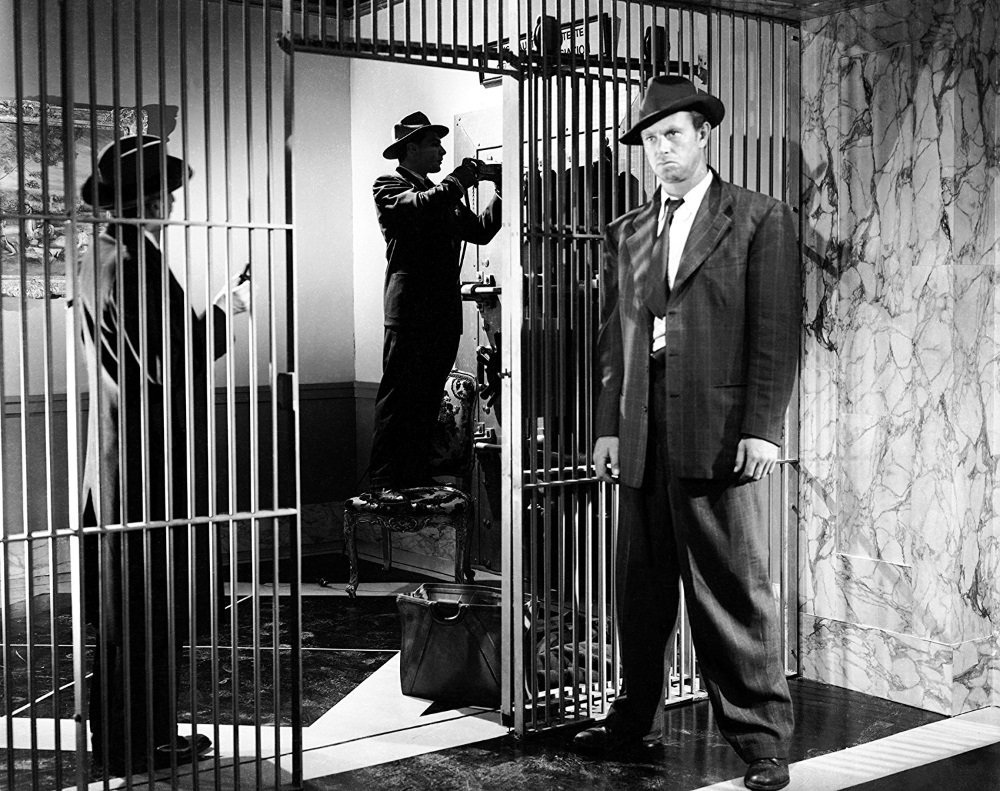 The Asphalt Jungle (1950) is one of John Huston’s rare forays into the genre that would later be called film noir. His first, The Maltese Falcon (1941), helped set the template of the private eye noir. Ten years later, working from an adaptation of the caper novel by W.R. Burnett scripted in collaboration with the author, he essentially launched the heist film as a genre of its own and set the blueprint that all subsequent heist dramas built upon.

Sterling Hayden took his first leading role as Dix Handley, the former country boy turned angry urban thug in self-destructive cycle of small-time robberies and compulsive gambling, and he’s hired to be the muscle in a crew put together by heist mastermind Doc (Sam Jaffe), who has just been sprung from prison with a massive jewelry robbery he’s been waiting years to put in action. He inspires his brotherhood of thugs (Doc’s team is filled out by getaway man James Whitmore and safecracker Anthony Caruso) to reach for the stars—the biggest haul of their career—with a meticulously worked plan that calls on each of them to do what they do best, and do it better than they ever have before.

Louis Calhern plays the smug, corrupt lawyer who finances the operation and plots to double-cross the crew (he gets the film’s most memorable line “Crime is only a left-handed form of human endeavor”), Jean Hagen is heartbreaking as the hard-luck dancehall girl who loves the doomed Hayden, a young and breathy Marilyn Monroe sparkles as Calhern’s callow mistress.

Huston directs with the lean, unsentimental steeliness that defines his best movies, from the meticulous details of the heist (executed in a largely wordless sequence) to the unanticipated complications and betrayals that sabotage the “perfect crime.” Huston’s sense of fatalism would seem to be good fit for the sensibility but his preferred visual style favors clean, well-lit image over the expressionist chiaroscuro lighting we immediately associate with the genre.

Like Howard Hawks, another Hollywood professional who celebrated professionalism in his films, Huston is more interested on how things work and how they fall apart, where arguably the greatest noirs were more interested in the why. Even as the perfect crime collapses in betrayal and the irrational impulses of human nature, The Asphalt Jungle is a model of elegant construction, street-level tragedy, and poetic justice, a film that both embraces the romance of the criminal code and acknowledges the mercenary impulses of outsiders and upstarts who have no code.

It was nominated for four Academy Awards, including best director for Huston and best screenplay for Huston and Ben Maddow, and it was added to the National Film registry in 2008.

Criterion Channel presents the film along with supplements from Criterion Collection disc release, including commentary and new and archival interviews. See below for details.

, iTunes, GooglePlay and/or other services. Availability may vary by service.
The Asphalt Jungle (The Criterion Collection) [Blu-ray]

Criterion presents a superb edition of this American classic on Blu-ray and DVD. The film has been mastered from a new 2K scan of a fine-grain master positive restored by L’Immagine Ritrovata in Bologna, Italy for the Criterion debut on Blu-ray and DVD. The image is all but flawless. The image is clear and clean, with almost no visible damage, in part the result of digital clean-up of the 2K master. Huston prefers a well-lit image over the deep shadows and chiaroscuro lighting that we associate with film noir, and this master brings out all the fine detail.

New to this release are new interviews with film noir historian Eddie Muller (he talks of Huston’s career and his relationship to the film noir genre, along with his usual wealth of backstory on the production and the players) and cinematographer John Bailey (discussing the work of director of photography Harold Rosson), the 1983 documentary feature Pharos of Chaos on Sterling Hayden (originally made for German TV), a 1979 episode of the TV program City Lights featuring John Huston, and additional archival interviews with Huston. Carried over from the 2004 DVD release is a commentary track by film historian Drew Casper featuring archival recordings of James Whitmore. The fold-out insert features an essay by Geoffrey O’Brien.