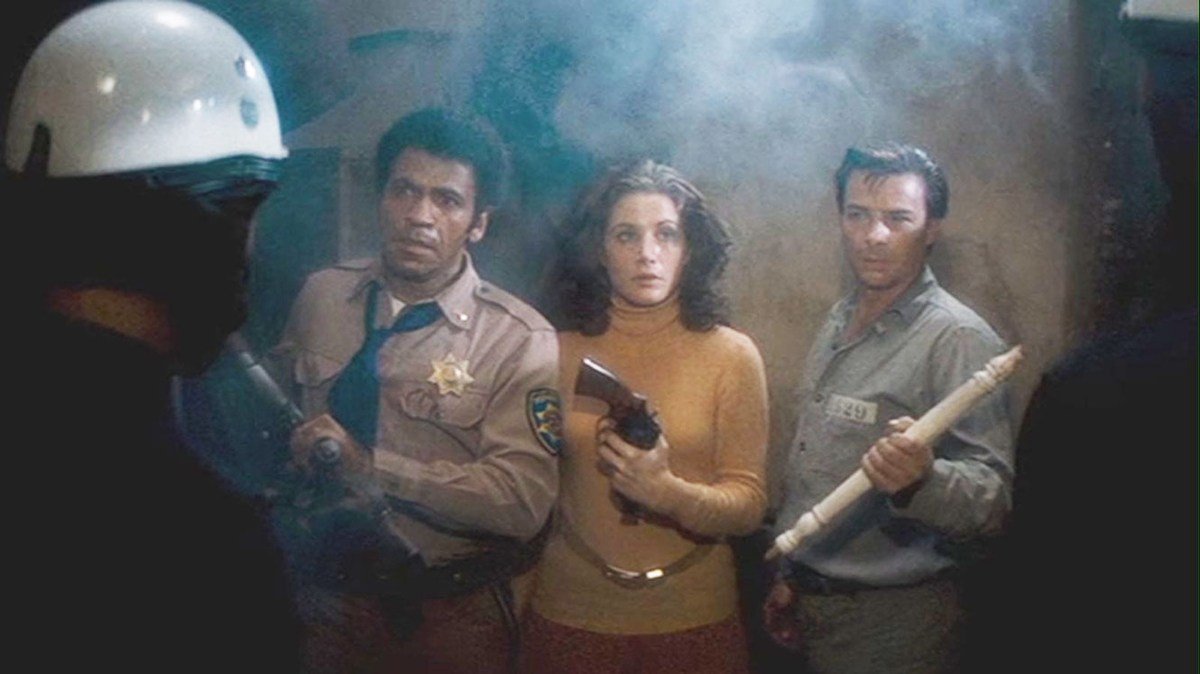 The first real solo flight by young filmmaker John Carpenter, Assault on Precinct 13 (1976) is the film where he announced his influences, found his strengths, and began to develop his style. It’s is a siege picture, a cross between a Howard Hawks western and a horror film that meets in a desolate Los Angeles no man’s land of a nearly abandoned neighborhood.

That’s where Lt. Ethan Bishop (Austin Stoker), a newly-promoted officer serving his first night in command, finds himself when everything collides. He’s basically supposed to babysit a skeleton staff at a neighborhood police station in the midst of being shut down, there to wait it out until the lights go out in the abandoned building (to be accurate, it is actually Precinct 9, Division 13). Sure enough, and out they go, along with the phone and all connection to the outside world as night falls and a bloodthirstsy gang surrounds the building and attacks with the relentless drive of a zombie horde.

That description jumps the gun a little. The film opens on a late-night ambush of gun-toting gang members by the police and Carpenter meticulously puts all the pieces in motion over the next half hour: Lt. Bishop leaving the safety of his suburban home for his new posting, a prison transport carrying convicted criminal Napoleon Wilson (Darwin Joston) to death row forced to pull in to the barely-functioning police station for repairs, the gang’s blood oath to exact revenge.

Carpenter lays it all out cleanly and clearly and he works hard to inject personality into the set-up, with banter between Napoleon and the detective (Charles Cyphers) assigned to the prison bus and Bishop getting to know his station crew. He tries to emulate Howard Hawks in the dialogue exchanges, which come off more like well-meaning homage than expressions of personality, and the results are mixed, in part due to the variable pool of talent in the cast, in part to Carpenter’s own skill in directing actors and creating an ensemble out of the individuals. He’s a raw talent to be sure, but the talent is unmistakable.

If Assault on Precinct 13 starts slow and awkward, Carpenter pulls it tighter as the group holes up in the station, cut off from the outside world, staring out into the empty dark as gang members drag off their dead and wounded and other tell-tale signs of battle between attacks. For all the exposition dealt out in the opening half hour, it’s become an almost abstract act of violence by the end, motivations long forgotten by the attackers and survival the only thought on the minds of the dwindling survivors. Like them, we are on the inside looking out for any clue as to what their next move is. “Someone will come,” repeats Lt. Bishop like a mantra, a wish as much as an article of faith, but until then he’s determined to protect his people against these marauders. It’s quite a trial by fire for both newly-promoted lieutenant and for Carpenter, who proved with this low-budget film that, like his heroes, he was good enough.

Streams free on Kanopy, which is available through most public and college library systems.

Shout! Factory’s Blu-ray edition is pressed from the transfer used by Image for their Blu-ray in 2008 and supplements include the superb, detail-rich commentary that John Carpenter recorded for the film’s initial laserdisc release about 20 years ago and an onstage Q&A with John Carpenter and Austin Stoker from a 2002 screening, recorded on low-fidelity video and included on the earlier Image disc. New to this edition is a second commentary track by art director and sound effects editor Tommy Lee Wallace and new video interviews with actors Austin Stoker and Nancy Loomis Keys.

Pingback: Stream On Demand|What to watch the week of Friday, June 5
Comments are closed.