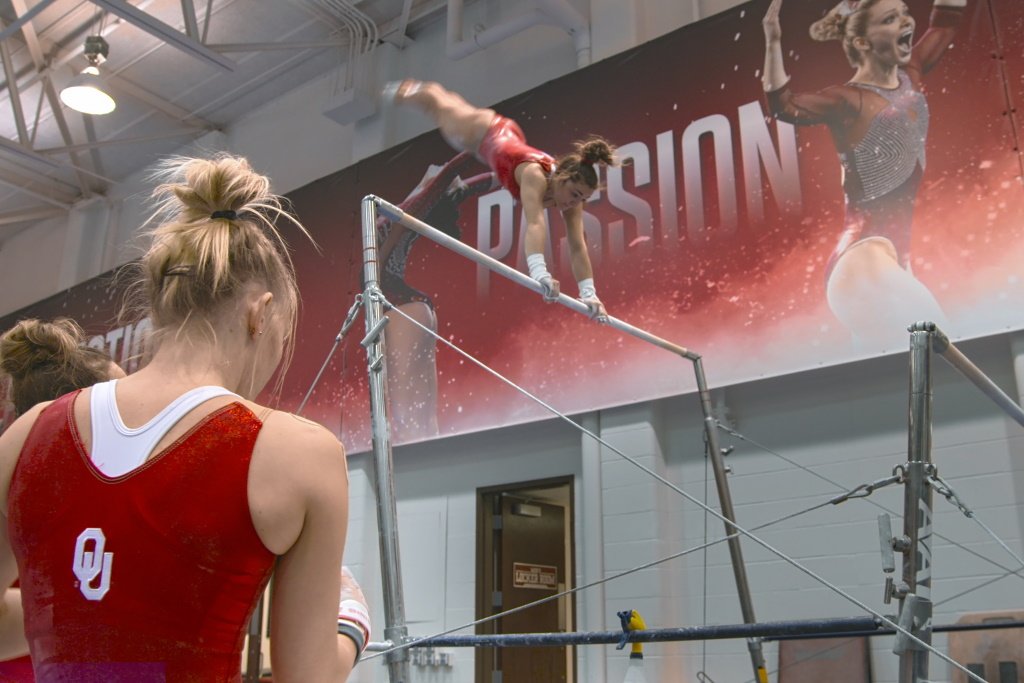 The documentary “Athlete A” (2020, PG-13) explores the abuse perpetrated by USA Gymnastics doctor Larry Nassar through the stories of the young women he betrayed, the journalists who uncovered the story, and the culture that enabled his continued abuse. “Every high-profile sexual-abuse case is a kind of spider’s web, with toxic strands of enablers and co-conspirators, all wound into what’s been, until recently, a larger cultural denial,” writes Variety film critic Owen Gleiberman. “‘Athlete A’ is compellingly told by [Bonnie] Cohen and [Jon] Shenk so that we experience the pain and courage of these survivors, but also glimpse the big-picture backdrop of what occurred.” Streaming on Netflix.

Matt Damon and Christian Bale star in “Ford v Ferrari” (2019, PG-13), which retells the true story of the Ford Racing Team taking on the Italian champions at the 1966 Le Mans race. It’s as much a story of the battle between creative collaboration and corporate control as it racetrack drama and it excels on both front, in part thanks to James Mangold’s intelligent direction. It won Oscars for film editing and sound editing. On HBO Max and all HBO platforms.

Matthew Rhys is “Perry Mason” (2020, TV-MA) in this prequel series, which imagines the origins of the famed lawyer as a seedy, cynical private detective in depression-era Los Angeles. It has nothing to do with the original novels or the popular TV series with Raymond Burr, but it’s a stylish production, handsome and shadowy, with a dark mystery at the center. Tatiana Maslany and John Lithgow costar in the limited series. New episodes arrive Sunday nights on HBO Max and all HBO platforms.

Classic pick: baseball still up in the air this season, perhaps the beloved “The Pride of the Yankees” (1942) starring Gary Cooper as New York Yankees legend Lou Gehrig, can help ease the intermission. This Oscar-nominated story of the American Dream is pure Hollywood: craft, sentimentalism, and star power wrapped in an irresistible drama. Streaming on Amazon Prime Video and Criterion Channel.

The drama “Burden” (2018, R) stars Forest Whitaker as a small-town priest who helps a member of the KKK (Garett Hedlund) leave his violent past.

In the romantic comedy “Straight Up” (2019, not rated), a brilliant, obsessive compulsive gay man who believes he might not be gay enters a relationship with a struggling actress that’s all talk and no sex.

Will Ferrell and Rachel McAdams play small-town singers with big dreams in “Eurovision Song Contest: The Story of Fire Saga” (2020, not rated), a comedy set in in the world’s biggest song contest. Dan Stevens, Pierce Brosnan, and Demi Lovato costar.

International cinema: “Lost Bullet” (France, 2020, TV-MA, with subtitles) is a lean, mean action thriller about a getaway driver (Alban Lenoir) who tries to clear his name when corrupt cops frame him for murder. Also new:

Also new is the romantic drama “It’s Okay to Not Be Okay: Season 1” (South Korea, not rated, with subtitles); two new episodes a week.

Available Saturday is the third and final season of the compelling science fiction thriller “Dark” (Germany, TV-MA, with subtitles).

An undercover CIA agent (Dave Bautista) becomes a reluctant mentor to a 9-year-old who uncovers his identity in “My Spy” (2020, PG-13), an action comedy that skips theaters and makes a streaming debut.

Gary Cooper is “The Westerner” (1940) in William Wyler’s classic western costarring Walter Brennan in an Oscar-winning performance as the infamous Judge Roy Bean.

Cult: Jack Nicholson and Adam Rourke are “Hell’s Angels on Wheels” (1967) in this minor but entertaining sixties biker flick.

The documentary “Once Were Brothers: Robbie Robertson and the Band” (2019, R) revisits the origins and legacy of the iconic musical group from the perspective of Robertson.

The second season of “Doom Patrol” (TV-MA), the offbeat superhero series created for DC Universe, and the third season of the TBS cult series “Search Party” (TV-MA) debut simultaneously on HBO Max. New episodes of each show drop every Thursday.

“Into the Unknown: Making Frozen 2” (TV-PG), a six-episode behind-the-scenes docuseries, debuts in its entirety.

The second season of Jordan Peele’s revival of “The Twilight Zone” (TV-MA) is now underway with new episodes each Thursday.

The documentary “Dads” (2020, TV-14) celebrates modern fatherhood through the stories of dads from around the world. Bryce Dallas Howard directs and her dad, Ron Howard, produces.