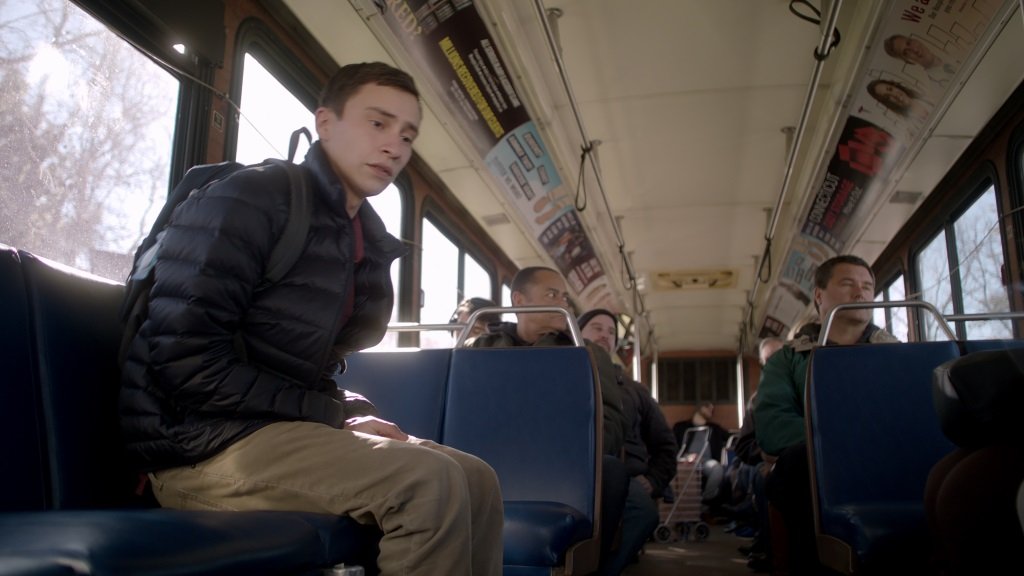 The Netflix original half-hour dramedy Atypical: Season 1 adds a new family to the sitcom world, this one with Keir Gilchrist as a high school teenager on the autism spectrum struggling to navigate the social cues and emotional turbulence he doesn’t quite understand. Jennifer Jason Leigh and Michael Rapaport costar as his parents and Brigette Lundy-Paine plays his protective sister.

The reviews have been mixed on this. Maybe it’s deliberate that Atypical feels out of phase — sort of a comedy; almost a drama; its narrative storytelling occasionally interrupted by voice-overs that seem as if they belong in another show,” writes New York Times TV critic Neil Genzlinger, who finds the show “amusing, but it’s also pretty familiar.”

Lorraine Ali, TV critic for Los Angeles Times, is more impressed: “the series is as compassionate as it is snarky, pairing a deep understanding about everyday life on the spectrum with a sense of humor rarely found in productions that deal with autism. Atypical risks offending some, but it does more good than harm by demystifying a sensitive and painful subject with an unapologetic candor.”

Amy Schumer and Goldie Hawn are Snatched in the comedy of a mother-daughter South American vacation gone horribly wrong (R). Also on DVD and Blu-ray.

Also new: family comedy Diary of a Wimpy Kid: The Long Haul, which sends the Heffley family on a road trip (PG), drama The Dinner with Richard Gere and Laura Linney (R), and historical drama Cezanne et Moi from France (R, with subtitles).

Adam Rayner is The Saint in the direct-to-VOD action reboot with Eliza Dushku and a cameo by Sir Roger Moore (not rated).

The romantic drama The Ticket (2016) stars Dan Stevens as a blind man who regains his vision and loses his way when he throws himself into his work (not rated).

From Britain comes the black comedy Barney Thomson (2016) with Robert Carlyle and Emma Thompson (not rated, with gruesome violence) and historical mini-series To the Ends of the Earth (2005) with Benedict Cumberbatch.

Foreign affairs: After the Storm (Japan, 2017) transforms from dysfunctional comedy about a fractured family to a touching drama of redemption (not rated, with subtitles).

Classics: Peter Sellers and Margaret Rutherford star in the classic British comedy The Smallest Show on Earth (1957) as aging employees of a flea pit cinema (not rated) and the Roy Rogers collection features 28 full-length oaters from the 1930s and 1940s with the singing cowboy star (not rated).

The Complete Superman Collection (1941-1942) collects all 17 gorgeous Superman cartoons produced and directed by the Fleischer Bros. (not rated).

Cult: Jack Hill’s Spider Baby (1967) with Lon Chaney Jr. is one of the great B-movie horror comedies (not rated) (reviewed on Stream On Demand here).

Streaming TV: from the 1960s comes the first seasons of the sitcoms The Beverly Hillbillies, Petticoat Junction, and The Doris Day Show and from the 1980s comes five seasons of the college sitcom A Different World.

Marion Cotillard earned an Oscar nomination for her raw performance as a woman struggling to save her job in Two Days, One Night (Belgium, 2014), directed by the Dardennes Brothers (with subtitles, PG-13). Reviewed on Stream On Demand here.

The documentary Brillo Box (3¢ Off) considers the value and appeal of art through the journey of an Andy Warhol sculpture from living room decoration to record-breaking auction sale (not rated).

Debuting on Criterion Channel is the Tampopo (Japan, 1985), the inventive foodie comedy that billed itself as “a Japanese noodle western” (not rated, with subtitles)

New on FilmStruck are John Huston’s classic “The Man Who Would Be King” (1975) with Sean Connery and Michael Caine (PG) (reviewed on Stream On Demand here) and a collection of films about life in Tel Aviv, including the acclaimed dramas For My Father (Israel, 2008) and Or (My Treasure) (Israel, 2004) (not rated, with subtitles).