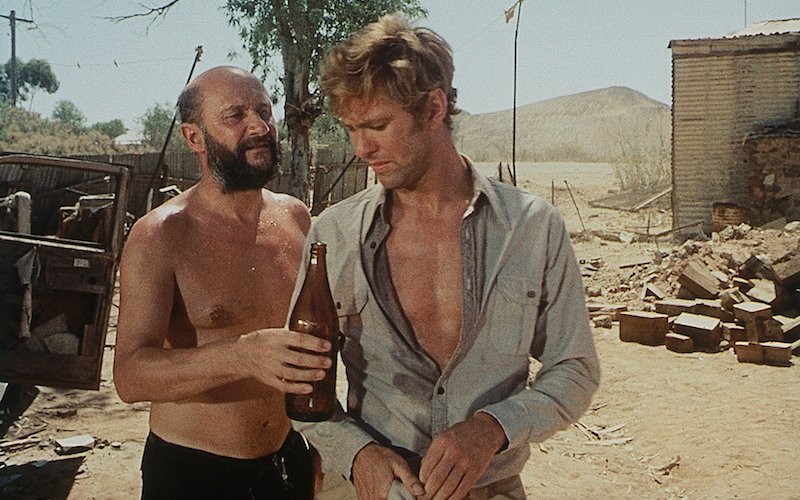 Wake in Fright (1971), one of the seminal works of the New Australian cinema of the seventies, is a brutal, blackly funny thriller of an urban schoolteacher (Gary Bond) posted to the Australian Outback, which is a sun-blasted nightmare as far as he’s concerned. He can’t leave fast enough when his Christmas vacation arrives, but his veneer of culture crumbles when he gets stranded in the grimy mining town of Bundanyabba (or just “the Yabba,” as the locals call their little slice of hell), where he unravels in non-stop drink and nocturnal kangaroo hunts.

The educated, well-spoken character looks like easy prey to the hard-drinking roughnecks and derelicts of the town but this isn’t an Aussie Deliverance. He’s a willing participant in his self-degradation in this lost weekend, and the darkly comic chain of events that keep him stuck the Yabba looks less like a cruel joke by a trickster god and more like a hard lesson in self-awareness. Under all that hubris and arrogance is just another animal acting on base instinct.

The raw, sweaty 1971 film is not a pretty portrayal of life in the outback, where men are crude, hard-drinking mates with no ambition beyond rough-house fun, and it was a flop Australia, but it was critically well received and brought more attention to the nascent Australian film culture. Director Ted Kotcheff is Canadian, its two featured stars (Gary Bond and Donald Pleasance) British, and its producers an international collection, but the self-aware sensibility is unique and impressive and even a little affectionate—the locals (including an impossibly young and beautiful Jack Thompson) are as generous and accepting as they are coarse and raw—and it became an influence on the work of Bruce Beresford, Peter Weir and others.

The film all but disappeared and was thought lost for years until a print was discovered in a film depot in Pittsburgh, and the film was restored by the National Film and Sound Archive in Australia and given a revival release in the U.S. by Drafthouse Films.

, iTunes, GooglePlay and/or other services. Availability may vary by service.
Wake in Fright [Blu-ray]

The Blu-ray and DVD from Image is presented in partnership with Drafthouse. Both formats feature commentary by director Ted Kotcheff and editor Anthony Buckley, a Q&A with Kotcheff from the film’s showing at the 2009 Toronto Film Festival, the new retrospective featurette “To the Yabba and Back,” and archival clips about the film’s production and recovery, plus a booklet with notes on the film and its recovery and restoration. Also includes a bonus digital copy, which can be downloaded from the Drafthouse website.