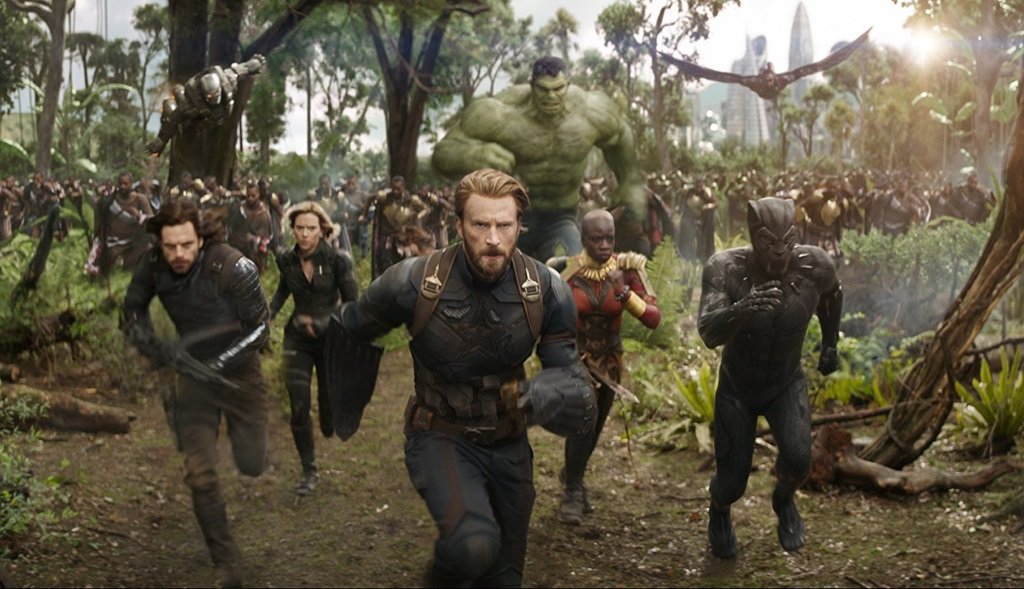 Avengers: Infinity War (2018, PG-13) is the biggest, most sprawling superhero epic yet, a comic book apocalypse that pits almost every character in the big screen Marvel Comics Universe—Iron Man, Captain America, Thor, Black Panther, Spider-Man, the Guardians of the Galaxy, and more—against cosmic supervillain-with-a-god-complex Thanos (Josh Brolin). It ends on a cliffhanger to end all cliffhangers; to be concluded in 2019. On Cable On Demand, VOD, and disc.

The animated Disenchantment from The Simpsons creator Matt Groening is a fantasy comedy about a hard-drinking, bar-brawling princess (voiced by Abbi Jacobson) who hits the road for a quest with her personal demon and a naive elf. Filled with gruesome gags and raunchy humor, it’s Groening without the constraints of network television. 10 episodes streaming on Netflix.

Also on Netflix is the Coen Bros.’s Oscar-winning No Country for Old Men (2007, R) with Tommy Lee Jones as an aging lawman and Javier Bardem as a cold-blooded hitman. Reviewed on Stream On Demand here.

The award-winning documentary Minding the Gap, which looks at the three childhood friends from troubled families navigating the choppy waters of adulthood, comes to Hulu direct from the film festival circuit.

Asa Butterfield and Alex Wolff star in the coming-of-age drama The House of Tomorrow (2017, not rated). Also new:

Christian Bale is a cavalry officer who has to overcome his own hatred to escort an Apache chief (Wes Studi) and his family back to their Montana home in Hostiles (2018, R), a violent frontier western with Rosamund Pike and Adam Beach.

Two high school comedies: a teenage girl’s secret love letters are accidentally mailed out in To All the Boys I’ve Loved Before (2018, not rated) and a socially-awkward home-schooled kid gets a crash course in high school culture in Adventures in Public School (2017, not rated).

Foreign affairs: an aspiring writer manipulates the lives of his neighbors for inspiration in the dark comedy The Motive (Spain, 2017, not rated, with subtitles).

Classics: John Wayne and Dean Martin are The Sons of Katie Elder (1965, not rated) in the classic revenge western and Robert Mitchum is an aged Philip Marlowe in the neo-noir Farewell My Lovely (1975, R.

Gone without a trace: Dozens of classic movies from Universal and Paramount Pictures, from early 1930s pre-code comedies and dramas to 1950s film noir landmarks, were added to Amazon Prime Video catalog over the past few weeks. I’ve been featuring those titles—films such as Monkey Business (1931), Island of Lost Souls (1932), The Prowler (1951), and Magnificent Obsession (1954)—in my weekly roundup and spotlighting select titles in reviews on the website. Late this week, those films (all licensed from GMG Media Group) have been pulled from the website both as streaming options for subscribers and as VOD options. I haven’t been able to determine what’s behind it all but just be aware that, in case you added these to your watchlist, they are no longer available.

60 championship episodes from recent seasons of the quiz show Jeopardy! are now streaming.

More true stories: The Cage Fighter (2017, not rated) follows blue collar worker Joe Carman as he continues the punishing sport to the neglect of his family and his own well-being.

Blake Lively and Jason Clarke star in the thriller All I See Is You (2017, R) and Will Smith is branded an Enemy of the State (1998, R) in the action thriller co-starring Gene Hackman.

There are 20 features by “Director of the Week: William Wellman,” from his landmark gangster film The Public Enemy (1931) to World War II drama Darby’s Rangers (1958) and featuring some of the greatest movies from the wild pre-code era of early sound movies, including Night Nurse (1931) with Barbara Stanwyck, Safe in Hell (1931), Heroes for Sale (1933), and Wild Boys of the Road (1933).

TCM Select Pick of the Week: Greer Garson is Elizabeth Bennet and Laurence Olivier her Mr. Darcy in Pride and Prejudice (1940), the classic Hollywood version of the Jane Austen novel adapted by Aldous Huxley. Streaming until December 27.

Also new: “Star of the Week: Frank Sinatra” spotlights 20 films, from his first leading role in Higher and Higher (1943) to his final featured performance in The First Deadly Sin (1980, R), and “Emerging Filmmakers: Jim Cummings” with 9 short films.

Suranne Jones and David Morrissey are detectives investigating a suicide that may be connected to an abandoned baby on a train in the British mystery miniseries Five Days: The Train. All five episodes now streaming. Also new:

Heather Graham and Stephen Mangan star in the British comedy Bliss about a travel writer juggling a double life with two families. Written and directed by David Cross.