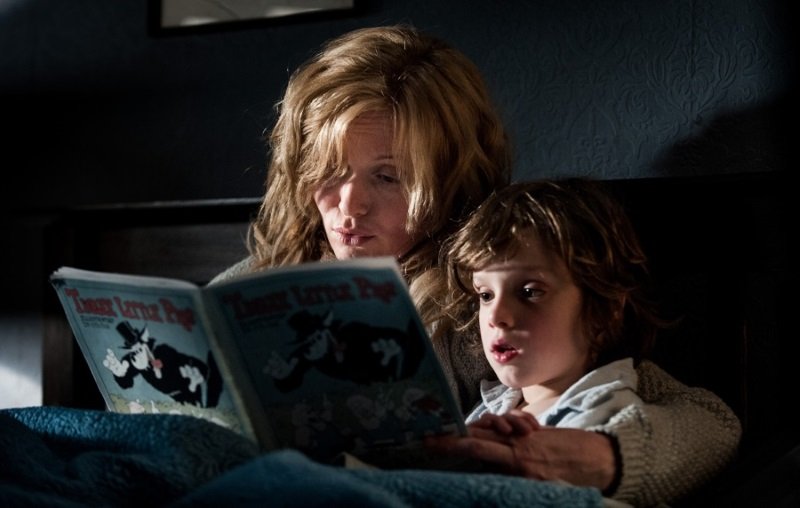 The Babadook (2014), one of the best and most original horror films in years, raises goosebumps with old-fashioned scares, relatable characters, and a provocative psychological foundation.

Amelia (Essie Kent) is a single mother who is still in mourning for her dead husband—she barely seems to be able to rouse herself to face the world—and is unable to cope with her overactive son Sam (Noah Wiseman), who is both terribly sweet and terrifyingly unpredictable. Clearly the loss has left them both scarred. Amelia has cocooned herself in an emotional shroud while Sam arms himself—quite literally, with improvised weapons that could easily maim a fellow schoolkid—to fight the imaginary monsters that may in fact be real. While the stress shows in Amelia’s increasingly haggard face and exhausted movements, Sam gets more wide-eyed and manic, a devil child who really just wants to be an angel and protect his mommy.

The title is an anagram for “a bad book,” which here is a pop-up children’s storybook that suddenly appears on Sam’s bookshelf and releases a smudgy nightmare creature that apparently jumps out of the pages and into the shadows. The book and the Babadook (Dook! Dook! Dook!)—which lurks in shadows, creeps in the corner of their eyes, and roams at night like a ghost in a haunted house (which their creepily still home has become)—both refuse to be evicted. It doesn’t take a psychiatrist to wonder how much of the Babadook is external demon invading a fraught home and how much is the guilt and resentment and darkest emotional fears let loose in the hallucinations of a troubled, sleepless mother.

Jennifer Kent, an Australian director making her feature debut, blurs the borders between the real and imaginary. She’s an experienced actress and draws tremendous performances from both Kent and Wiseman, filling the film with their anxieties and runaway emotions, but she also masterfully applies the less-is-more aesthetic to create unsettling images and terrifying suggestions. The Babadook, a charcoal sketch of an ogre with Nosferatu talons and bared fangs, remains two-dimensional even when haunting the human world, which makes it all the more scary and unreal, and Kent shrouds the house in shadow even in the bright light of day.

It’s a powerful metaphor—the darkest emotions let loose by this troubled, frazzled mother—that never lands solidly on one side or the other. It’s a primal fairy tale, a psychological thriller, an uncompromising portrait of a mother on the verge of a breakdown, and a genuinely creepy horror movie about the terrors that just might be hiding under your bed. Kent brings the film to a conclusion that satisfies all dimensions of her tale.

Add to My List on AMC+ or stream free on Kanopy, which is available through most public and college library systems.

Also on Blu-ray and DVD and on SVOD through Amazon Video, iTunes, GooglePlay, Vudu and/or other services. Availability may vary by service.
The Babadook [Blu-ray]
The Babadook [DVD]

Scream Factory, the horror imprint of Shout! Factory, presents the Blu-ray and DVD with an hour of cast and crew interviews (including filmmaker Jennifer Kent and stars Essie Davis and Daniel Henshall) and five short featurettes. There’s also a Special Edition Blu-ray which features the Kent’s 2005 short film Monster, a ten-minute, black-and-white mood piece which is the basis for the feature, and deleted scenes, plus a terrific slipcover with a Babadook pop-up. The cover art is double-sided.

Pingback: What to watch the week of Friday, April 17 - Stream On Demand
Comments are closed.