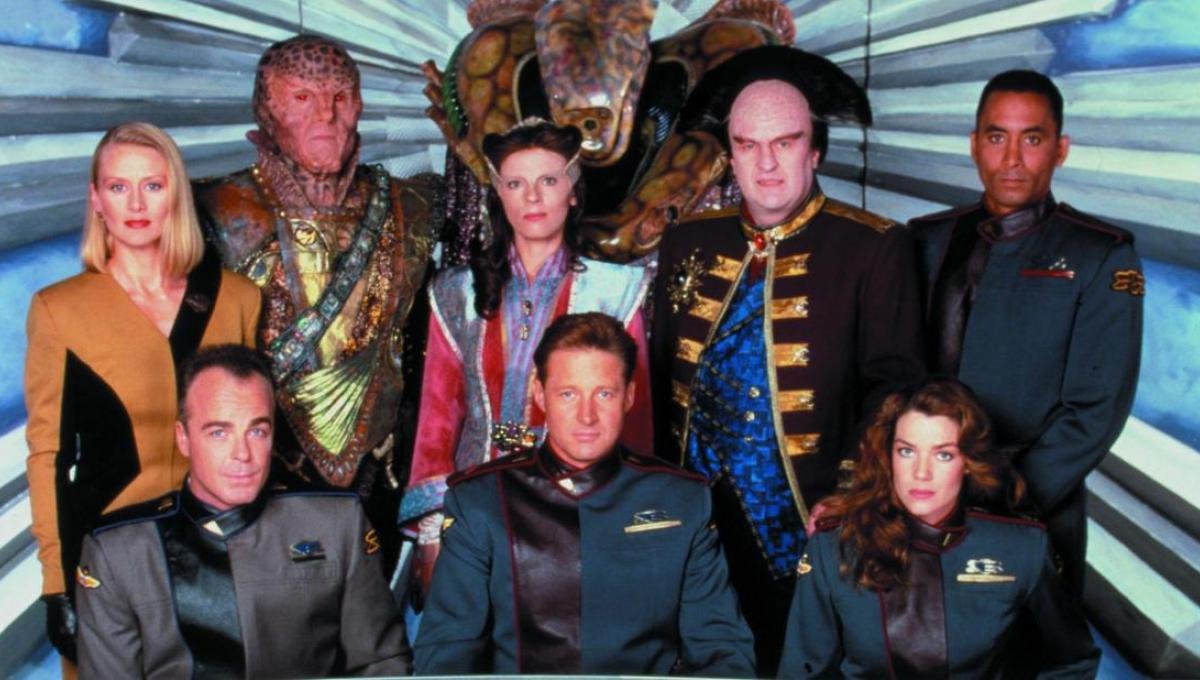 While it’s not so rare in the contemporary age of prestige cable TV and original streaming shows, Babylon 5 was unique in the annals of 20th century TV space opera: a genuine piece of epic science fiction storytelling. Creator J. Michael Straczynski’s ambitious story took five seasons to tell, more serial than series, and it is impressive: dense, sprawling, epic, with big ideas and powerful conflicts. But it took some time to find its way.

Start with Babylon 5: The Gathering, the 1993 pilot that staked out the initial territory for the series (some of which would change by the first episode in 1994), introducing primary characters and sketching out the alliances and rifts in interplanetary diplomacy. It’s a broad first stab at characters and ideas that would redefine themselves through the course of the show.

Season One proper launches to a slow start, slowly establishing a universe full of races and political relationships (in particular the very tense détente between the bitter Centauri and former colonial rulers Narn), an Earth government embroiled in conflict and conspiracy, and a diplomatic space station of military personnel, mercenaries, and intergalactic traders. There were a lot of characters to manage and the chemistry and personality didn’t quite gel for a while. Devotees may not want to miss an episode but if you find it something of a slog, jump ahead to the key episodes where the show really begins to really weave its tale. “And the Sky Is Full of Stars” (episode 8) investigates the mysterious “missing 24 hours” of Commander Sinclair (Michael O’Hare, speaking of stiff) during the much discussed Earth-Minbari war, “Survivors” reveals the hints of an assassination plot uncovered by Security Chief Michael Garibaldi (Jerry Doyle, a smart aleck tough guy in the Bruce Willis vein), and “Signs and Portents” becomes the turning point in the transformation of Narn Ambassador Londo (Peter Jurasik) from clownish dignitary to political power player, and the first move by the mysterious Shadows. Other highlights include one of the most inventive episodes of the entire series “Babylon Squared,” a spellbinding story about the sudden re-emergence of Babylon 4 (which disappeared without a trace three years before) that introduces a mythic dimension which is revisited and explained in season three, and the eventful finale “Chrysalis,” which sparks the conspiracies and wars that will drive the following four seasons of the series. By the final episodes of season one, Susan Ivanova (Claudia Christian) becomes sardonic, Garibaldi eases up, a slowly developed sense of history gives the snarling diplomatic flare between Londo and G’Kar (Andreas Katsulas, powered by righteous vengeance) a devastating backdrop, and the chemistry of Babylon 5 starts to bubble. Richard Biggs, Bill Mumy, and Stephen Furst fill out the show’s primary characters.

Season Two opens with a major cast change: sluggish station commander Michael O’Hare is replaced with Bruce Boxlietner’s John Sheridan, a battleship captain war hero with a boyish grin and a steely determination, stuck in the uncomfortable position of playing peacemaker and diplomat. He takes command in the season opener “Points of Departure,” a swift episode that opens with his Security Chief in a coma, Ambassador G’Kar missing, and Ambassador D’Lenn in a cocoon, and climaxes in a battle with a renegade Minbari battleship that threatens the station. “It’s big, beautiful, and crazy-making,” he explains to an old comrade, and he doesn’t know the half of it. Season Two is as action packed as it is dramatically compelling: Political conspiracy, a brutal war, and the beginning of an intergalactic conflict of biblical proportions await. Other highlights of an outstanding season include “The Coming of Shadows” (the dramatic turning point in the tense relations between the Narn and the Centauri; the episode lends the season its subtitle), “In the Shadow of Z’ha’dum” (the first look at the skittery black insect-like Shadows, and the rise of the Fascist-like Nightwatch), “The Long, Twilight Struggle” (a devastating end to the war), and the climactic “The Fall of Night,” directed with a thrilling, adrenaline-charged momentum by Janet Greek, who also helmed the key episodes “Points of Departure” and “The Coming of Shadows” with the same urgency.

Creator/producer/writer J. Michael Straczinski writes the entire Season Three himself—all 22 episodes, a first for an American network television—and the writing stands up in episode after episode, from the introduction of the alliance flagship The White Star and the first direct battle with a spidery Shadow war ship in the season opener “Matters of Honor” to Sheridan’s inevitable date with destiny in the finale “Z’ha’dum.” In between is a military coup on Earth and a civil war that stretches out to all of Earth’s colonies, which plunges the Babylon 5 station into a war on two fronts: against Earth forces from without and within (the Nightwatch, a militaristic brotherhood dedicated to order on their terms, has insinuated itself in the station), and the secret war with the Shadows and their subversive tactics of chaos. Highlights include the thrilling two-part collision with Earth’s military dictatorship “Point of No Return” (which also lends the season its subtitle) and “Severed Dreams,” where Babylon 5’s secret war council comes into the open; the ingenious two-part “War Without End” (the flip side to the first season episode “Babylon Squared”), and a finale that plunges the show into mythic as well epic dimensions. Just as powerful, however, are the personal odysseys of the characters, most importantly G’Kar, the one-time Centauri warrior bent on vengeance whose transformation into a prophet of peace becomes the spiritual center of the show, and Narn ambassador Londo Mollari (Peter Jurasik), the former diplomatic clown turned war-mongering puppeteer who starts paying for his dance with the devil this season with his own soul. The season subtitle “Point of No Return” couldn’t be more accurate. Jason Carter and Jeff Conaway join the cast this season.

No one returns from Z’ha’dum, they say, but like a mythological hero on an odyssey through the darkness, Captain John Sheridan (Bruce Boxleitner) emerges stronger and surer. In Season Four he leads the fight against the mysterious Shadows and then takes charge of a more personal battle to free Earth from an authoritarian madman. It might seem odd that the revolution against the dictator who took over the Earth in a coup d’etat is the climax to a series that, until then, plays like a secular twist on the holy war between heaven and hell, with alien races standing in for the angels and devils. Yet after the mythological and spiritual dimensions of the epic war, the climax is more personal, more human, and quite thrilling, especially when the once and future messiah Sheridan is brought back to mortality in a mind-bending interrogation in the excellent “Intersections in Real Time.”

A cancellation scare led creator J. Michael Straczinski to move the series climax up to the end of this season. The cancellation was averted (it was picked up by the cable channel TNT, which had great success with reruns) but the rush to compress the two year storyline into a single season still gives the show a furious pace and density, full of conspiracies, betrayals, and the threat of an galaxy-wide apocalyptic massacre. Yet for all the personal changes and history-shaking events, the heart of the series remains in the evolving relationship between the warrior turned prophet of peace G’Kar and his one-time enemy Londo Mollari, who faces the terrible consequences of his actions as he scrambles to save his people from a mad Emperor and a galactic holocaust.

Season Five concludes the series with neither a bang nor a whimper. While much of the planned storyline was shifted into Season Four (that cancellation scare thing), this season ties up loose ends and maps the destinies—some bitter, some sweet—of its myriad of characters on a tighter budget and a denouement that winds down rather than builds to a climactic peak. Yet it also charts the part of a story rarely seen in such shows: the aftermath, the work of rebuilding in the wake of war, the troubled road to peace, and the shadows of the next threat casting across the characters. Claudia Christian left the show and Ivanova was replaced by Captain Elizabeth Lochley (Tracy Scoggins), who has a complicated history with Sheridan and has her work cut out for her when a colony of telepaths looking for sanctuary are pushed to war by Psi-Corp Agent Bester (Walter Koenig). Yet the most interesting stories still G’Kar and Londo Mollari (Peter Jurasik), who faces the soul-crushing consequences of his actions. Straczinski scripts all episodes save one (Neil Gaiman contributed “Day of the Dead,” which co-stars Penn and Teller as comedy duo Rebo and Zooty).

Babylon 5 remains one of the great science fiction TV shows ever produced, and did it before cable TV and streaming services became the new frontier of challenging, sophisticated, and ambitious programming. It’s big, sprawling, exciting, thoughtful, dramatically compelling, adult, and grandly entertaining.

110 episodes. There were also TV movies made after the end of the series (available separately).

Leaves HBO Max on January 25. Add to My List on HBO Max

Each season is available on separate six-disc sets, presented in a book-like disc holder in a cardboard slipcase, each set with commentary on select episodes (by creator J. Michael Straczynski and members of the cast), featurettes, interviews, and a gag reel.