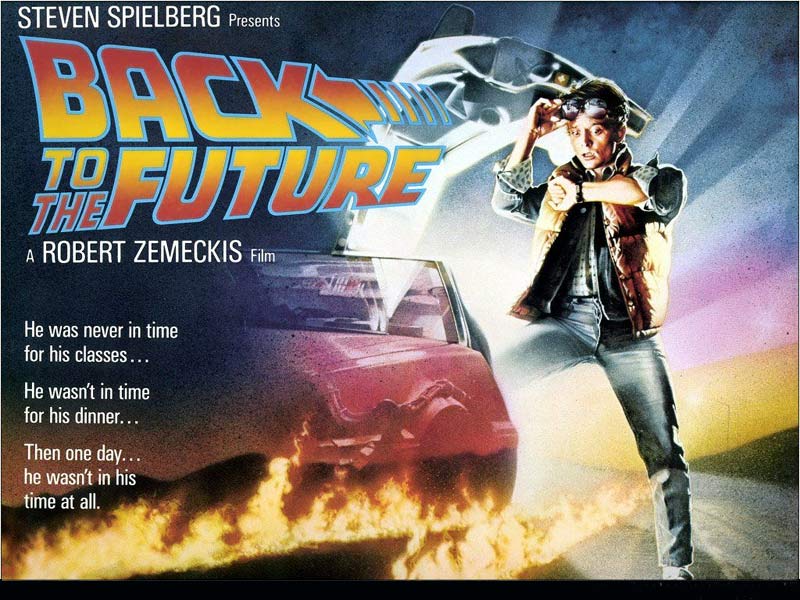 “The future is whatever you make it, so make it a good one.”

Michael J. Fox goes backwards, forwards, and sideways through time as Marty McFly in a souped-up DeLorean for the first time in Back to the Future (1985), where he jaunts back to 1955, meets his parents (Crispin Glover and Lea Thompson), and finds a younger (but just as crazy) Doc Brown (Christopher Lloyd), the genius inventor who builds the time travel device and has to concoct a way to get Marty back to 1985. The film’s hopped-up energy, action movie slapstick and tongue-in-cheek cheek social commentary spoofing helped turn it into a blockbuster hit so director Robert Zemeckis and co-writer / producer Bob Gale came back with two sequels.

Back to the Future Part II (1989) sends Marty ahead in time and then back to play in the margins of the first film. Glover bowed out of the sequel and Elizabeth Shue took over the role created in the first film by Claudia Wells. Back to the Future Part III (1990) takes on another era: it’s the old west of 1885 and Mary Steenburgen is a schoolmarm who is sweet on Sheriff Brown.

The original film is still the best. It became a pop culture phenomenon and a smash hit and stands alone just fine, but those sequels are clever, if never quite brilliant. But all I want to know is: where’s my hoverboard?

Back to the Future also won an Oscar for its visual effects.

The Blu-ray and DVD special editions include commentary tracks on each film, a ton of production featurettes and behind-the-scenes shorts, retrospective documentaries, and a few new supplements as well.