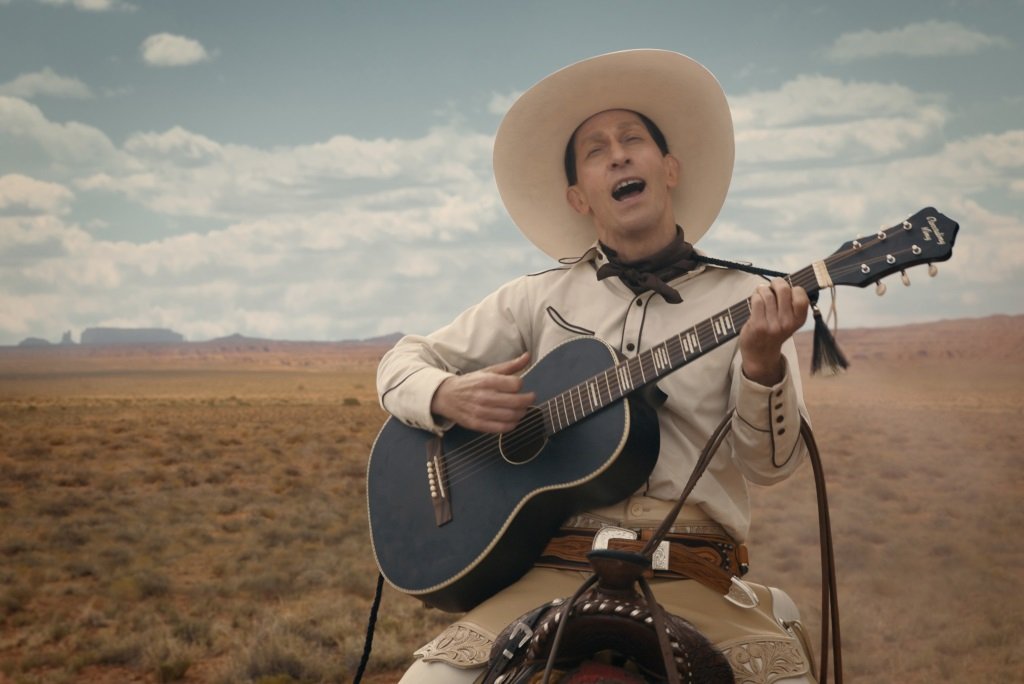 Netflix broke with its policy for the release of The Ballad of Buster Scruggs (2018, R), the American frontier comedy from the Coen Brothers. Initially planned as a six-part series featuring the likes of James Franco, Liam Neeson, and Tim Blake Nelson, it was reworked as an anthology film and released to theaters a week before the streaming debut.

“The Ballad of Buster Scruggs is one of the darkest movies by Joel and Ethan Coen, and also among the silliest,” observes New York Times film critic A.O. Scott. “It swerves from goofy to ghastly so deftly and so often that you can’t always tell which is which.

Emma Thompson is superb as a judge facing a conflict between the professional and personal in The Children Act (2017, R), a powerful drama adapted by Ian McEwan from his novel. Reviewed on Stream On Demand here. Streaming on Amazon Prime Video.

Michael Douglas is a has-been actor who reinvents himself as a Hollywood acting coach in The Kominsky Method: Season 1. Alan Arkin co-stars in the Netflix Original comedy from creator Chuck Lorre.

The cheeky British comedy Sally4Ever: Season 1 from creator Julia Davis, who stars as a seductive free spirit who tempts a suburban woman into a wild affair, begins on HBO with new episodes each Sunday.

Megan Griffiths’ Sadie (2018, not rated), an independent drama about an angry teenager (Sophia Mitri Schloss) who sabotages the romantic prospects of her single mother (Melanie Lynskey) while her soldier father is overseas, is now on VOD. Shot in Washington State, the film co-stars John Gallagher Jr.

The British drama Puzzle (2018, R) stars Kelly Macdonald as a frustrated housewife who finds a passion in the competitive world of solving jigsaw puzzles.

Rose Byrne, Chris O’Dowd and Ethan Hawke star in Juliet, Naked (2018, R), a romantic comedy based on the novel by Nick Hornby.

The Long Dumb Road (2018, R), a road comedy with Jason Mantzoukas and Tony Revolori, comes to VOD a week after debuting in theaters.

Foreign affairs: Nico, 1988 (Italy, 2017, R, with subtitles) looks at the last year in the life of the German-born singer (played by Trine Dryhold). Also new:

Available same day as select theaters nationwide is the award-winning indie drama Jinn (2018, not rated), about an African-American teenager (Zoe Renee) dealing with her mother’s sudden conversion to Islam.

The Christmas originals begin with The Princess Switch (2018), a “Princess and the Pauper” romantic comedy with Vanessa Hudgens as a Chicago baker and a look-alike a European princess who swaps places.

Diego Luna and Michael Peña star in Narcos – Mexico: Season 1, the 1980s-set prequel to the Netflix Original series Narcos that looks at the origins of the Mexican drug war.

Cam (2018, not rated), a horror film about identity theft and agency in the culture of webcasting, debuts on Netflix after winning an award winner at Fantasia Film Festival.  Also new:

True stories: Filmworker (2017, not rated) profiles Leon Vitali, the British actor who gave up his acting career to be Stanley Kubrick’s personal assistant for over 20 years.

Foreign affairs: The Crew (France, 2015, with subtitles) is crime thriller about an independent team of armed robbers forced to work for a crime boss and May The Devil Take You (Indonesia, 2018, with subtitles) is a horror film with two sisters uncovering the dark secrets of their family.

Streaming TV: the new Netflix Original series Prince of Peoria is a family-friendly sitcom about a 13-year-old prince who lives as a U.S. exchange student in suburbia. Also new is Damnation, the first and only season of the depression-era drama from the USA network.

Music: the concert special Loudon Wainwright III: Surviving Twin is an evening of music and storytelling in a program directed by Christopher Guest.

Arguably the best science fiction show on TV, The Expanse takes space opera and first contact into whole new realms. Prime Video now offers The Expanse: Season 3 and is currently working on the fourth season, which will be a Prime Original show.

True stories: The Kids Are Alright (1979, PG) featuring The Who is, simply put, one of the greatest rock docs of all time. Reviewed on Stream On Demand here. Also new: Henri-Georges Clouzot’s Inferno (France, 2009, not rated, with subtitles) offers glimpses into a passion project that collapsed in the midst of production.

The new Hulu Original series Holly Hobbie (TVPG) is a live-action show for teens and tweens inspired by the line of greeting cards and dolls.

The Department Q mystery trilogy of Danish crime thrillers, based on the detective novels of Jussi Adler-Olsen, is now streaming. All three films—The Keeper of Lost Causes (Denmark, 2013), The Absent One (Denmark, 2014), and A Conspiracy of Faith (Denmark, 2016) star Nikolaj Lie Kaas and Fares Fares and are unrated and with subtitles.

Love, Simon (2018, PG-13) uses the familiar conventions of the coming-of-age teenage romantic comedy for the story of a gay high school boy (Nick Robinson) coming out to his friends and family. Jennifer Garner and Josh Duhamel play his parent and Greg Berlanti (creator of the CW superhero shows) directs.

The family-friendly comedy Paddington 2 (2017, PG) continues the comic adventures of the marmalade-loving bear in England, this time bringing joy to prison after he’s convicted for a crime he did not commit. Hugh Grant and Brendan Gleeson co-star in this funny and charming film.

The documentary The Price of Everything (2018, TV-14) looks at the complicated relationship between art and commerce.

Kid stuff: Jeff Daniels and Alan Alda provide their voices in the short animated musical The Emperor’s Newest Clothes, an adaptation of the classic fairy tale. Also new: When You Wish Upon a Pickle: A Sesame Street Special arrives before the new season of Sesame Street debuts on Saturday.

Benicio Del Toro, Patricia Arquette, and Paul Dano star in Escape at Dannemora, a Showtime Original limited series based on the true story of a notorious New York prison break in 2015. Ben Stiller directs the seven-episode drama. New episodes roll out each Sunday.

TCM Select Pick of the Week is Ride the High Country (1962), the original sunset western and the first masterpiece from director Sam Peckinpah. Joel McCrea is the former marshal and straight shooter who just wants to complete one last job and cowboy legend Randolph Scott is his old pal who schemes to steal the gold he’s hired to guard. The laconic tale about the end of the frontier both celebrates and deconstructs the romantic view of old west nobility and heroism and its redemptive finale anticipates “The Wild Bunch” in a more old-school vein, with the tired old veterans standing up to a scruffy gang one last time to give the hope of a new generation a chance. Reviewed on Stream On Demand here.

It’s one of eight films in the “Director of the Week: Sam Peckinpah” collection, which includes his rarely-seen debut The Deadly Companions (1961) with Maureen O’Hara and his offbeat The Ballad of Cable Hogue (1970) as well as his classic The Wild Bunch (1969, R) and Pat Garrett and Billy the Kid (1973).

“Star of the Week: Jennifer Jones” is celebrated with three films, including Madame Bovary (1949) with James Mason, and “Dangerous Beauties” features such neo-noir classics as Body Heat (1981, R) with William Hurt and Kathleen Turner, Mona Lisa (1986, R) with Bob Hoskins, and The Last Seduction (1994, R) with Linda Fiorentino.

And remember, there’s only two weeks left until the streaming service is shut down by its new parent company.

The first season of the Nordic Noir Sandhamn Murders (Sweden, with subtitles) is now streaming on MHz with additional seasons arriving on subsequent Tuesdays.

Origin: Season 1, a science fiction thriller with Tom Felton and Natalia Tena as two passengers on a damaged spaceship lost in deep space, is now available on YouTube Premium, the subscription service of YouTube.