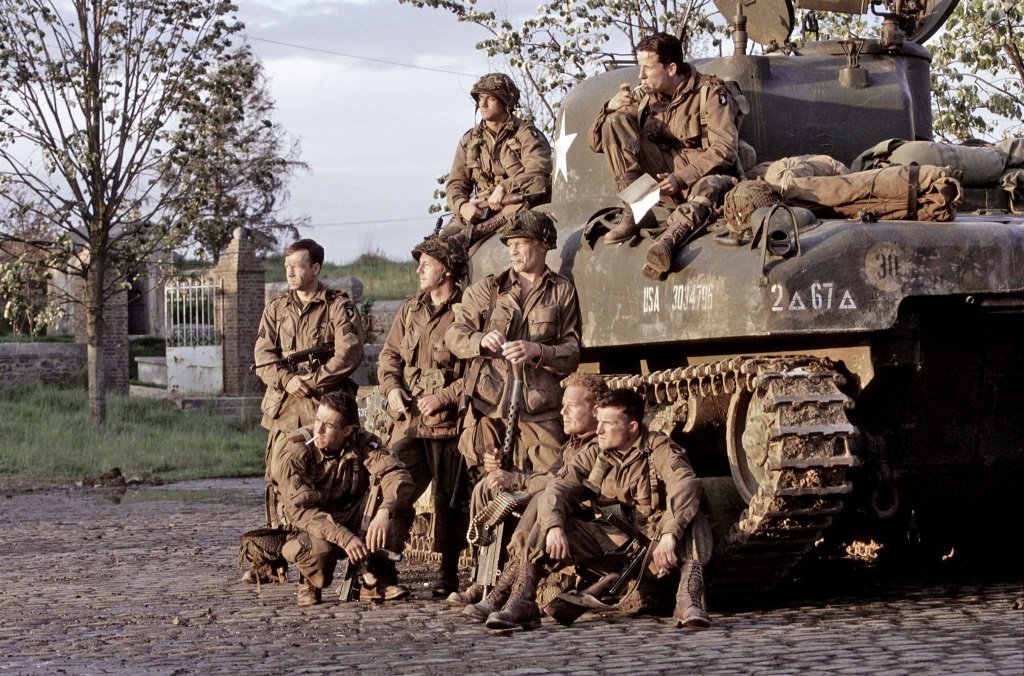 After Saving Private Ryan in a single mission, Steven Spielberg and Tom Hanks teamed up to produce a chronicle of the European theater of World War II from a soldier’s-eye view on a vast canvas. The resulting made-for-HBO ten-hour miniseries Band of Brothers (2001), based on the non-fiction book by historian Stephen Ambrose, takes us through the war in Europe, from Operation Overlord through V-J Day, through the experiences of the Easy Company of the U.S. Army 101st Airborne Division. It won six Emmy Awards (out of nineteen nominations) and is, simply put, one of the most powerful and captivating portraits of men in war ever put on screen.

Shot in same khaki and gray tones and combat staccato flicker of Ryan, as if viewed through the adrenaline-enhanced fear and hyper-alert eyes of a soldier under fire, it plays down the melodrama to focus on the texture of battle, the dynamics of platoon life, the wear of fatigue and experience, and the sudden bursts that break a lull, like a lightning attack or a deadly volley of bombs. This is not a pretty World War II film: violence and blood is both more and less than you might expect, and the finality of death is disturbing whether it’s enemy or fellow soldier.

Damian Lewis is the beating heart of the story as the drawling professional who slowly rises in rank due to his calm sense of the big picture, and Ron Livingston his best friend, fellow officer, and closet alcoholic who hides his liquor in Lewis’ footlocker. Donnie Wahlberg and Neil McDonough are just two of the subordinate character to make vivid impressions, but the sprawling cast and the interplay that builds through the course of the war gives meaning to the title: bonding under fire is no cliché here, but a simple matter of survival. Scott Grimes, Michael Cudlitz, and Dexter Fletcher co-star and a young Michael Fassbender appears in a number of episodes.

HBO followed it up nine years later with The Pacific, taking the similar approach to the Pacific Theater of World War II. It’s very good as well but Band of Brothers was first and remains the superior production. Note that co-producer Tom Hanks himself directs the fifth episode.

or see it HBO Now, HBO Go or HBO On Demand.

, iTunes, GooglePlay and/or other services. Availability may vary by service.
Band of Brothers [Blu-ray]

HBO’s Blu-ray and DVD releases present the ten-episode series on six-disc sets with an optional enhanced viewing “Field Guide” (an interactive reference guide which enables the viewer to access historical background to the episodes) and the feature length documentary We Stand Alone Together: The Men of Easy Company featuring interviews with the real-life company members whose deeds are dramatized in the miniseries. Also includes the featurette “The Making of Band of Brothers,” Ron Livingston’s “Video Diaries,” a featurette about HBO’s premiere screening of the miniseries on the beaches of Normandy, character bios, stills gallery, episode previews, and a series index. The Blu-ray edition also features picture-in-picture commentary with the real men of Easy Company and an enhanced interactive “Field Guide.”