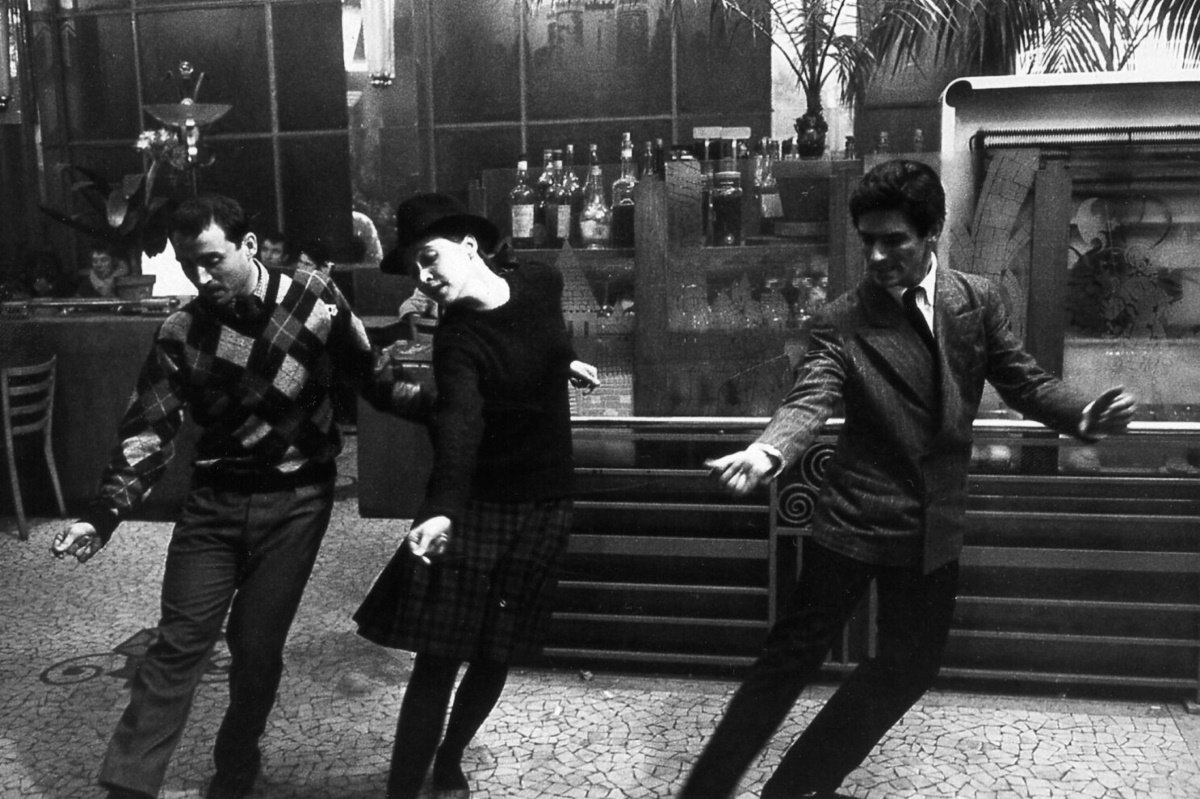 Band of Outsiders (France, 1964) is one of Jean-Luc Godard’s most cinematically playful films, an anti-Jules and Jim crime caper, yet more in tune with Francois Truffaut’s sense of cinematic humor than Godard’s later politically bent works.

The 1964 B&W film stars Anna Karina (Godard’s muse of the early sixties) as Odile, a veritable innocent sucked into the schemes of two best friends, the confident lothario Claude Brasseur and the shy, subservient pretty boy Sami Frey. They bounce back and forth in her affections until they begin to terrify her, yet she’s too smitten to give them up.

They are excitement and attention and fun for the restless Odile, a movie adventure come to life (complete with a spontaneous dance number!). They, however, act more interested in each other than in the girl, who is little more than a good time and the key to an impulsive, ill-conceived crime. The chaos of the climax has a fun sense of narrative messiness that Godard never tries to clean up. He merely revels in the complications and leaves them hanging, for they matter not to our live-for-the-moment heroes.

You could also call it Godard’s answer to Truffaut’s Shoot the Piano Player, with his own distinctive take on the doom of French youth playing out B-movie crime fantasies.

And for those who never caught it before, this is the film that inspired the name of Quentin Tarantino’s production company. The original French title of the film is “Bande à part.”

Mastered from a 2010 high-definition restoration by Gaumont Studio in France for its Blu-ray debut. It’s cleaner and shows more detail than the 2003 DVD (which looked quite fine in its own right).

The supplements are carried over from the earlier DVD: video interviews with star Anna Karina (18 minutes) and cinematographer Raoul Coutard (11 minutes), excerpts from the 1964 TV documentary “Cinéma de Notre Temps: La Nouvelle Vague par elle-même” (with interviews with Jean-Luc Godard and the only known behind-the-scenes footage of Godard directing “Band of Outsiders”), Agnes Varda’s lark of a silent comedy short “Les Fiances du Pont MacDonald” (featured in her film “Cleo From 5 to 7”) starring Godard and members of the cast of “Band of Outsiders,” a visual glossary of references and wordplay found in the film, two trailers (including Godard’s original release trailer), and a booklet with an essay by Joshua Clover, excerpts from a 1964 Godard interview, and Godard’s own descriptions of the three main characters (originally written for the film’s pressbook).