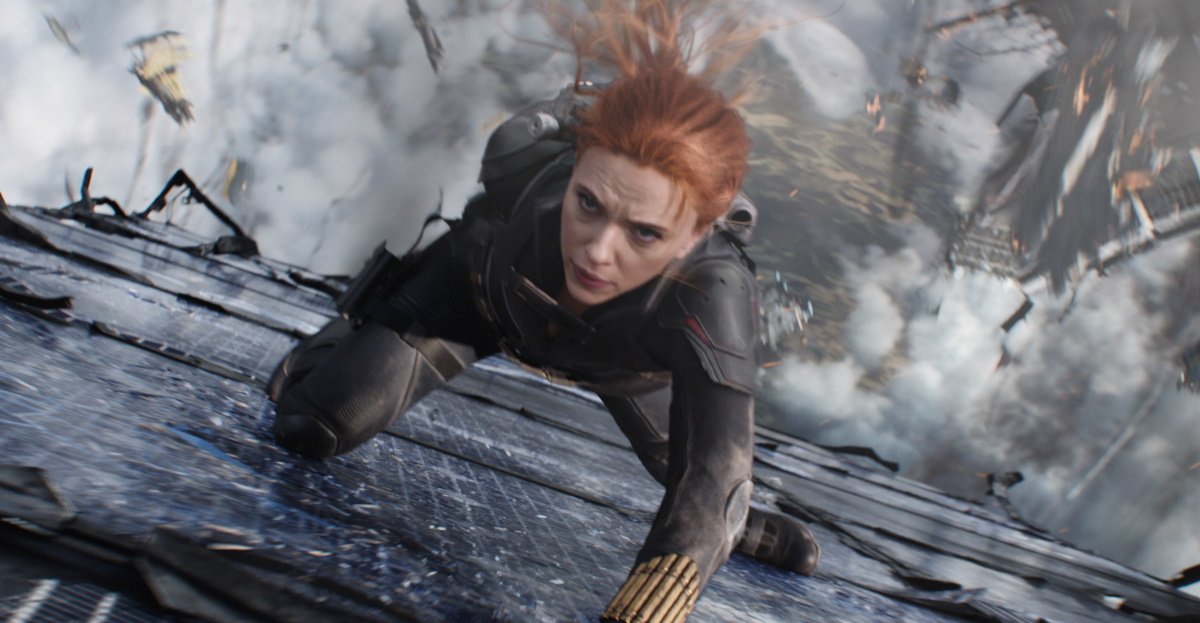 Scarlett Johansson reprises her role as Natasha Romanoff aka “Black Widow” (2021, PG-13) in the first solo film for the Marvel hero. Set between the “Civil War” and “Infinity War” films, it’s a superhero adventure as a conspiracy thriller that sends Natasha looking for answers in her origins in Russia’s super soldier program and in the family she left behind. Florence Pugh plays the sister, a fellow spy, David Harbour their father, a disgraced Soviet superhero in his own right, and Rachel Weisz their mother. Australian-born filmmaker Cate Shortland directs. The prequel is the first film in Phase Four of the Marvel Cinematic Universe. It debuts as a premium rental the same day it opens in theaters. (Disney+)

“Bridesmaids” writers Kristen Wiig and Annie Mumolo cowrite and star in the comedy “Barb and Star Go to Vista Del Mar” (2021, PG-13) as middle-aged best friends who leave their small Nebraska town for the first time and get tangled in a dastardly plot while vacationing in the Florida resort town. A mix of spy spoof and screwball romance, with a musical number or two tossed in, it costars Jaime Dornan, Damon Wayans Jr., and Wendi McLendon-Covey. (Hulu)

A Jewish funeral service turns into a comic nightmare for struggling college-age student Danielle (Rachel Sennott) when her former girlfriend, her current sugar daddy, and his young wife and baby show up in “Shiva Baby” (2021, not rated). The anxiety is just the beginning as her lies start to unravel in front of her parents. This comedy of awkward situations pushed to the painfully funny limit plays out pretty much in real time. (HBO Max)

The next generation of monsters learn to create laughter instead of scares in the animated comedy “Monsters at Work: Season 1” (TV-G), the small screen sequel to “Monsters, Inc.”. Features the voices of Billy Crystal and John Goodman as Mike and Scully. New episodes on Wednesdays. (Disney+)

Think of “We the People: Season 1” (TV-Y7), an animated series of musical lessons in civil rights, citizenship, and government, as a 21st century version of “Schoolhouse Rock.” Features songs by Janelle Monae, Adam Lambert, Lin-Manuel Miranda, Brandi Carlile, and others. Barack and Michelle Obama are among the producers.

International passport: two cops (Pio Marmaï and Vimala Pons) team up to stop a dangerous drug that gives humans superpowers—at a cost—in “How I Became a Superhero” (2021, France, TV-MA).

International TV: the historical romance “The Cook of Castamar: Season 1” (Spain, with subtitles) follows the fortunes of a talented young chef who is wooed by a widowed duke in 18th century Madrid.

Jason Segel is “Our Friend” (2019, R) who puts his life on hold to help his best friends (Dakota Johnson and Casey Affleck) when one of them is given six months to live. Based on a true story.

Walter Matthau and Robert Shaw star in the original “The Taking of Pelham One Two Three” (1974, R), a crack subway heist thriller and one of the best New York crime films of the 1970s.

Revisit some of the great westerns, from the epic to the offbeat, in this quartet of classics:

Kid stuff: a surf-mad penguin gets mentored by a tropical hippie hermit in the animated “Surf’s Up” (2007, PG), featuring the voices of Shia LaBeouf, Zooey Deschanel, and Jeff Bridges.

“Moffie” (2020, not rated), set in 1981 South Africa, follows a white teen (Kai Luke Brummer) as he fulfills his compulsory military service in a brutally racist and homophobic military culture while hiding his own homosexuality.

Shot in and around Portland, Oregon, “Leave No Trace” (2018, PG) is a touching drama about a troubled vet and loving single father (Ben Foster) trying to raise a daughter (Thomasin McKenzie) off the grid.

Diane Lane and Kevin Costner play grandparents who go on a mission to rescue their grandson from a criminal family living off the grid in “Let Him Go” (2020, R).

A group of strangers are hunted for sport by wealthy elitists in the divisive satirical thriller “The Hunt” (2020, R), written by Damon Lindelof (HBO’s “Watchman”) and starring Betty Gilpin and Hillary Swank.

The family summer comedy “The Sandlot” (1993, PG) has become a beloved blast of nostalgia for many.

The fourth episode of “Loki” is accompanied with an animated “Loki”/”The Simpsons” crossover short.

In “The Beast Must Die: Season 1” (not rated), a mother (Cush Jumbo) goes after the man (Jared Harris) she believes killer her son. New episodes each Monday, a week before they debut on cable.

A murder on the border of Sweden and Denmark opens the crime thriller “The Bridge (Bron / Broen)“(Sweden/Denmark, 2011-2018, TV-MA, with subtitles), which kicked off the Nordic Noir genre and inspired remakes in the U.S., England, and elsewhere. The first season now available, subsequent seasons roll out each Thursday through July.

The documentary “The One and Only Dick Gregory” (2021, not rated) looks at the life and legacy of the comedian and activist whose work impacted generations.

“Neonoir,” a collection of 26 films from 1970 to 2005 that draw from the classic Hollywood tradition of film noir, includes such iconic crime classics as Roman Polanski’s Oscar-winning “Chinatown” (1974, R) with Jack Nicholson and Faye Dunaway, Lawrence Kasdan’s sultry “Body Heat” (1981, R) with William Hurt and Kathleen Turner, and John Dahl’s cold-blooded thriller “The Last Seduction” (1994, R) with Linda Fiorentino. Dig deeper, though, and you’ll unearth some lesser-known films worthy of rediscovery. Here are a few to start with:

Also new to the service: the streaming premiere of “Preparations to Be Together for an Unknown Period of Time” (Hungary, 2020, not rated, with subtitles), a slippery, seductive investigation of memory, obsession, and delusion;