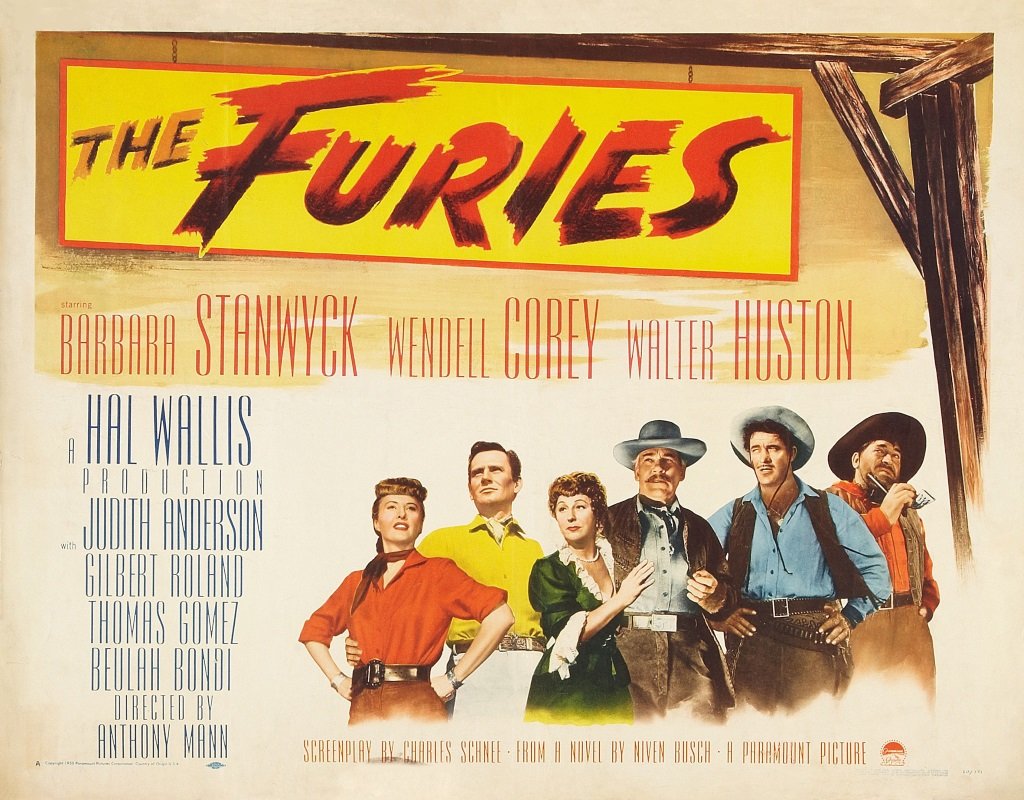 The Furies (1950), the second western from genre giant Anthony Mann (after Devil’s Doorway) and his first big-budget, large-canvas production after an apprenticeship in low-budget thrillers, is a genre hybrid: a psychological western by way of a Gothic melodrama, with a dark, shadowy style right out of Mann’s earlier film noirs.

Barbara Stanwyck is Vance Jeffords, the tough, fierce daughter of land baron T.C. Jeffords (Walter Huston), a flamboyant, self-made man who has taken to issuing his own currency. That arrogance turns out to be his downfall when the playful clash of wills between father and daughter turns hostile after widower T.C. returns home with an equally strong-willed woman (Judith Anderson). The psychological tensions and Freudian undercurrents are right on the surface of Charles Shnee’s screenplay (adapted from the Niven Busch novel). The director was far more subtle in his later westerns but the stark, striking imagery of the unforgiving landscape and the vibrant personalities on the screen are pure Mann.

Huston (in his final film role) plays the grandstanding patriarch as the self-proclaimed monarch of the ranch empire he calls “The Furies” and Stanwyck, equally at home in lavish gowns and the pants and works shirts of the working rancher, matches him every step of the way in their battle of wills. Wendell Corey, so often relegated to milquetoast supporting roles, is all cocksure confidence as a gambler feuding with T.C. and flirting with Vance, and Gilbert Roland, Thomas Gomez and Beulah Bondi co-star. It earned an Oscar nomination for its cinematography.

, iTunes, GooglePlay and/or other services. Availability may vary by service.
The Furies (Criterion Collection) [DVD]

The Criterion DVD features a crisp transfer with minor strobing (it never fails to surprise me how the most minor weaknesses of archival source material become evident in exacting restorations). Film historian and western expert Jim Kitses provides a scholarly commentary track with a strongly psychological reading of the distinctively psychological western, while Anthony Mann himself talks of his career and his films in “Action Speaks Louder Than Words,” a 1967 television interview (shot while he was making his final film) excerpted from the British TV series “The Movies.” Also features an archival 1930 in-camera interview with Walter Huston (obviously staged and scripted, but no less entertaining for it) and a new interview with Mann’s daughter. The set comes with a booklet featuring a new essay by Robin Wood and a 1957 print interview with Mann, and a new printing of Niven Busch’s original novel.