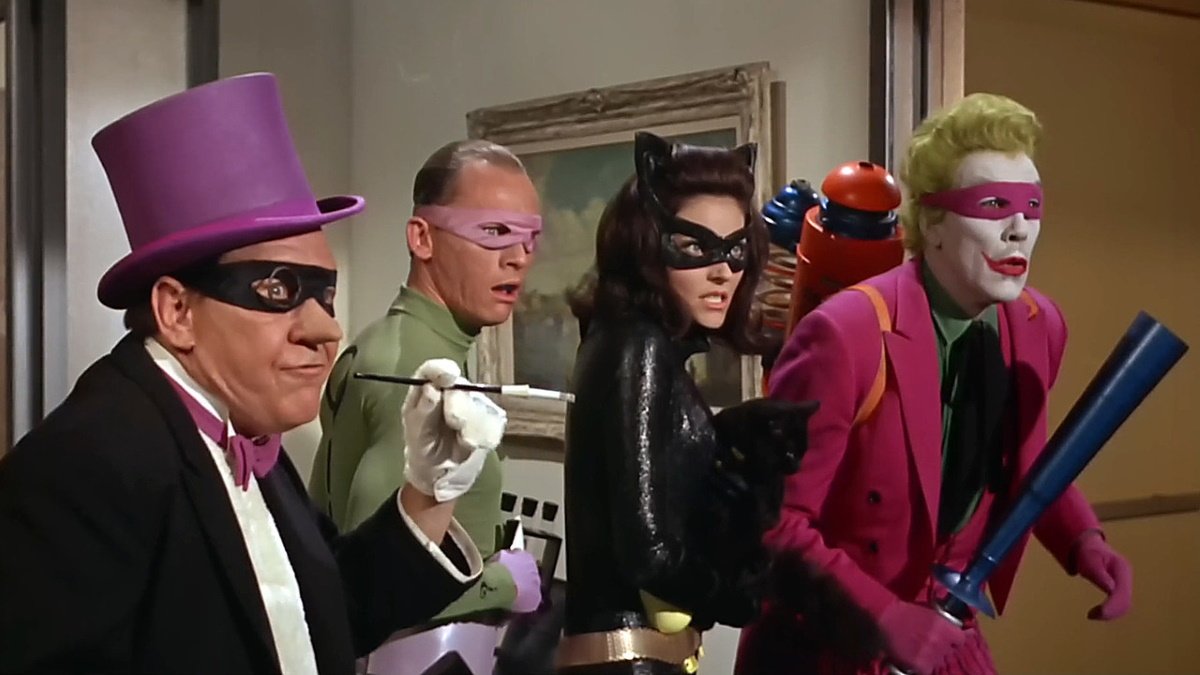 After the iconic comic book superhero became a sensation in the tongue-in-cheek live action spoof, the campy adventure comedy hit the big screen with the feature-length spin-of Batman (1966).

The criminals are, naturally, out to conquer the world, but with a little help from their unending supply of utility belt devices (bat shark repellant, anyone?) our dynamic duo thwart their nefarious plans at every turn. West’s arch deadpan only enhances the painful puns of the overgrown boy-scout, the exaggerated, ridiculously choreographed fight scenes are punctuated by words balloons sporting such onomatopoeic syllables as “Pow!,” “Thud!,” and “Blammo!,” and everything in the Batcave (and Gotham City, for that matter) is thoughtfully tagged with huge block letter signs, lest the crime-fighting duo forget that each device actually does.

The show was embraced by kids as a straight superhero show while adults embraced the self-aware parody. Where TV show ran under 30 minutes an episode (with commercials), the 105 minute film runs a little thin—a little camp goes a long way—but fans of the small screen show will enjoy the spoofing tone throughout. Leslie H. Martinson directs Lorenzo Semple’s screenplay like a big budget TV episode minus the cliffhanger endings.

Alan Napier reprises his role as the faithful butler Alfred, Neil Hamilton and Stafford Repp are Commissioner Gordon and Chief O’Hara, and Madge Blake is the ever oblivious Aunt Harriet.

Originally released before ratings, it’s been rated PG in its later rereleased.

Also on Blu-ray and DVD and on SVOD through Amazon Video, iTunes, GooglePlay, Vudu and/or other services. Availability may vary by service.
Batman (1966) [Blu-ray]
Batman (1966) [DVD]

The special edition Blu-ray and DVD release include two commentary tracks, the first a breezy but repetitive reunion with stars Adam West and Burt Ward, the other by screenwriter Lorenzo Semple Jr. which is strewn with behind-the-scenes dirt, plus three documentary featurettes, a tour of the Batmobile by its creator, and an optional subtitle trivia track.