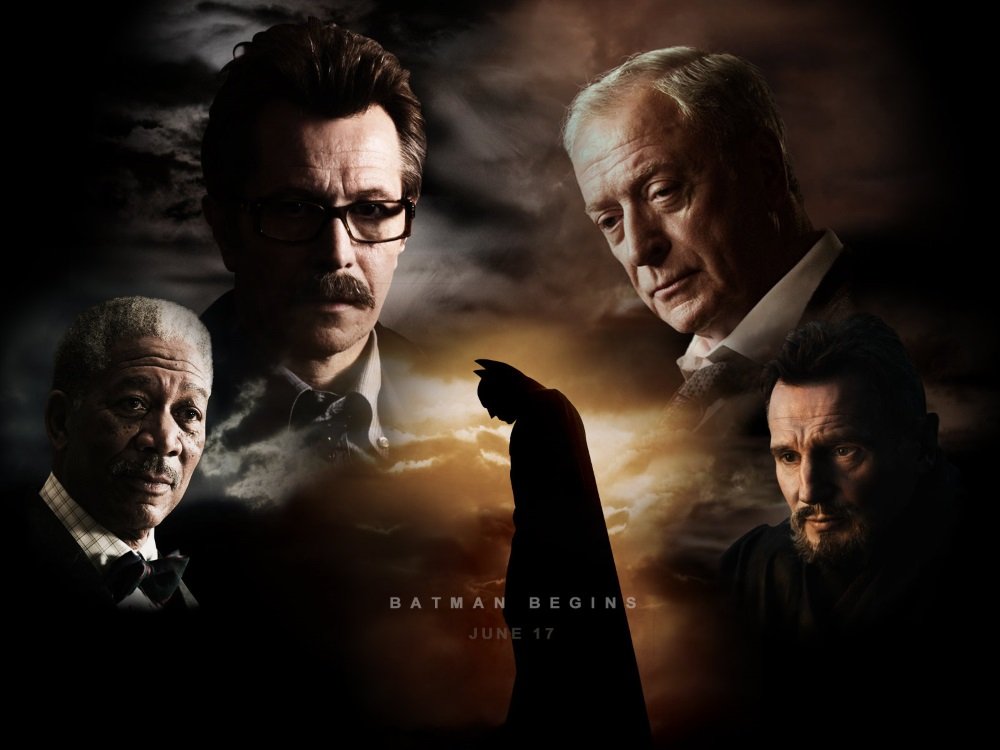 One of the defining films in the elevation of comic book movies to adult fare, Christopher Nolan’s Batman Begins (2005) rebooted the Batman mythos for the big screen, bringing the often lighthearted hero back to the shadows, both figuratively and literally.

It’s quite a leap from the previous Batman revival launched by Tim Burton’s 1989 Batman, a playful take on the dark knight for the modern world, but after his deliriously crazed and creative 1992 sequel Batman Returns, a revolving door of stars in two bloated, ridiculous sequels buried the franchise in the Gotham City graveyard of inconsequential icons. Nolan rescued the Dark Knight in a new approach that returned to the roots of the most mortal (and borderline schizophrenic) of comic book heroes: the violent tales of the early comics, the psychologically brooding rebirth in the seventies, Frank Miller’s gritty revision of Batman’s early days with young Lt. Jim Gordon.

The intense Christian Bale is an inspired choice for the part and Nolan gets the character right: Bruce Wayne is the secret identity and Batman is the real persona. Millionaire playboy Wayne is not a reprieve from crime-fighting, but a carefully built and cultivated identity created to distract from his real work.

Typical of director Nolan, who made his name with the structurally and dramatically ingenious Memento, he constructs this script around complicated flashbacks chosen for dramatic insight over narrative clarity and he directs the film with more interest in the subtext, the mood, and the psychological undercurrent than in the action set pieces. Ultimately it’s an effective method of creating the driven, somewhat psychotic hero, establishing the milieu of corruption and crime, and developing his relationship with the one good cop Lt. Gordon (Gary Oldman) and faithful butler and sounding board Alfred (Michael Caine), not to mention building up his Batcave of goodies. More importantly, Nolan connects to the isolated, nocturnal nature of the dual identity and the theatrics he uses to cast a supernatural aura around him. This Batman is a borderline psychotic obsessive battling childhood trauma in a cape and cowl, swinging through the cesspool of his crime-ridden city to battle the predators that made him an orphan.

Liam Neeson plays Wayne’s teacher and father figure, who trains the future crime fighter as a member of the Shadow Brotherhood in the Himalayas, Cillian Murphy is the demented Scarecrow, Morgan Freeman the Wayne Industries inventor who turns out Batman’s marvelous crime-fighting toys, and Katie Holmes is his love interest both in and out of costume, a spunky assistant DA who takes on the corruption no one else dares attack. Tom Wilkinson, Rutger Hauer, Ken Watanabe, and Linus Roache co-star.

Along with Brian Singer’s X-Men movies and Sam Raimi’s original Spider-Man trilogy, Nolan’s Batman Begins and its sequels helped pave the way for the meeting of juvenile movie franchises and the new sophistication of comic books and graphic novels aimed at college readers and adult collectors. The superhero movie blockbuster is an inevitable meeting of storytelling forms and Nolan is one of its pioneers.

Wally Pfister’s cinematographer was nominated for an Academy Award.

, iTunes, GooglePlay and/or other services. Availability may vary by service.
Batman Begins [Blu-ray]

On Blu-ray and DVD from Warner Home Video with the parody “Tankman Begins” (from the MTV Movie Awards with Jimmy Fallon, Andy Dick, and a special guest Batman) and the trailer.

The 2-disc “Deluxe Edition” features a disc of supplements designed as an “Inner Demons Comic” which directs the navigation possibilities: each page is a different featurette (just movie your cursor onto the page to find the “hidden” button), and you have flip through each one individually (a nice “play all” function would be nice, Warner). Start with the 15 minute featurette “Batman: The Journey Begins,” move on to screenwriter David S. Goyer talking about scripting, “Shaping Mind and Body” (Christian Bale prepares for the role), “Cape and Cowl” (the creation of the Batsuit), “Gotham City Rises” (production design), “Path to Discover” (filming in Iceland), and “Genesis of the Bat” (the comic book history and development of the character, including key writer Denny O’Neal, whose stories in the seventies revived the shadowy dark knight concept and directly inspired the screenplay). Explore the pages and you’ll find interactive explorations of the cape, utility belt, body armor, Tumbler (aka the Batcar), villains and allies, art galleries, a montage of stunt rehearsals. Flip through to the end for a more user-friendly menu to the featurettes, galleries, and files.

The “Deluxe Edition” also comes with a 72-page booklet, featuring reprints of the first Batman comic story by Bob Kane and 2 contemporary comics that inspired the film, next to the case in a slipsleeve.

Exclusive to the Blu-ray are “The Dark Knight IMAX Prologue,” the first six minutes of the film previously shown exclusively in IMAX theaters and presented here in high definition, and the exclusive “In-Movie Experience,” kind of an intermittent audio-visual commentary track with picture-in-picture clips of director Christopher Nolan, the actors, and members of the production staff discussing various scenes throughout the film. The clips are drawn from the featurettes available elsewhere on the disc and only appear intermittently, but they can make for an interesting interactive experience.