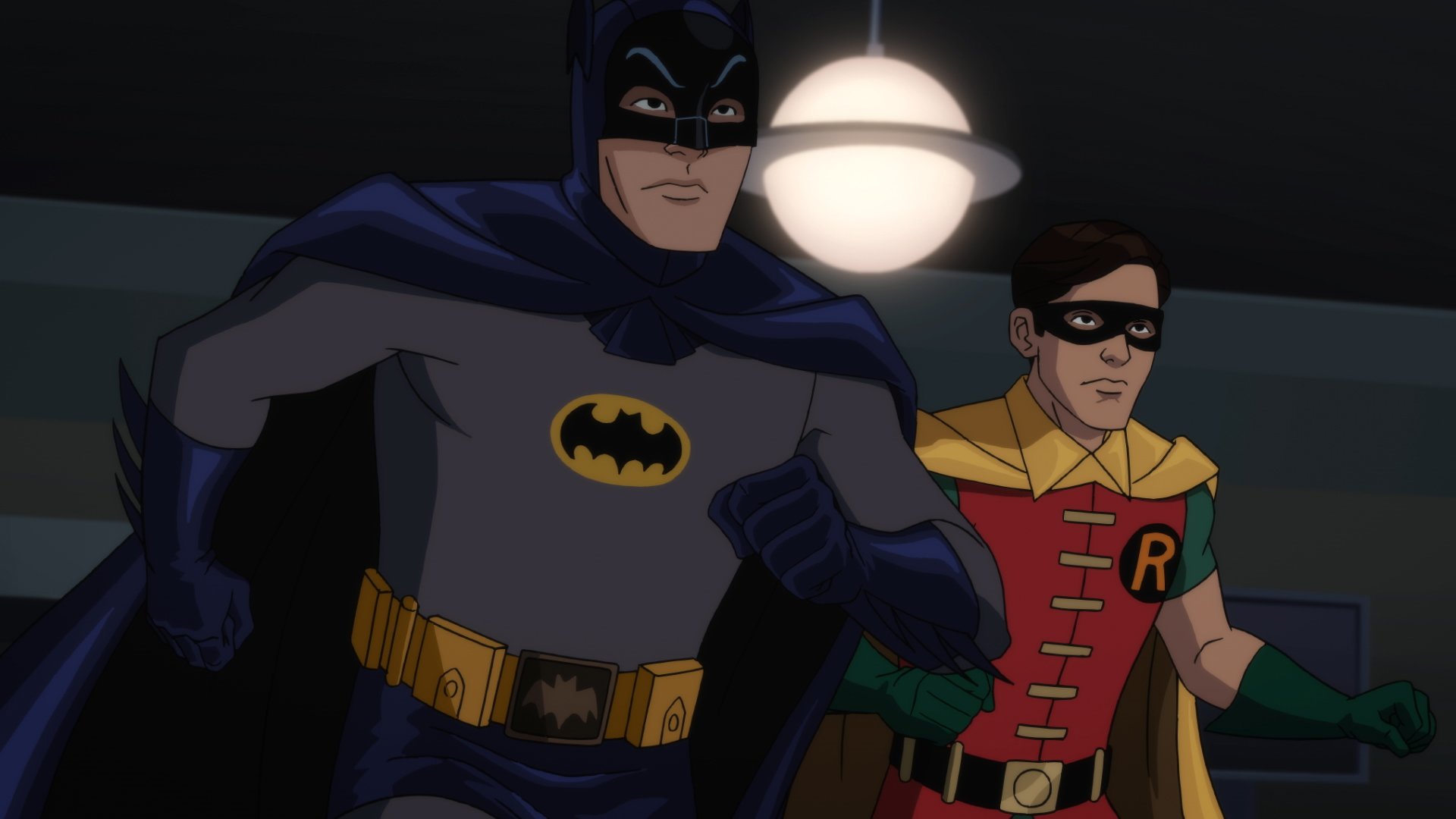 Batman: Return of the Caped Crusaders (2016) is a different kind of animated superhero film, not an adaptation of a graphic novel but a flashback to the tongue-in-cheek 1960s Batman TV series.

The 78-minute DCU Original Animation feature features the hand drawn style of previous Warner animated superhero features (which evokes the simple style of Super Friends and other animated shows of the 1970s), a step up from TV animation but short of the Pixar and DreamWorks Animation standard. To complete the nostalgic wayback machine, Adam West and Burt Ward reunite to voice the Dynamic Duo and Julie Newmar purrs the Catwoman to caricatures of their TV personae.

In other words, this is a lark, a self-aware spoof that embraces the painful puns, alliterative exclamations, and deadpan delivery of the old show, right down to the Bat-gimmicks of the utility belt, with a plot that refuses to take itself seriously. Catwoman teams up with Joker, Penguin, and Riddler to bedevil Batman and Robin with riddles, pranks, and robberies and even concocts a serum to turn the hero into their partner in crime. Instead, it turns Bruce Wayne into an intolerant jerk who boots Dick Grayson (by now the world’s teenager) and Alfred the Butler out of Wayne Manor and transforms Batman into a one-man army taking over Gotham with the help of a buggy Replicator Ray. Holy masked Mussolini!

Batman is a despot in a cape and cowl, the king of all media, and even his own back-up band and chorus line, and Robin strikes an unlikely alliance with Catwoman (still smitten with the Bat) to stop the reign to Bat-terror. Her purring flirtatiousness with the Boy Wonder, who insists on driving her Catmobile (he does, after all, have his learner’s permit), is the high point of this exercise in eccentricity.

This is a superhero adventure that refuses to take itself seriously. It works best as a knowing tribute to a cult show, playing to fans already in on the joke. The supporting voice cast channels the spirits of Cesar Romero, Frank Gorshin, and Burgess Meredith as Joker, Riddler, and Penguin and, in an inspired in-joke, a trio of Catwomen call out Lee Merriweather and Eartha Kitt. The visual sound effects invent a whole new vocabulary beyond *Pow!* and *Boff!* and while the animation has a stiffness that, though appropriate to the panel-like posing of the live-action show, tends to stiffness and lacks the pop-art mix of the mundane and the surreal, it also allows the filmmakers to populate the screen with dozens of blank-faced Batmans in a free-for-all with a roll call of classic TV villains (the ultimate call-out of animated cameos) and send the cast into space for an episode.

It’s an exercise in juvenilia for grown-ups. Saints preserve us!

, iTunes, GooglePlay, Vudu and/or other services. Availability may vary by service.
Batman: Return of the Caped Crusaders [DVD]

Blu-ray and DVD from Warner Home Video. Only the Blu-ray includes the featurettes “A Classic Cadre of Voices” and “Those Dastardly Desperados,” plus bonus DVD and Ultraviolet Digital HD copies of the film.