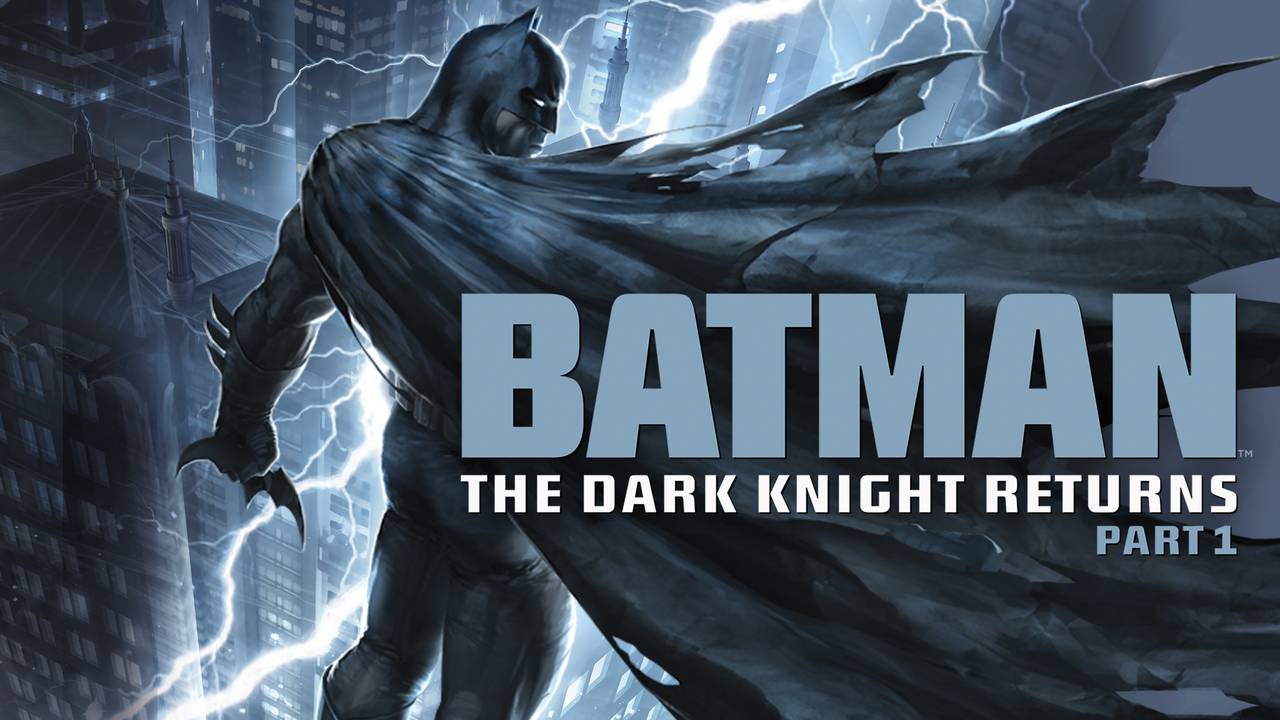 Frank Miller’s 1986 landmark “Batman: The Dark Knight Returns” is one of the most revered graphic novels ever released. Originally released as a four-issue mini-series, it pushed the boundaries of how mainstream comic book publishers allowed its marquee characters to be presented, and presented its superhero dystopia in a graphically dynamic manner.

Given how beloved the source material is, any screen adaptation is doomed to be held to high standards. If you accept the fact that no conventional animated film could ever really capture the graphic edge of Frank Miller’s dystopian vision or the psychotic intensity of his vigilante fantasy, then you can appreciate how much the direct-to-video animated feature Batman: The Dark Knight Returns (2012-2013), directed by Jay Oliva, gets right in its translation to a more mainstream audience.

Peter Weller voices old man Bat as an angry, bitter, seventy-something resurrection of the once-retired hero who comes back by sheer force of will in a Gotham City spiraling into chaos, and Ariel Winter (Modern Family) is Carrie, the girl who becomes his Robin. Oliva manages to capture the best and the worst of Miller. Streamlined to a more conventional narrative, the animated film loses the power of Miller’s defining graphic design but is accurate to the story, which becomes more of cartoon of weak-willed liberals in a savage world right out of an Ayn Rand fantasy.

The story was broken into two feature-length parts and Part 2 brings in the Super Friends, which Miller reimagines as vigilantes and old soldiers beholden only to justice in a world where the figures of authority are more interested in self-image than public good. That makes Batman the great libertarian hero: the maverick loner more interested in protecting individuals than institutions and making sure the most savage criminals are duly punished (there is a real streak of Old Testament retribution). The Miller philosophy is pared down to the bone in the inevitable showdown between Superman (voiced by Mark Valley), the patriotic good soldier dedicated to protecting the country, and Batman, beholden to nothing but his conscience.

Oliva takes some shots right out of Miller’s graphic novel, and though the clean line-drawing animation is very different from the heavy wood-cut slashes that look carved in to the graphic novel, the big, blocky, heavy character designs of Bats and Supes are preserved, as is the gruesomeness of the smiling dead left behind by the Joker (voiced by Michael Emerson with a perfectly underplayed glee for chaos. The fight scenes are all about the sheer force of will and physical endurance of old man Bats pushing his body past its limits and the deliberate pacing and pounding action is more about the force of the blows than the grace and spectacle of the choreography.

Not only does this have a body count appropriate to the savagery of the world gone wild violence, but some of it is shockingly cold-blooded. Oliva creates an eerie atmosphere for the last act showdown, which occurs under the gentle fall of nuclear fallout looking like ashy snow, and makes blindly-aggressive Cold Warrior Ronald Reagan look even more like the walking dead than Miller did in the original graphic novel.

It would take a far more daring approach to really do justice to Miller’s groundbreaking work, which is defined as much by his graphic design as by his writing, but this is at the very least interesting and at best unexpected.

Also features the voices of Michael Emerson as The Joker, Paget Brewster as Lana Lang, David Selby as Commissioner Gordon, and Wade Williams as Harvey Dent.

On Blu-ray and DVD in separate editions or combined in a “deluxe” presentation.

Part 1 includes the featurettes “Batman and Me: The Bob Kane Story,” previews of upcoming DC Universe animated original movies, and two bonus “Batman” cartoons from the animated series. Exclusive to the Blu-ray is the featurette “Her Name is Carrie… Her Role is Robin” and a digital comic.

Part 2 comes with the featurettes “Superman vs. Batman: When Heroes Collide” and “The Joker: Laughing in the Face of Death,” the dense 45-minute “From Sketch to Screen: Exploring the Adaptation Process with Jay Oliva,” and two bonus episodes from “Batman: The Animated Series” and one from “The Brave and the Bold.” The Blu-ray also includes a digital comic excerpt from Miller’s original graphic novel, and a bonus DVD.