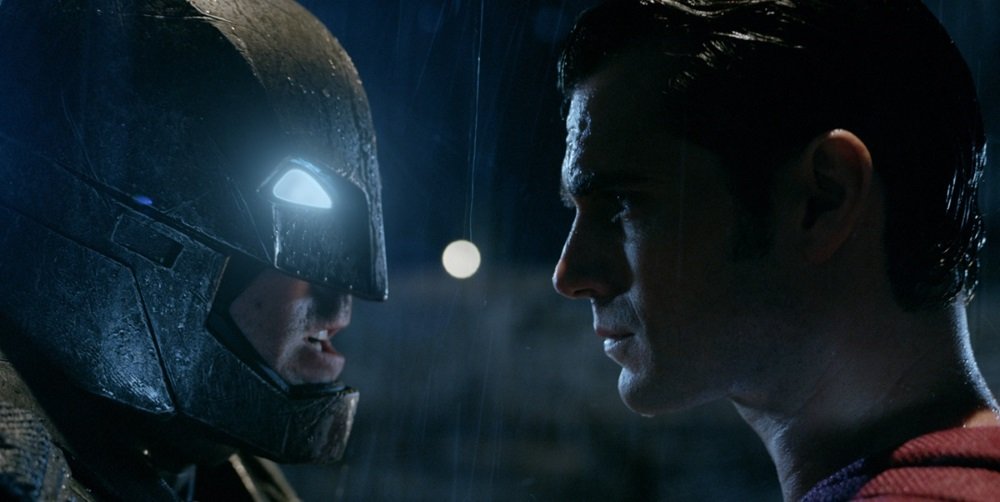 The smartest thing about Zach Snyder’s Batman v Superman: Dawn of Justice (2016) is its revisionist take on the destruction that concluded his Superman reboot Man of Steel. After an unnecessary (but at least relatively brief) recap of the Batman story, we are plunged back into the battle but this perspective comes from the ground. Superman (Henry Cavill) is simply an agent of destruction in the sky as Bruce Wayne (Ben Affleck with a hint of stubble and gray in the temples) watches the death toll on street in horror.

We are offered the perspective of the mortal bystander to a battle between the modern gods and finds our hero at best distracted from and at worst oblivious to consequences of a clash of the titans over urban Metropolis. In contrast to the abstracted spectacle of Man of Steel, this destruction is more present, more weighted, more real, and it evokes 9/11 imagery without pandering to it. Batman / Bruce Wayne (let’s just call him BatWayne, as there is no distinction between the two apart from the growling delivery behind the cowl), ever the pragmatist, realizes that with great power comes great danger to the rest of us. And so he begins hatching his plan to take down the man from another planet.

A promising opening to a film that slips into familiar cape-and-cowl melodrama: we get BatWayne obsessively pursuing his Krypton bomb, SuperKent in righteous dudgeon over the vigilantism of Gotham City’s Batman, and Lex Luthor (Jesse Eisenberg), reconceived as a twitchy, hyperactive young genius driven by daddy issues and corporate arrogance, playing the two off one another as he plots their mutual destruction. The plotting is a little foggy and the motivations dubious, and the film almost laughably takes pains to assure us that, this time, the battles wind up in deserted waterfront ruins or an abandoned island off Metropolis (because it’s not as if prime real estate in the biggest city of the DCU has any value).

This is a film that offers provocative contradictions—that same Superman who failed to pull General Zod from Metropolis ground zero for their new gods smackdown now breaks the sound barrier to get to Brazil to rescue a single little girl from a burning building and then watches stonefaced as the grateful poor peasants bow to him as if he were the second coming—and then fails to even acknowledge the God complex it reveals. Behind the earnest benevolence and stony, ever-serious expression, Superman is an arrogant, self-righteous creature who can’t even control his own temper when fighting the Bat. “You don’t understand,” Supes impotently protests, and then refuses to explain, content to simply pummel him into obedience.

There’s also romance with globehopping journalist Lois Lane (Amy Adams), warrior queen Wonder Woman (Gal Gadot) shoehorned in the margins of the story and the finale (and a breath of fresh air through the stuffy production nonetheless), a thoroughly forgettable Golem creature called forth from an interstellar genetic cocktail like a Kyptonian Frankenstein’s monster, and lo-fi teases of additional iconic DC comics heroes in anticipation of the upcoming team movie “Justice League.” And after all these years we find out that Metropolis and Gotham City are practically next door, like San Francisco and Oakland relocated to the East Coast. That brings up a whole new set of questions, like why has Superman never bothered to be a hero to a city mere seconds away flying at top speed and how is that he’s just now realizing that there’s a vigilante in Gotham who is summoned by his own beacon?

It’s just another lazy contrivance that shows the sloppy world building under the stewardship of Zach Snyder. Complain all you want about the overstuffed Avengers movies from Joss Whedon, those films have been thought through to provide not only a sturdy narrative framework but the very foundation of an entire ecosystem of heroes, villains, and government agencies, and the moral issues that go with the playing masked superhero. Snyder’s humorless, self-serious approach, dark and dreary palette, and numbing spectacle bludgeoning viewers with ever bigger portraits of destruction seems out of step with the spry, fleet, witty, and often giddy heroics of the Marvel movies. There clearly is an appetite for this brand of comic book movie, but I’ve lost the taste for Snyder’s recipe.

The film was released to theaters in a 2½-hour cut that is rated PG-13, but Snyder created a longer, R-rated “Ultimate Edition” version for DVD and Blu-ray release with 30 minutes of additional footage not included in the original theatrical version and the extra scenes fill in subplots and supporting characters. HBO Max offers the extended “Ultimate Edition.”

) and SVOD through Amazon Video

(A longer review, along with details on the “Ultimate Edition” and supplements on the discs, is on my sister website Parallax View here)

The Blu-ray and DVD editions include commentary, featurettes, and other supplements, in addition to the extended “Ultimate Edition” of the film.