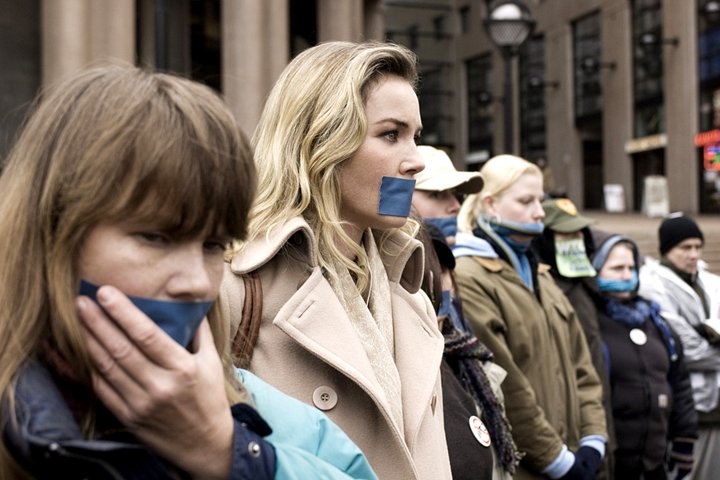 Battle in Seattle (2008), the directorial debut of actor Stuart Townsend, is a conventional drama about the unconventional protest landmark: the 1999 WTO protests in Seattle, Washington, a real event explored through the familiar fictional stories of various protesters, delegates and bystanders. Like far too many films and TV programs set in Seattle it was largely shot in Vancouver, Canada, just a couple of hours north, but key scenes are staged at distinctive Seattle landmarks and the use of documentary footage gives the street scenes a gripping immediacy and authenticity.

Martin Henderson is the ostensible center of the ensemble cast, a passionate protest organizer who coordinates the maverick groups and peppers his pep talks with the gospel of non-violent protest. But he’s not too busy to take time out for a rocky romance with Michelle Rodriguez, an angry guerrilla activist who (like the rest of the restless volunteers) takes her turn and tells her story. Connie Nielsen is Townsend’s most exasperating character, a superficial TV reporter who takes a symbolic stand instead of doing something genuinely revolutionary, like cutting through the noise with real reporting. And the harrowing experience of pregnant bystander Charlize Theron and the turmoil of cop Woody Harrelson is a manipulative gut-punch out of proportion to the story they have to tell. It also stars André Benjamin, Jennifer Carpenter, Isaach De Bankolé, Joshua Jackson, Ray Liotta, Tzi Ma, Ivana Milicevic, Rade Serbedzija, and Channing Tatum.

Townsend’s real triumph is in getting beyond the sound bites to grapple with the issues behind the protest. He illustrates the methods and organization of the loose affiliation of protesters that caught the WTO and the local authorities by surprise and effectively shut down the city with non-violent tactics. He captures the chaos of the anarchist violence and police clashes without losing the viewer in the confusion. And his most interesting (though least developed) story takes us into the tensions inside the meeting, where another protest was brewing among the representatives of the Third World nations whose concerns were being ignored. Townsend doesn’t try to create a causal link, just show the parallels between those working within the system and those working outside for the same thing, and throw a light on a story lost in the media coverage of the more visible public protests.

Townsend’s efforts to be honest to the spirit of the event carries the film through its sloganeering and familiar backstage dramas. He believes in the politics and the passion of the protesters to make their concerns heard over the media noise focused on the spectacle of conflict. At its best, Battle in Seattle is a compassionate history lesson. But is it too much to ask that the fictional scenes of the film have at least some of the complexity and unpredictability of the real life theater?

Also on disc and SVOD on Amazon Video

and other services
Battle in Seattle [DVD]