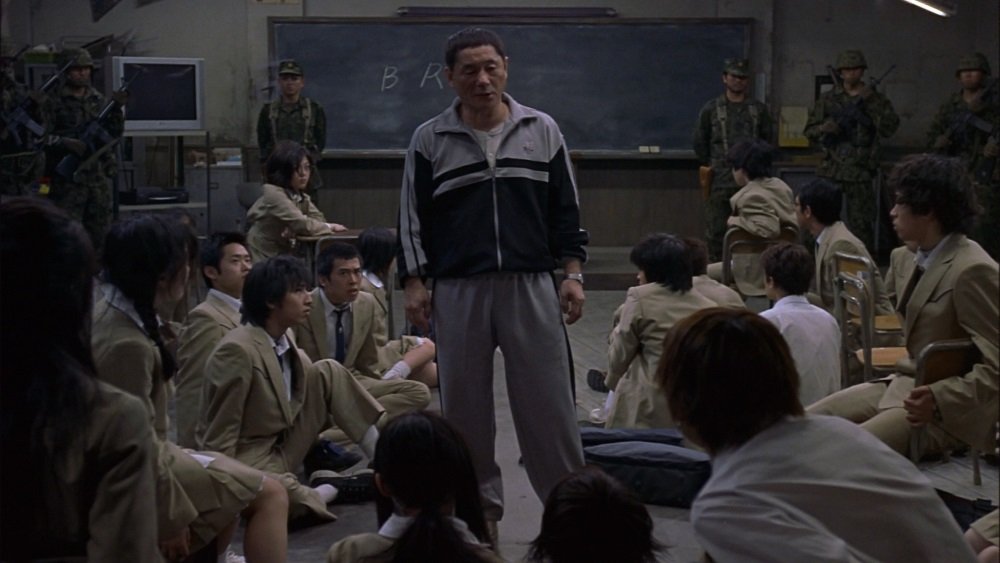 It was a 21st century version of a fifties youth gang drama, rooted in the adult panic at the sudden rise of youth violence in Japanese society, but was too close to the real-life events of Columbine High School for American tastes. It took the release of The Hunger Games to get this high-school-kids-fight-to-the-death thriller an American release.

Directed by Kinji Fukasaku, the madman of Japanese yakuza cinema, from a novel by Koushun Takami, you could call it “Rebel Without a Chance”: a wicked social satire that blends Lord of the Flies, Massacre at Central High, the social commentary of Peter Watkins, the excess of Japanese manga, and the culture of nihilistic video games.

Takeshi Kitano, the Japanese comedian who became an international superstar as an implacable gunman in a series of violent gangster films, takes on the adult role as a bullied high schoolteacher who has his idealism pounded out of him. He gets his revenge by overseeing his own 9th grade class thrown into the arena, or in this case dropped on an isolated tropical island and provided with weapons, and he takes a little too much pleasure as he demonstrates the effectiveness of the bombs that have been strapped to their necks.

Similarities to The Hunger Games, which plays the gladiator games as a form of punishment, repression, and control by a tyrannical dictator, begin and end with the premise. This savage social satire revels in the brutality and gore and plays it for dark comedy and gallows humor, a teen melodrama gone feral as cliques fall apart under fire and young love is literally under the gun. Which means the audience for this spectacle is limited indeed, but for those with a taste for sanguine satire it should hit the spot.

Add to My List on MUBI or stream free on Kanopy, which is available through most public and college library systems.

Also on Blu-ray and DVD and on SVOD through Amazon Video, iTunes, GooglePlay and/or other services. Availability may vary by service.
Battle Royale: Director’s Cut [Blu-ray]

On Blu-ray and DVD in single-disc edition and in deluxe four-disc “The Complete Collection” sets. These editions, packaged in a bookleaf case with slipsleeve pages, feature both the theatrical version and the extended director’s cut, plus the 2003 sequel “Battle Royale II: Requiem” directed by Kenta Fukusaku (who took over when his father, Kinji, passed away) and bonus DVD with 52-minute “The Making of Battle Royale,” footage from the press conference, test footage, and numerous featurettes and other archival footage.