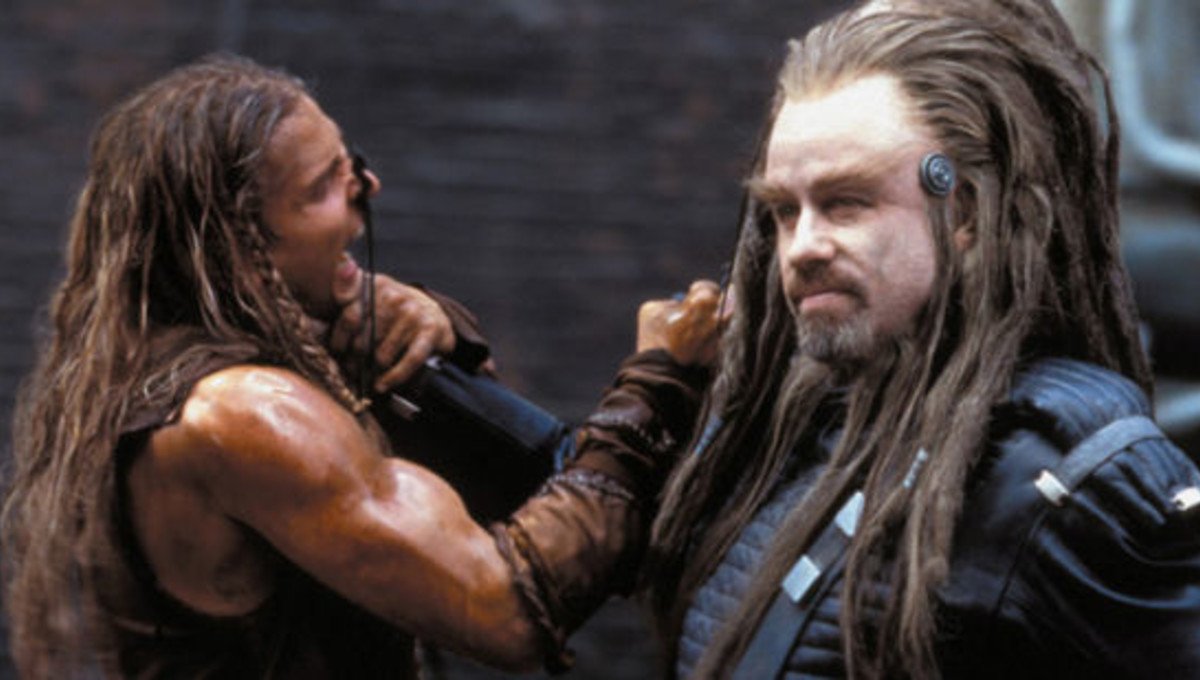 John Travolta, one of Hollywood’s most visible Scientology cheerleaders, dreamed of bringing Scientologist founder L. Ron Hubbards’ Star Wars-inspired sci-fi epic to the big screen for years. Be careful when dreams come true. Battlefield Earth (2000) is hilariously, flamboyantly, aggressively bad, a pulp fantasy built on same hokey tropes and clichés that were tired before Hubbard ever dreamed of becoming a cult guru to the rich and deluded.

The year is 3000 and the place is Earth. After a millennium of brutal subjugation by the Psychlos (seemingly an unholy mating of Star Trek‘s Klingon and Ferengi races), humans live like cavemen in the irradiated wilds, foraging through a dying Earth. Barry Pepper, in flowing locks and an unchanging expression of determined sincerity is our everyman hero Jonnie Goodboy Tyler, who goes in search of a better land and discovers the Psychlo occupation, a race of eight-foot alien slavers and intergalactic corporate pirates sucking the planet dry of resources in the name of profit.

Travolta plays the part of the devious dreadlocked alien with outsized glee and hammy excess, tossing his head back with a flourish to cackle every time he achieves the perfect double cross, and Forest Whitaker, as his dim assistant, fumbles and grovels as a junior league con-artist constantly outmaneuvered by his master blackmailer boss. They’re a toxic Abbot and Costello team in a culture so mercenary and dimwitted that you wonder how this backstabbing race ever managed to work together enough to build an intergalactic empire.

Jonnie, meanwhile, recruits an army of human rebels, teaches them to fly harrier jets without a manual (perfectly preserved and even gassed up after all these centuries!), and launches the revolution. Can’t you just see Mel Gibson in the role screaming “Freedom!!!” to a plucky tribe of hunters and gatherers wielding machine guns and lobbing missiles ready to defeat the most powerful race in the galaxy? Heart, soul, and courage will get you only so far. What you really need is an enemy so stupid they invite their own demise. And a few Harrier jets don’t hurt either.

The film wasn’t just a flop. It won seven Golden Raspberry awards and has been a mainstay on the IMDb bottom 100 films, and it ultimately bankrupted the studio that produced it when it was sued for fraudulent bookkeeping. The Psychlos would have been proud of such mercenary bookkeeping. This is best seen in groups for maximum heckling.

, iTunes, GooglePlay and/or other services. Availability may vary by service.
Battlefield Earth [DVD]

The DVD from Warner Bros. (no Blu-ray edition yet – you can that be?) with self-serious commentary by director Roger Christian and designer Patrick Tatopoulos, the documentary featurettes “Evolution and Creation” and “Creative Visual Effects,” John Travolta’s makeup test, and a storyboard montage among its supplements.