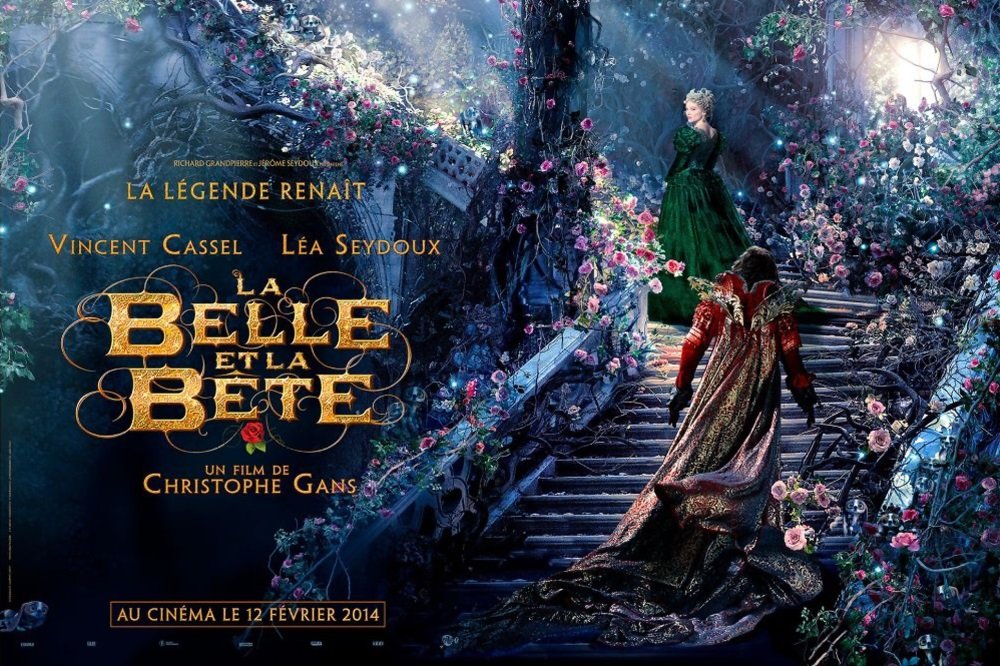 Beauty and the Beast (France, 2014) – No, not the new Disney live-action musical but a lush French version of the classic fairy tale starring Léa Seydoux (Blue is the Warmest Color) as Belle and Vincent Cassel as the hirsute Beast.

Belle is the youngest and sunniest child of a prosperous merchant (André Dussollier) . Her sisters (Audrey Lamy and Sara Giraudeau) are haughty and lazy society creatures, one brother (Nicolas Gob) is a spendthrift and the other has banked his future on taking over father’s business. Then his business flounders when his ships are wrecked and lost and debts force them out of the city and into a country home, where Belle thrives but her city-loving siblings sink into resentment and self-pity. As father attempts to recover his lost business and gets tangled in his son’s recklessness, he ends up in the hidden kingdom of the cursed Beast and is made his prisoner… until the guilt-ridden Belle takes her father’s place in the Beast’s marvelous magic kingdom.

Christophe Gans (Brotherhood of the Wolf) directs this lavish and colorful French film based on the classic tale, which he frames as a bedtime story told by a mother to her young children and directs like a grand fantasy. The enchanted kingdom magically hidden in the forest is beautifully designed and grandly presented, with a castle overgrown with flowering vines that burst with color as the ancient rock beneath seems to be crumbling away, and Seydoux’s Belle takes it all in with a sense of wonder and delight even as she glowers at the gruff but gentlemanly Beast. There are cute magical puppies that look part monkey and giant enchanted statues hidden and half-buried all over the ground, giving the place a marvelous weirdness as well as beauty, and it ends on a grand battle with a brutal human villain (Eduardo Noriega) who invades the kingdom with his gang of thieves. It’s a glorious canvas with a grand visual scope.

What’s missing is any sense of romantic attraction or bond of friendship between Belle and the Beast. Seydoux brings passion and courage to her role but the CGI-enhanced face of Cassel’s Beast costume is flat and inexpressive, leaving him an imposing and dramatic figure with little dimension. But it also embraces the family, giving Belle’s siblings an opportunity to grow up and take charge in a redemptive action that I’ve never seen in other adaptation. The love story lacks a beating heart, to be sure, but it is lovely to look at and at times enchanting, a beautiful and inventive spectacle, and it ends with a nice touch that nods to the wonder of fairy tales and stories.

Add to My List on Peacock or to My List on Criterion Channel or stream free on Hoopla, which is available through most public and college library systems.

Also on Blu-ray and DVD from Shout! Factory and on SVOD through Amazon Video

, iTunes, GooglePlay and/or other services. Availability may vary by service.
Beauty And The Beast (2014) [Blu-ray]

This is a bright, vibrant movie, bursting with color and filled with detail. The Blu-ray is superb. It looks like it was shot digitally and the disc has a clean, bright, sharp look. The English dub version is the default version when you hit play. If you want the original French language version, you have to choose it in the menu and then turn on the subtitles in a separate section. The subs are actually close captions with sound effects and music noted along with the dialogue translations.

Both Blu-ray and DVD version include interviews with director Christophe Gans (19 minutes) and actors Vincent Cassel (15 mins) and Léa Seydoux (9 mins), all in French with English subtitles. The Blu-ray also includes bonus DVD and Ultraviolet Digital HD copies of the film.