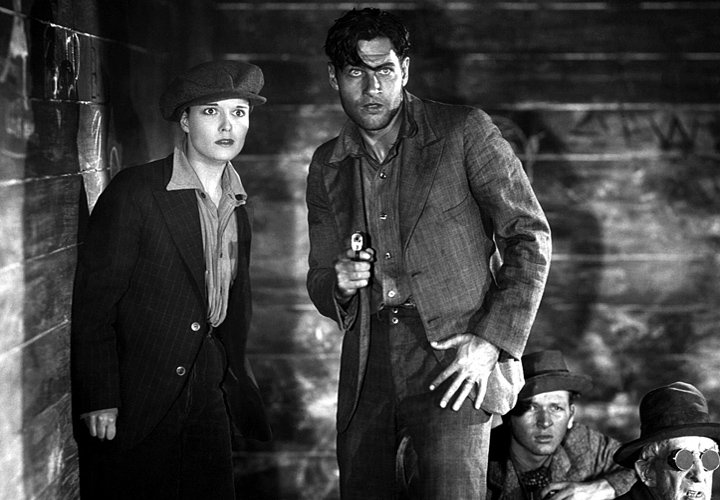 William Wellman was one of the most versatile directors of his day, making everything from comedies and musicals to gritty dramas and war movies, and his World War I epic Wings (1927) won the first Academy Award for Best Film, but in the late 1920s and 1930s he directed some of the most interesting films about struggles before and during the depression. Beggars of Life (1928) was made before the stock market crash but released in the aftermath, so while it’s not technically a response to the Depression, its portrait of hoboes riding the rails and forming a kind of outsider society was in tune with the times. Today, however, it is best known for Louise Brooks, the petit dancer turned actress who never became a star in America in her lifetime but starred in two great German silent films, Pandora’s Box and Diary of a Lost Girl, and became a cult figure in retirement.

Brooks is Nancy, a young woman who kills her violent stepfather in self-defense (presented as a flashback, it’s a startling and powerful scene which Brooks underplays with haunting pain), and Richard Arlen is Jim, a boyish beggar who stumbles across the body and helps her escape. He dresses her in men’s clothes and teachers her how to ride the rails with the rest of the tramps on the road, landing in a rough hobo camp where Oklahoma Red (Wallace Beery) rules through intimidation. Figuring out that this delicate “boy” is actually a girl (and seriously, who was she fooling?), he claims Nancy as his property and puts the couple through a kangaroo court, a great scene that straddles comedy and horror. Beery delivers a big, blustery performance as he transforms from predator to protector, the handsome Arlen at times he reminded me of a young Paul Newman, and Brooks is incandescent in her best role in an American films (she immediately left for Europe to make the movies that made her reputation).

Based on the memoir by “hobo author” Jim Tully, who rode the rails through the 1920s, and featuring a rare integrated cast, its portrait of the armies of hobos is part homeless underworld and part romanticized escape, but it looks ahead to Wellman’s great depression-era dramas Wild Boys of the Road and Heroes For Sale, which presented a much more harrowing and desperate portrait of hobo life.

It was shot as a silent film but released in 1928 with a synchronized music track and padded out with new sound scenes. Kino presents Wellman’s original cut of the film, a pure silent film with a musical score compiled and performed by The Mont Alto Motion Picture Orchestra, partly incorporating elements from Paramount’s original cue sheets from 1928.

On Blu-ray and DVD with two new commentary tracks (one by William Wellman, Jr., and the other by film historian and Louise Brooks Society founder Thomas Gladysz) and a booklet with an essay by film historian Nick Pinkerton.
Beggars of Life [Blu-ray]

The 1925 silent classic Varieté is one of the great examples of German Expressionist Cinema at its height. It stars Emil Jannings as Boss Huller, once a famed trapeze artist, now grounded by an accident and running a cheap girlie show in a carnival sideshow to support his wife and child, and Lya de Putti as an exotic, orphaned young woman who comes looking for a job. She becomes his star act and ends up seducing Boss, who runs off with her to create a new trapeze act with her. It’s all told in flashback as he’s about to be released from a ten-year prison sentence, and his tale involves a love triangle with a trapeze superstar (Warwick Ward), betrayal, overpowering obsession and jealousy, and a fatal “accident” during their daring trapeze act.

Jannings is a commanding, brooding presence who radiates intense emotion and director E.A. Dupont, working with the great cinematographer Karl Freund (The Last Laugh, Metropolis), uses the camera to express both the anxieties and emotions of Jannings’ Boss and the danger and thrill of the daredevil trapeze act. They fill the film with extreme angles and a moving camera that, at its most vertiginous, swings with the trapeze artists high above the crowds. It’s a powerful silent classic with operatic emotions and dynamic imagery and, like the landmark The Last Laugh before it (also starring Jannings and featuring Karl Freund’s cinematography), it was hugely influential.

Kino presents the 2015 restoration of the film on Blu-ray and DVD with two new scores, the bonus 1922 silent film Othello with Jannings and de Putti, a visual essay, and a featurette on the score created by the Berklee Silent Film Orchestra.
Varieté (1925) [Blu-ray]

William S. Hart stars as trail guide Buckskin Hamilton in Wagon Tracks (1919), a “Story of the Santa Fe Trail” (in the words of the film’s intertitles). Buckskins is a son of the new frontier determined to avenge the death of his younger brother, who was shot on a riverboat while returning from medical school in the East. Though a pretty young woman has confessed to shooting him—it was an accident but she still feels guilty—Buckskin is convinced that her gambler brother her shifty fiancée were involved. As they just happen to be on the wagon train he’s guiding west, he uses the opportunity to find the truth, but his personal quest is complicated when a settler kills a member of an otherwise peaceful Indian tribe and the tribe threatens to attack unless justice is satisfied.

William S. Hart, with his lean, weather-beaten face and stony, impassive manner, was the “good bad man” of silent movie westerns and one of the first cowboy heroes of the movies, and he took a firm hand shaping his persona by producing his own pictures. Wagon Tracks was made at the height of his success with his regular collaborators—director Lambert Hillyer, writer C. Gardner Sullivan, and cinematographer Joe August—and it features striking rugged locations, an impressive attention to detail in the props and costumes, and a refreshingly sympathetic portrait of the Native American. The story seems simplistic to modern sensibilities but the filmmaking is strong and evocative and the poetic justice of the final reel is satisfying and dramatically potent.

On Blu-ray and DVD from Olive, mastered from a print preserved by the Library of Congress. It shows wear and surface scratches, with minor distortion and buckling in the final reel, but it shows great detail and is color tinted. Silent with a lovely original piano score by Andrew Earle Simpson. No supplements.
Wagon Tracks [Blu-ray]

The Undesirable (1914), an Hungarian drama from Mihaly Kertesz, a filmmaker who would go to Hollywood and change his name to Michael Curtiz, is the kind of hoary but lively melodrama we associate with early cinema. Adapted from a stage play, the story concerns a young woman who, as her father dies, learns that he is actually her uncle who adopted her after her real mother killed her real father, a violent brute. With her entire life upended, she gets a job as a maid to a rich couple, only to be accused of a crime she didn’t commit, while her mother, freed after serving a 15 year prison sentence, goes in search of her. There’s star-crossed romance, mistaken identity, arrogance, prejudice, and tragedy along the way to a happy ending.

It’s utterly silly and quite naïve compared to the kinds of films being made in the U.S. and Western Europe at the time, but a curious time capsule and a rare glimpse of the early, pre-Hollywood work of Curtiz, who become the great Warner Bros. studio director of The Adventures of Robin Hood, Casablanca, and Mildred Pierce fame. Long believed lost, a print was discovered in a New York City basement and repatriated to Hungary, where it was restored as a treasure of Hungary’s cinematic legacy and given a superb new musical score by composer Attila Pacsay. Though hardly a lost masterpiece, it is an interesting artifact from a country whose silent legacy is not well represented.

On Blu-ray and DVD in a superb restoration, with strong, bold images, good contrast, and little visible damage. No supplements.
The Undesirable [Blu-ray]