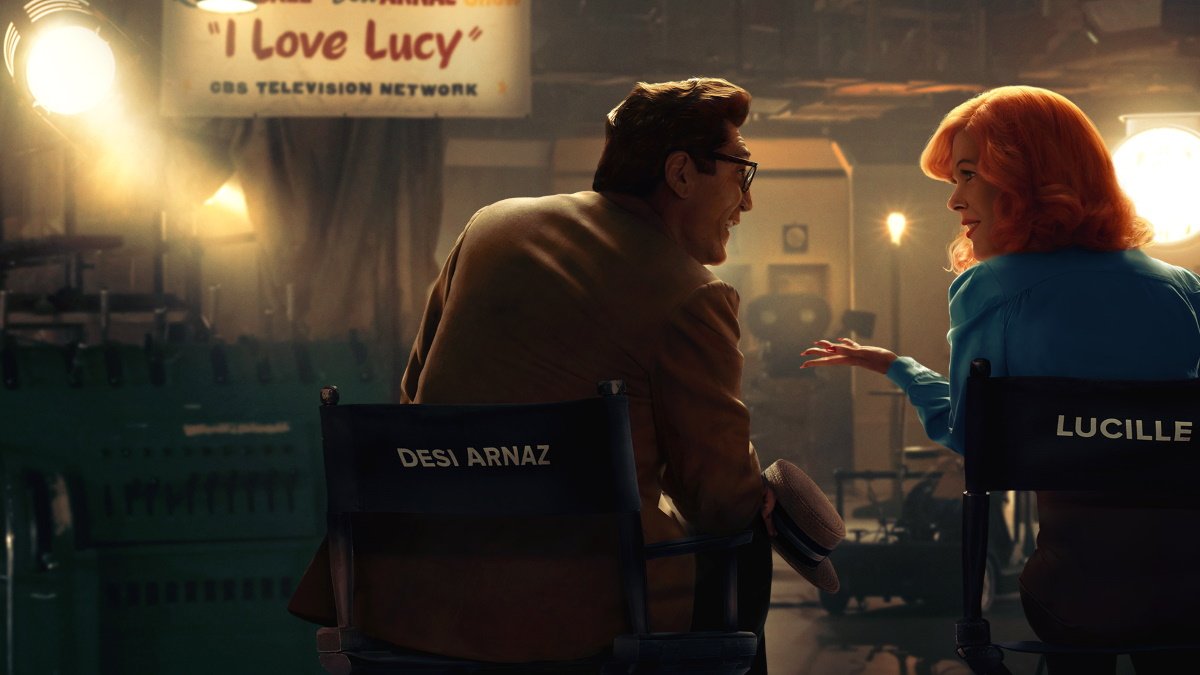 Nicole Kidman and Javier Bardem star as Lucille Ball and Desi Arnaz in “Being the Ricardos“ (2021, R), Aaron Sorkin’s behind-the-scenes drama set over a volatile week in 1953 during production of the groundbreaking sitcom “I Love Lucy.” The personal and professional challenges of the married couple are amplified by a tabloid marriage scandal, a red-baiting smear, and a pregnancy that dares break TV taboos of the time. There is no mistaking the Sorkin rhythms and sharp wit of the dialogue volleys (not to mention rearranging the historical timeline for dramatic effect). And he surely draws from his own TV experiences to celebrate the creative partnership of Ball, attentive to every comic beat of the show, and Arnaz, the business mastermind whose ideas and insights made him a TV pioneer. J.K. Simmons and Nina Arianda play series costars William Frawley and Vivian Vance and Alia Shawkat, Jake Lacy, and Tony Hale costar as the show’s writing team. (Amazon Prime Video)

In the satire “Don’t Look Up“ (2021, R), two astronomers (Leonardo DiCaprio and Jennifer Lawrence) try to warn humankind about a planet-killing comet on a collision course with Earth while the 24 news cycle treats it as entertainment fodder and the public politicizes the whole thing. Writer/director Adam McKay uses the premise as a stand-in for the debate around climate change and lines up a star-studded supporting cast, including Meryl Streep, Cate Blanchett, Jonah Hill, Mark Rylance, Tyler Perry, Timothée Chalamet, and Ariana Grande. (Netflix)

“Encanto“ (2021, PG), an animated musical about a young woman looking for her place in a magically-gifted family in a charmed Colombian village, features original songs by Lin-Manuel Miranda. It streams six weeks after debuting in theaters. (Disney+)

“1883: Season 1“ (TV-MA), a prequel to “Yellowstone,” stars Tim McGraw and Faith Hill as the first generation of the Dutton clan travelling the Oregon trail to stake out their place on the American frontier. Sam Elliot costars in the series from creator Taylor Sheridan. (Paramount+)

A death on a Trident nuclear submarine starts a police investigation that uncovers a conspiracy in the limited series “Vigil“ (TV-MA), a mystery thriller starring Suranne Jones and Rose Leslie as civilian detectives in a military culture. (Peacock)

In the mood for childhood favorites of the baby boom generation? “A Charlie Brown Christmas“ (1965), with its classic Christmas jazz score, streams on Apple TV+ and the stop motion “Santa Claus is Comin’ to Town“ (1970), featuring the voices of Fred Astaire and Mickey Rooney, is on Peacock.

BritBox presents a British tradition of “Christmas Ghost Stories” based on the short stories of MR James and others plus the new holiday short “The Mezzotint“ (2021, not rated), adapted and directed by Mark Gatiss and starring Rory Kinnear and Frances Barber. (BritBox)

“No Time to Die“ (2021, PG-13) pays tribute to the entire series James Bond series with a mission that pits Daniel Craig’s agent against a megalomaniacal villain (Rami Malek) with his own private island. The first blockbuster hit since Covid costars Léa Seydoux, Lashana Lynch, and Ana de Armas and gives Craig a dramatic exit from the franchise. Also on DVD and at Redbox.

Lily Collins is back for more continental romance in the comedy “Emily in Paris: Season 2“ (TV-MA).

International passport: a young girl recovers from the death of her mother with the help of a puppy in the family drama “Vicky and Her Mystery“ (France, 2021, TV-14, with subtitles). Also new is the superhero comedy “Minnal Murali“ (India, TV-MA, with subtitles) with Malayalam superstar Tovino Thomas.

Juliette Binoche stars in the romantic drama “Who You Think I Am“ (France, 2021, TV-MA, with subtitles) as a woman who creates a 24-year-old online identity that becomes more vivid than her real life.

The comedy special “Yearly Departed“ (2021, TV-MA) sends out 2021 with commentary by Yvonne Orji, Jane Fonda, Megan Stalter, and Chelsea Peretti (among others).

The supervillains are back in anti-hero mode in “The Suicide Squad“ (2021, R), James Gunn’s very violent, blackly comic sequel to the 2016 movie of almost the same name. Joel Kinnaman and Margot Robbie return and Idris Elba, John Cena, and Sylvester Stallone join the cast.

The documentary “Reopening Night“ (2021) follows the preparations for the first theater production from New York’s Public Theater since Covid. “Beanie Mania“ (2021, TV-PG) looks back at the Beanie Babies craze of the 1990s.

“Reno 911: The Hunt for QAnon“ (TV-14) reunites the entire cast of the comedy series for a new special.

A teenage girl joins a 19th century ship to search the Arctic for her explorer grandfather in “Long Way North“ (France, 2015, with subtitles), a gorgeous hand-painted animated feature. (Peacock and Criterion Channel)