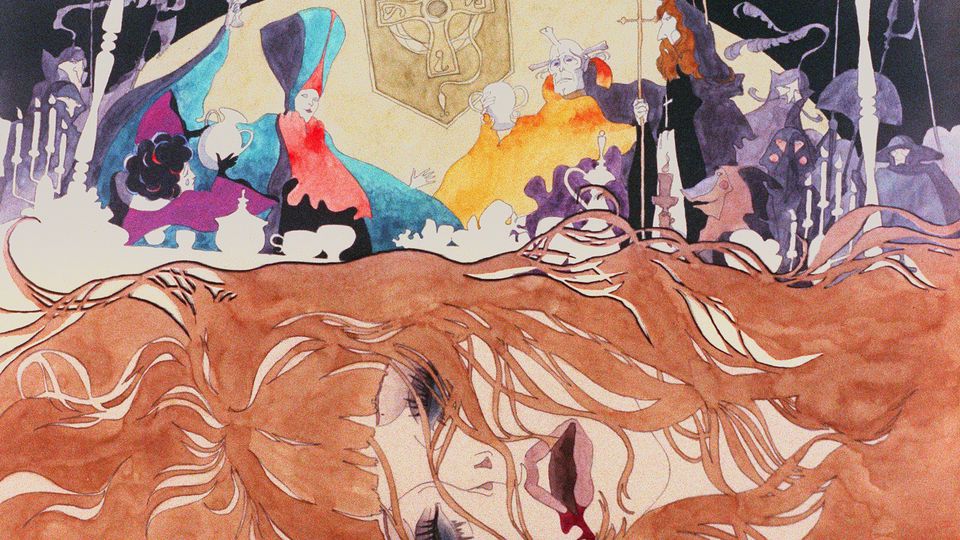 Set in an unnamed kingdom in an abstracted medieval Europe, it’s a provocative film about female sexuality in a culture where such expression is considered sinful at best and the work of the devil at worst, and sure enough the holy representative of the church stand by the oppressive ruler to maintain a proper patriarchy in the cursed kingdom. Whatever you want to call it, it’s nothing like the manga serials or sexually explicit anime horrors that comes to mind in the intersection of Japan, animation, and erotica. This has more in common with such animated outliers as Fantastic Planet (France, 1973) and the early features of Ralph Bakshi, and the Czech new wave masterpiece Valerie and Her Week of Wonders (1970).

From abstract sexual imagery to strobing Peter Max pop art designs to delicate watercolors and Euro-style sketches, this animated feature—restored to its full length and to its visual vibrancy and intensity by Cinelicious—is a unique artifact from a time when animated features could aspire to fine art and experimentation for adult audiences. You’d never guess that it’s from producer Osamu Tezuka (creator of Astro Boy and Kimba the White Lion) and director Eiichi Yamamoto, his longtime collaborator.

Not rated, features adult imagery and themes. This is for adults.

Also on Blu-ray and on SVOD through Amazon Video

, iTunes, GooglePlay and/or other services. Availability may vary by service.
Belladonna Of Sadness [Blu-ray]