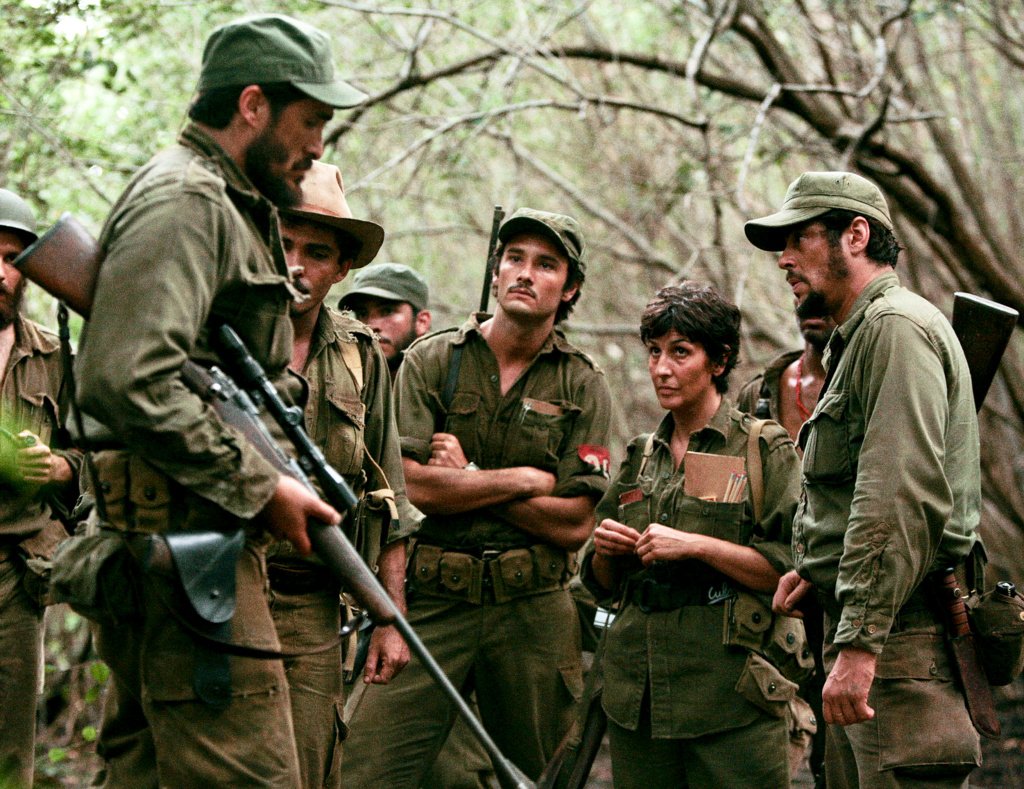 Steven Soderbergh’s two-part Che (2008), starring Benicio Del Toro as the revolutionary leader turned martyred legend and idealized cultural icon, is not a tradition bio-pic. Spanning four-and-a-half hours over two films—Part One on the triumph in Cuba, Part Two on the failure in Bolivia—it’s both two films and a single, unified work that focuses on Ernesto Che Guevara’s experience as a revolutionary soldier and guerilla leader to the exclusion of almost everything else.

Soderbergh and screenwriter Peter Buchman dispense with the usual trappings of biographical drama—the early life, the intimate revelations, the historical backdrop—and forgo psychological interpretations and motivation. And apart from his enforcement of the revolutionary code on deserters and his confrontational visit to the United Nations in 1964 (a framing sequence shot in black-and-white like a cinema verite documentary), they don’t attempt to confront his controversial actions off the battlefield. It’s all about Guevara’s education as a revolutionary and his development as a leader in the jungles and in battle.

Soderbergh photographs the films himself (under the credit Peter Andrews) in widescreen and lush color, shooting in long, deliberate takes that soak in the textures of the experience and the sense of time passing. There’s a romanticism to these guerrillas in Eden (even if they are carrying guns) that is more idealized than convincing, but the immediacy of their day-to-day lives—training, working, interacting with local farmers and dispossessed peasants—is as captivating as the battles and skirmishes. The physical world is primary, from the reality of living in the wilds (as beautiful as it is) to the political organization of the guerrilla force and the military confrontations have an authenticity and immediacy of real people under fire. It’s not documentary or even neo-realism, but removed observation. It feels more European than American, with long takes and long shots that keep the characters firmly defined by their relationships to one another and to their environment. In the first film, the image are calmly recorded and the camera movements practical. Even the battle scenes, which have that battlefield photography look of camerawork on the run and under fire, are direct and observational. But where Part One is the triumph of the Cuban Revolution and Che’s part in making it a success, Part Two is the failure of the dream in Bolivia and the desperation and the failure is felt in more jarring camerawork.

There’s a little sloganeering but not a lot of political debate, and what we see largely is Che running his part of the campaign with the idealism that brought him there: treating the locals with respect, bringing medical aid and education to them, negotiating for food rather than stealing it. He insists his men learn to read and he holds them to standard of behavior. But if he’s driven by a passion for justice and a fervent belief in the ideals of his cause, he doesn’t let it show as a person. Through it all, Soderbergh keeps an emotional distance from Guevara and Del Toro’s Che never breaks character: once he embraces the role of revolutionary leader, Guevara becomes Che, leaving his personal life behind to be the teacher, the healer, the exemplar of the revolutionary code forever setting an example. By the end he’s as much an enigma as ever, but a mortal one, a man so dedicated to his cause that everything else—including his all but unseen family—is secondary, a sacrifice to his ideals.

, iTunes, GooglePlay and/or other services. Availability may vary by service.
Che (The Criterion Collection) [Blu-ray]

On Blu-ray and DVD from Criterion, with each of the two parts on a separate disc of the two-disc set. The commentary by Jon Lee Anderson, the historical consultant to the film and the author of a Che biography, is only tangentially concerned with the film. It’s more like a historical lecture focused on the man behind the portrait and the events and details that were left out of the film. More illuminating is the 49-minute “Making Che,” an original documentary that charts the origins and long development of the project and the guerilla approach to shooting what was turned into an epic. It was also the first feature shot on the digital RED camera and the 33-minute “Che and the Digital Revolution” offers both a technical and practical portrait of the technology from the perspective of the filmmaking team. Also includes the 1967 documentary “End of the Revolution,” interviews with participants in and historians of the Cuban Revolution and Bolivian campaign, 14 deleted scenes, and a booklet.