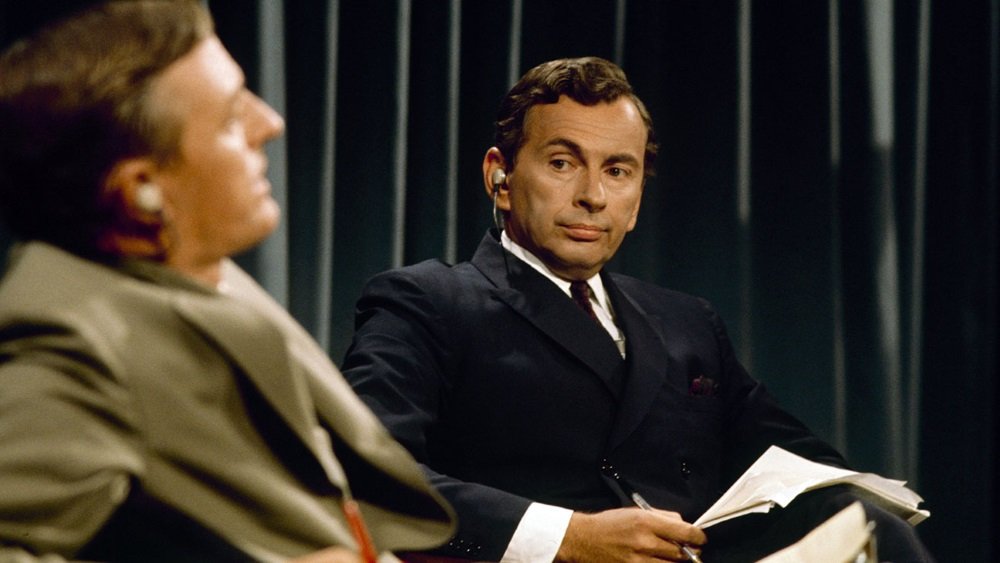 Best of Enemies (2015) carries the subtitle “Buckley vs. Vidal” and it is indeed a portrait of a rivalry, one that was presented on prime time network television at a time when there were three networks and TV news strived to be fair and balanced to a fault.

In 1968, William F. Buckley was the face of the new Conservative movement: editor of The National Review, host of the public television show Firing Line, a conservative media celebrity with a cool intellect and sharp tongue. Gore Vidal, born and raised as a member of the East Coast American political aristocracy, was a respected novelist, essayist, and outspoken liberal commentator who used his wit to provoke and satirize. They despised one another as much as they hated what the other stood for.

ABC, the distant third of three networks going into the political conventions of the election season, hired these men to debate the events of the respective Republican and Democratic conventions over ten nights of network coverage. What they got in those brief minutes at the end of each program was less debate than verbal sparring match between two erudite intellectuals attacking the political philosophy and public record of the other and they were out for blood. As Christopher Hitchens puts it, “There’s nothing feigned about their mutual animosity. They really do despise each other.”

Best of Enemies presents a contrast of two very public intellectuals along with its portrait of an unlikely and unique television event in 1968, an approach to political coverage that ultimately changed the face of political discourse on TV from reporting to punditry and competing voices. Yet there is nothing on contemporary cable news that resembles what these two men gave viewers in 1968. These men took great pride in their vocabulary, their erudition, their intellect, and they dueled with words and ideas and wicked insults in cultivated, patrician mid-Atlantic accents. This was a time when “intellectual” was not an insult but a badge of pride and these men elevated the language of discourse even while engaging in a verbal street brawl.

Directors Robert Gordon and Morgan Neville anchor their documentary with extended clips from their debates, which are unaccountably entertaining in their own right, with backstory and commentary in between. Buckley passed away in 2008, Gore Vidal in 2012, and their respective legacies are in danger of being forgotten. This documentary reminds us of their public presence and their cultural import, but what carries the film is the sheer spectacle of their verbal bloodsport on a national stage. You’ll never see this level of political discourse in the fractured world of cable TV news playing to partisan constituents and punditry reduced to sound bites and shouting matches. The personal hatred that fanned the flames of their duel only makes the spectacle that much more riveting.

Add to Amazon Prime Watchlist or stream for free on Kanopy or on Hoopla, which are available through most public and college library systems.

, iTunes, GooglePlay, Fandango, Vudu and/or other services. Availability may vary by service.
Best of Enemies [DVD]

The Blu-ray and DVD releases from Magnolia feature a seven-minute interview with the directors and over an hour of additional interviews with the featured commentators, including Andrew Sullivan, Christopher Hitchens, Dick Cavett, and James Wolcott, presented as a series of short sound bite-sized clips.