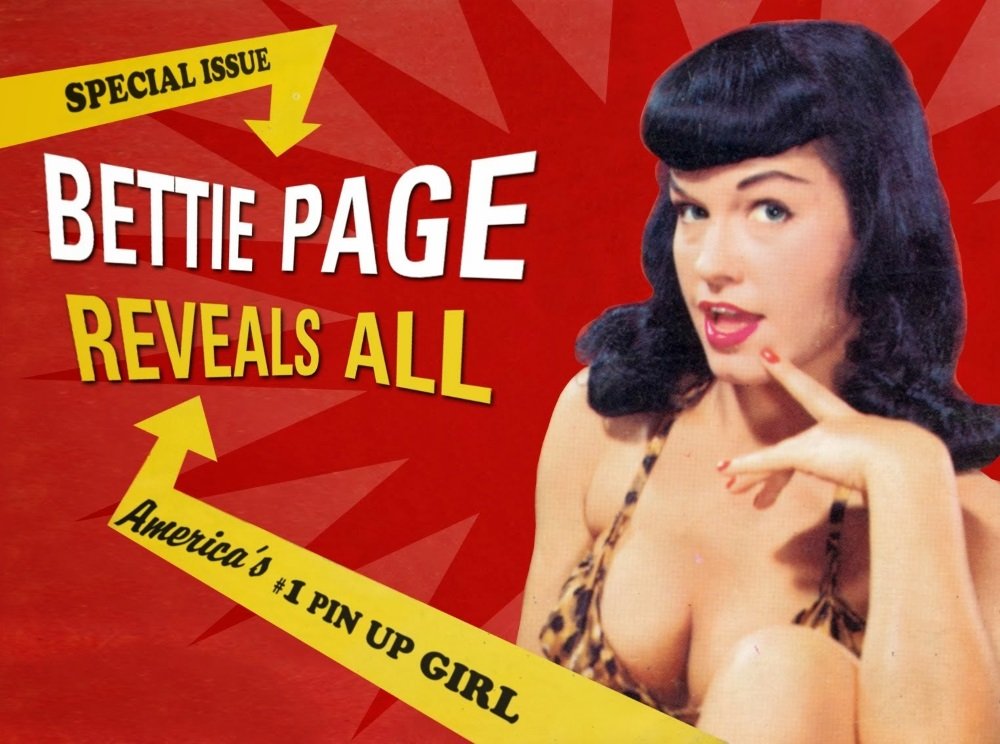 Bettie Page Reveals All (2012) doesn’t quite live up to its title, at least not when it comes to delving into the darkest days of her turbulent life.

Bettie Page was the good girl and the bad girl all wrapped up in one package, the girl next door in a bikini and bangs who managed to look innocent and sweet in hundreds of 1950s bondage photos and film shorts, and a model who made nude shots look natural and innocent. She disappeared from the public eye in 1957 but became a celebrated icon and sex symbol when her image was rediscovered in the 1980s by artists and fashion designers. The title is a harmless double entendre that refers to her career baring all in both amateur camera club sessions and professional shoots with Bunny Yeager, which landed her a spot as a Playboy Playmate, and to the film’s most interesting dimension: it is narrated by Page herself through frank and forthcoming audio interviews conducted before her death in 2008. It is audio only for she would not let herself be filmed or photographed in the last decades of her life.

Director Mark Mori clearly loves his subject and seems to be protective of her, even after her death. She fearlessly discusses the dark episodes of her life – neglected by her mother, abused by father, sexually assaulted as a young woman in New York, bad marriages, and her struggles with depression and schizophrenia that resulted in 10 years of psychiatric care in mental institution late in her life – with the same matter-of-fact openness of discussing her happy times. “I never had any bad feelings about posing in the nude or semi-nude outfits. I found I could make more money in two hours than I made all week.” Mori, meanwhile, offers a familiar mix of biographical detail, adoring commentary by experts and witnesses, and illustrative photographs (both clothed and nude) and clips of super-8 fetish and bondage shorts and 16mm cheesecake films from her career as a model.

What the portrait misses is any depth in its exploration of her life. Her first-person narration offers a great glimpse into what kind of person she was but the commentators (who include Hugh Hefner, modern burlesque artist Dita von Teese, cult actress Mamie Van Doren and fifties stripper Tempest Storm) repeat the familiar line of her charm and sweetness and impact as an icon before her time and Mori reports on her life without really exploring it, never sifting through contradictions or even acknowledging them. Page reportedly yelled “Lies!” at a screening of The Notorious Bettie Page (the 2006 feature starring Gretchen Mol as Page) but the film doesn’t take it any further: what upset her, what did she think the film get so wrong, and does Mori agree with her? If anything, Bettie Page Reveals All keeps the real Bettie Page an enigma and leaves the viewer interested in learning more about this woman who inadvertently became an icon.

This film is available to stream on Hulu without a subscription.

See it on Hulu here