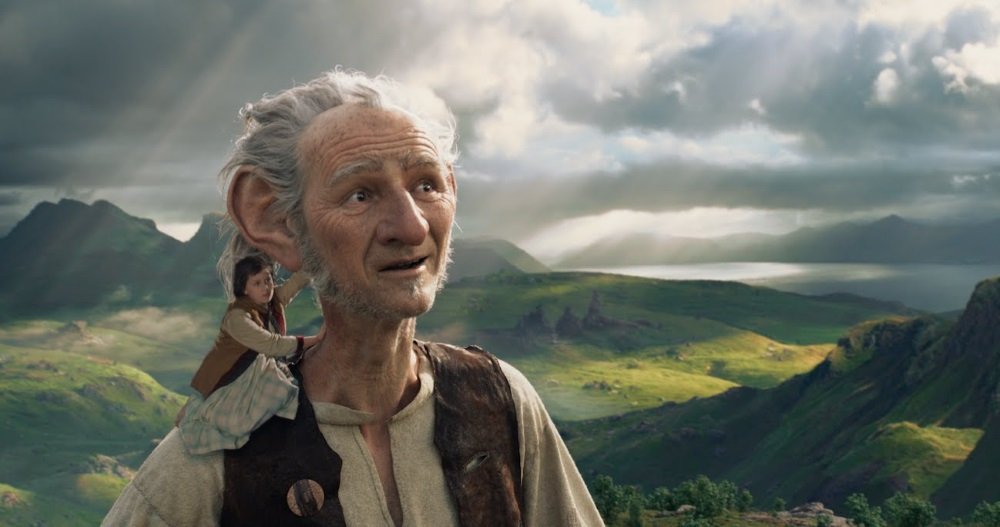 The BFG (2016) – Steven Spielberg directs this big screen version of Roald Dahl’s storybook fantasy, the tale of orphan Sophie (Ruby Barnhill) and the dreamcatching giant she names BFG (Mark Rylance), short for Big Friendly Giant. And though big to Sophie—he can carry her in the palm of his hand and set her on his shoulder, where she clings to his outsized ear—he’s a runt in Giant Country.

He’s a gentle soul, a vegetarian in a land of brutes that eat human children (don’t worry, no children were consumed in the making of this film) and a dreamer in a culture of bullies, and Sophie is determined to save him from the bigger, nastier, and downright rude giants. Her plan involves the Queen (Penelope Wilton) and BFG’s expertise as a dream mixologist, concocting just the right balance of nightmares to win friends and influence enemies.

The BFG is a small story told on a magnificent scale. It’s adapted by Melissa Mathison, who wrote E.T. for Spielberg and Kundun for Martin Scorsese. It has all the resources of a Spielberg fantasy. And Spielberg brings both sense of wonder and a playfully childish sense of humor to the adventure, from Sophie’s nocturnal wanderings in the silent orphanage to BFG hiding in plain sight as he sneaks down London city streets. The first half is pure imagination, a fantasy land off the maps where giants sleep under carpets of sod and dreams frolic like Peter Pan fairies in a mirror world under a magical lake, but he slips in giddy adolescent gags that find a rollicking innocence in things other filmmakers might simply play off as rude fun.

Rylance, who co-starred in Bridge of Spies, does the motion capture and voice for BFG and delights in the Dahl wordverse of made-up words (“whizzpopping” may just become your child’s new nickname for passing gas), mangled English, and imaginative exclamations with warmth and affection.

This is slighter than E.T. but more satisfying than Hook or The Adventures of Tintin, more playful than emotionally moving and a perfectly entertaining little fantasy from a filmmaker who can still tap into his inner child.

, iTunes, GooglePlay, and other services. Availability may vary by service.
The BFG [DVD]

The Blu-ray edition includes the 27-minute featurette “Bringing The BFG to Life” hosted by Ruby Barnhill, the six-minute “Melissa Mathison: A Tribute” to the screenwriter who passed away in 2015, and the shorter featurettes (all under five minutes) “The Big Friendly Giant and Me,” “Gobblefunk: The Wonderful Words of the BFG,” and “Giants 101,” plus bonus DVD and Ultraviolet HD copies of the film.