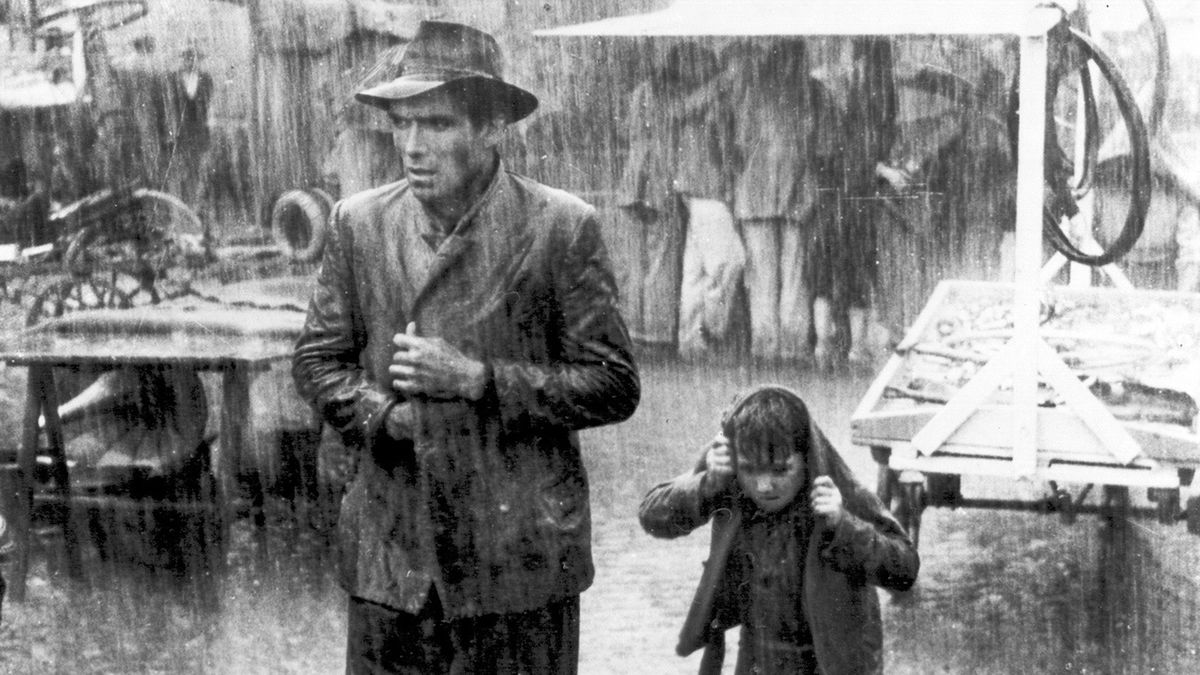 As Italy picked itself out of the rubble of World War II, filmmakers left glamor of studio comedies and romances and took to the streets, aiming their cameras at the citizens struggling to survive. Vittorio De Sica, both a matinee idol and a director of those studio distractions, was one of the filmmakers who helped shaped what became known as Italian neorealism and Bicycle Thieves (Italy, 1948) is his most famous feature.

Lamberto Maggiorani plays a man trying to support his desperate family with a new job, his first in two years. Then on the first day of work his bicycle—his sole means of transportation for work—is stolen and he searches the streets with his adoring son (Enzo Staiola) to find it.

His odyssey through the streets, alleys, and piazzas becomes a largely a symbol-laden vehicle for his portrait of depression-ridden post-war Rome. The etched-by-time face of Maggiorani, a steelworker picked by De Sica to be his everyman protagonist, projects a wounded dignity and desperation that could stand in for the country. And the conditions of the filmmaking are woven into the texture of the film. There are rough spots and the practical lighting leaves some scenes a little dark. A far cry from the glamorous imagery of those escapist confections the Mussolini loved.

In the 50 years since its release the melodrama and sentimentality haven’t aged well, but then the strength of the film has never been its plot but the sum of its snapshot-like scenes—the desolate slum-like apartments on the outskirts of town, the bustling street markets, the crowded sidewalks where pedestrians huddle during a flash storm. De Sica brings an almost documentary style to capture life in front of his lens, but infused it with an eye toward poetic realism.

The screenplay was shepherded by De Sica with neorealism godfather Cesare Zavattini and legendary screenwriter Suso Cecchi D’Amico (among others).

As a footnote, the film was known in the U.S. for years as The Bicycle Thief, a mistranslation that also obscured the dramatic journey. It has carried the more accurate and resonant title since the early 2000s.

It won an Honorary Academy Award (in the days before the Foreign Language Oscar) and was voted the greatest film ever made in the inaugural Sight & Sound poll in 1952. It placed in the number 41 spot in the 2022 Sight & Sound Greatest Films of All Time poll.

In Italian with English subtitles, in black and white.