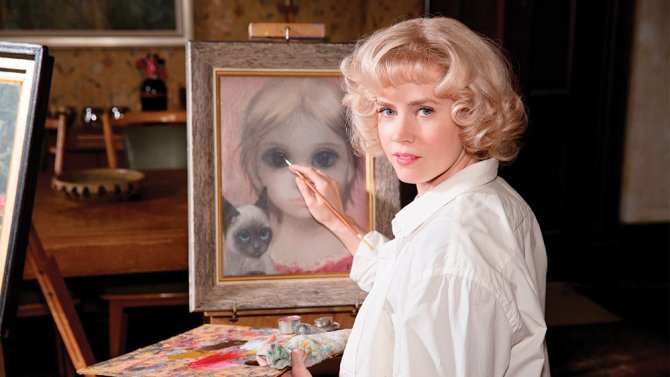 Big Eyes (2014) is Tim Burton’s second foray into strange but true stories of American termite art culture. Where Ed Wood was a valentine to artistic oddballs and eccentrics on the fringes told with an optimism that was certainly not mirrored in Wood’s real life, this is a story about the pain behind the façade of happiness and success.

Amy Adams is Margaret Keane, who painted thousands of portraits of sad-eyed waifs, and Christoph Waltz is Walter Keane, the born salesman who promoted her paintings into a pop culture phenomenon in the sixties and seventies while taking credit for painting them. Waltz plays the part like he’s perpetually on the hustle and Adams’ Margaret falls not so much for his charm as for his confidence, a dimension that becomes demanding, bullying, and threatening as he basks in the success of her work.

Burton and screenwriters Scott Alexander and Larry Karaszewski (who also wrote Ed Wood and The People vs. Larry Flynt) empathize with Margaret and her ordeal and Adams gives a nuanced performance as Margaret, a single mother who escapes one bad marriage for another even worse, too timid to challenge the dominating Walter until she finds herself. For Walter it’s about money and attention and the adoration of fans (even if the art establishment finds the paintings commercial abominations). For Margaret, it’s a matter of honesty and identity. The paintings reflected her soul, not his.

Burton is also fascinated with the way her art was dismissed as kitsch while it was embraced by the public: Are the Keane big eyes paintings art, kitsch, both, or something else? The cross section of art and commerce is fascinating but not all that well explored. And while his instinct for visual excess is largely in check, he can’t help but give so many scenes over to Waltz’s exuberant hustle. The film works thanks to Burton’s affection for both the art and the artist, Adams’ resilient performance, and a story that is too fascinating to be fiction.

Also on Blu-ray and DVD and on SVOD through Amazon Video, iTunes, GooglePlay, Vudu and/or other services. Availability may vary by service.
Big Eyes [DVD]

The Blu-ray and DVD include the featurette “The Making of Big Eyes.” The Blu-ray also features highlights from screening Q&As with director Tim Burton, actors Amy Adams, Christoph Waltz, Krysten Ritter, and Jason Schwartzman, screenwriters Scott Alexander and Larry Karaszewski, and the real-life Margaret Keane, and an UltraViolet Digital HD copy of the film.

Pingback: Stream On Demand|What to watch the week of Friday, April 17
Comments are closed.