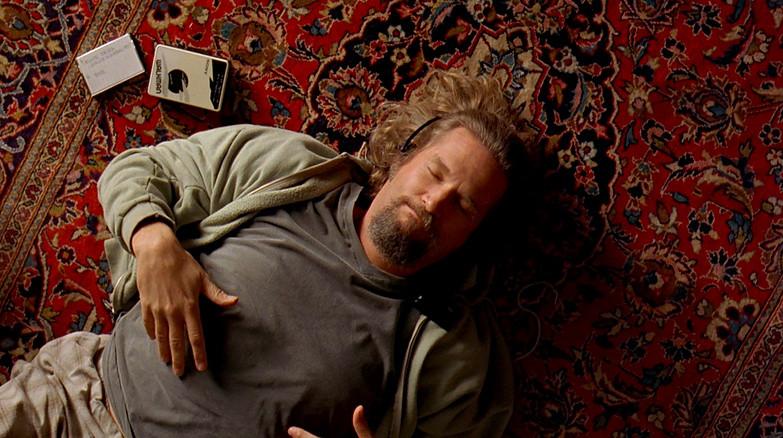 Rolling Stone once called The Big Lebowski (1998) “the most worshipped comedy of its generation.” I like to think of it as the Book of Duderonomy, the lost gospel of the post-modern Testament.

Jeff Bridges is brilliant as the Dude, one of the most strangely centered individuals in the movies. This bowler/stoner/free spirit is mistaken for a millionaire (David Huddleston) by a band of German punk nihilists, and John Goodman is his Vietnam Vet bowling buddy, who sinks him deeper into trouble with one testosterone-and-righteous-indignation-fueled scheme after another. Think of it as a slacker The Big Sleep, a shaggy dog parody of classic L.A. detective stories where the passive hero is threatened, confronted, assaulted, seduced, drugged, and so completely bummed out that he’s forced to solve a mystery so everyone will just leave him alone to enjoy his dope and his Dylan.

The Coens concoct an absurdist Chandler-esque mystery, drop in a couple hilarious dream fantasies (including a bowling dream sequence by way of Busby Berkley, complete with credits), and even bring in a drawling Sam Elliot to narrate this tall tale like a western myth. Julianne Moore co-stars as an avant-garde artist turned Valkyrie fantasy, and Steve Buscemi, Peter Stormare, Philip Seymour Hoffman, and Ben Gazzara co-star.

It’s not the most successful, famous, or critically acclaimed film by the Coen Bros., but it surely has the most dedicated fan base, complete with an annual Lebowskifest. It’s like, you know, pretty groovy, man.

And even cooler, it was added to the National Film Registry in 2014.

Leaves Peacock at the end of December. Add to My Stuff on Peacock

, iTunes, GooglePlay and/or other services. Availability may vary by service.
The Big Lebowski [Blu-ray]

The Blu-ray and DVD editions both include the 28-minute “The Making of The Big Lebowski” features interviews with the Coen Brothers, Bridges, Goodman and other members of the cast, Jeff Bridges’ photos from the set, and an introduction to the film by “Mortimer Young” (practitioner of “non-uptight” film preservation).

The Blu-ray also offers “The Dude’s Life” and “The Dude Abides: The Big Lebowski Ten Years Later,” a match set of retrospective featurettes with most of the major cast members (but not the Coens) looking back at the film and their part in the production, and it’s both smoother and livelier than the “Making of” production. There’s also a short portrait of the annual Lebowski Festival, a short piece on the film’s dream sequences, the interactive trivia game “What’s My Line” (to be played while watching the film: it freezes and you have to guess the next line) and a couple of other interactive modes. “Scene Companion” offers pop-up quotes and actor bios (read aloud by an anonymous narrator), “Mark It, Dude” is a running counter for Lebowski-isms and other references, and “The Music of The Big Lebowski” accesses pop-up info on the songs of the film. There’s also an interactive map and other supplements