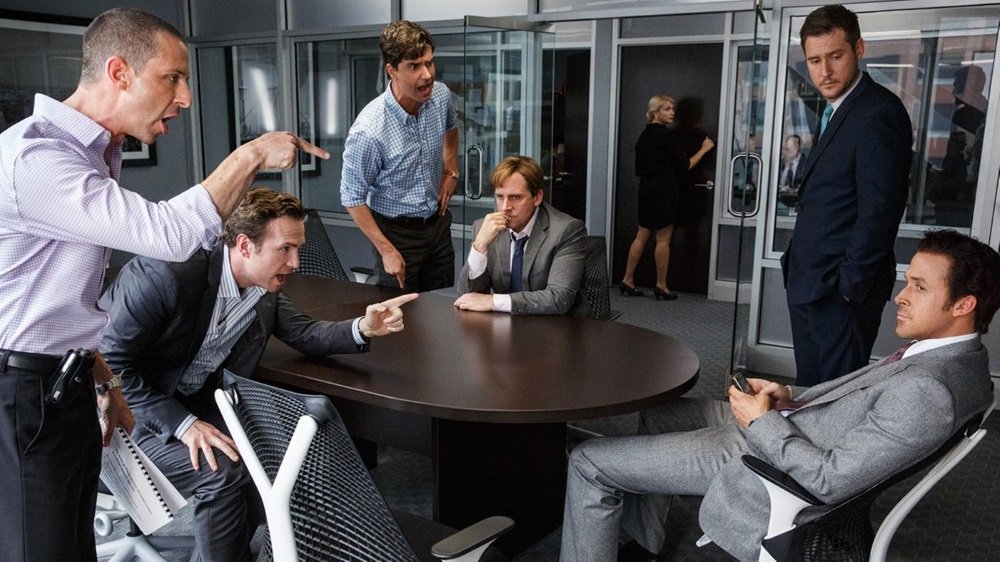 The Big Short entered Oscar season with great reviews and five Academy Award nominations. It came away with a single win, for Best Adapted Screenplay for Charles Randolph and filmmaker Adam McKay. That’s pretty good for a director, previously known for guiding Will Ferrell through such comedies as Anchorman, Talladega Nights, and The Other Guys, tackling nothing less than Michael Lewis’ nonfiction book on the reasons behind the financial collapse.

The Big Short is serious and angry. It’s also very funny, which is its secret weapon. What’s a subprime mortgage? Here’s Margot Robbie in a bubble bath to explain it to you. Need to explain what a CBO is without driving audiences away? How about Selena Gomez at a casino?

In the hands of McKay and his co-conspirators, the financial fraud of the 2000s is nothing short of a criminal farce with dire consequences. For us, that is, not the folks who perpetrated the crisis out of greed, criminal neglect, and reckless abandon. In this company of thieves and accomplices, the heroes of this story are a few men who saw through the façade and proceeded to bet against the house. They are, of course, outliers with idiosyncrasies.

Christian Bale is Dr. Michael Burry, a genius on the autism spectrum who doesn’t get sarcasm and fights anxiety with death metal. Steve Carell is Mark Baum, the outraged, angry head of a small investment team whose social skills are only slightly better than Burry’s. Brad Pitt is Ben Rickert, a disillusioned trader intrigued by the findings of two young guys (Finn Wittrock and John Magaro) with a private investment fund. These guys, independently of one another, figured out that the so-called Triple AAA mortgage bonds were built on a foundation of ready to collapse at the first tremor of panic.

Ryan Gosling is the junior Gordon Gekko who narrates the story and provides color commentary with a cynical wit. A slick suit with a feral bloodlust for money, he’s not like these outsiders who, to some degree or another, are appalled at the degree of corruption and lack of accountability they discover in their respective campaigns of due diligence. He’s just a man who smells profit and signs up for his share, but it also makes him an effective master of ceremonies. He’s got no illusions to be shattered, which makes his incredulity all the more effective.

Let’s be clear: the characters of The Big Short are constructs with no dimension beyond their surface quirks and McKay, who has the chops for ensemble comedy and visual humor, hasn’t any idea how to stage or shoot a dramatic scene. This isn’t a film so much as an illustrated screenplay sustained by screen personalities and directorial momentum.

Given that, The Big Short is the film that we needed at this time. Its star power alone brings in folks who wouldn’t think of watching a documentary, and the jumpy pace and steady laughs are just the thing to pull viewers through the arcane details of the investment business to understand how it fell apart. At least in its broad strokes. You may not remember all the economic details once the film is over but you should come away with a sense of outrage, a checklist of those responsible, and a realization that the marketplace is not some pure self-correcting financial ecosystem but a free-for-all built on greed, faith, blind obedience, ignorance, and a disturbing lack of accountability. That the film has you laughing instead of crying is bonus.

Also on Blu-ray, DVD, and Digital HD. The Blu-ray edition includes five featurettes and bonus copies of the film on DVD and Ultraviolet Digital HD.
The Big Short [DVD]

Pingback: What to watch the week of Friday, July 8 - Stream On Demand
Comments are closed.