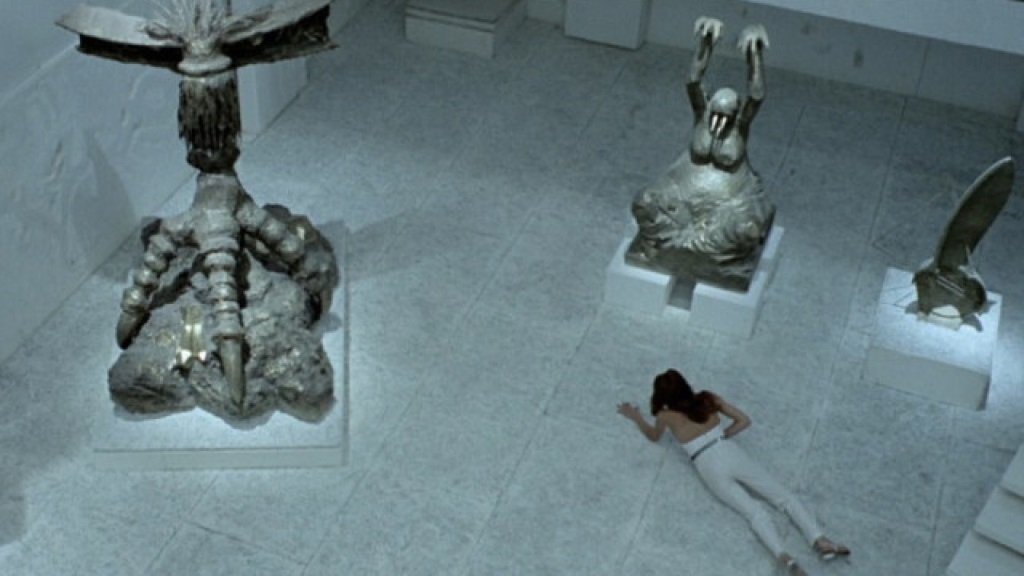 Dario Argento takes sole writing credit for his directorial debut but The Bird with the Crystal Plumage (Italy, 1970) is actually an unofficial adaptation of Fredric Brown’s novel The Screaming Mimi (previously made into a 1958 film) that Argento developed with popular mystery novelist Bryan Edgar Wallace. Wallace wrote a number of gruesome murder mysteries that became the basis for a sadistically violent genre of thrillers known as “krimi.” The Italian giallo has a lot in common with the krimi, which usually had masked or otherwise mysterious killers stalking and killing the cast in a gruesome manner. The giallo ups the ante by turning the murders into gory spectacles and the mystery into a series of stylish and strange set pieces.

Sam Dalmas (Tony Musante), an American novelist in Italy, becomes a helpless spectator to a vicious attack in an art gallery. Initially a suspect, Sam becomes the key witness to the attempted murder, the fourth in a month but the first victim to survive. But something about the attack haunts him and he launches his own investigation as the murders continue and the killer finally turns on Sam. The mystery ultimately collapses into bizarre and silly twists, but the story is only a structure for Argento to spin his painstakingly choreographed visions.

Argento exhibits a sure hand in his first film, creating an easy to follow thriller spiced with tightly choreographed murder scenes and leavened with character humor (his colorful cast includes a genial stuttering pimp and an eccentric artist who lives in a house with no doors). But it’s his gift for arresting images and cinematic inventiveness that gives this thriller its edge, from the opening murder where Sam impotently watches the bleeding victim (Eva Renzi) while trapped in a veritable glass cage to the killer’s naked eye peering through a peephole at Sam’s girlfriend Julie (Suzy Kendall) as she hysterically searches for an escape from the killer’s pounding attempts to break into her apartment. These are his first set pieces of violence and terror painted with an elegantly fluid camera and carefully controlled colors.

Future Oscar winner Vittorio Storaro shot the film—it was his first color film and he makes it a showpiece—and Ennio Morricone provides an unusual, often eerie score arranged for human voices. While less baroque than his later work—they are in some ways a rough draft for the delirious “giallo” to come—it is a fine first film and a standout in the giallo genre.

Leaves Criterion Channel at the end of September. Add to My List

Also on Blu-ray and DVD and on SVOD through Amazon Video, iTunes, GooglePlay, Fandango, Vudu and/or other services. Availability may vary by service.
The Bird With The Crystal Plumage (2-Disc Limited Edition) [Blu-ray + DVD]

Blue Underground released it on Blu-ray in the U.S. years before in a special edition. Arrow’s new Limited Edition Blu-ray+DVD release is mastered from a new 4K restoration from the original camera negative (it looks superb) and features both original mono Italian and English language soundtracks with optional English subtitles and a completely new collection of supplements. Giallo expert Troy Howarth provides commentary, there are new interviews with filmmaker Dario Argento (about 28 minutes) and actor Gildo Di Marco (who plays Garullo the pimp), a new visual essay on the cinema of Dario Argento by Alexandra Heller-Nicholas, and an analysis of the film by critic Kat Ellinger. The initial releases include a 60-page booklet and bonus collectibles. Argento obsessives may be tempted to keep both the Blue Underground and Arrow Video editions for the extras as there is no overlap at all.