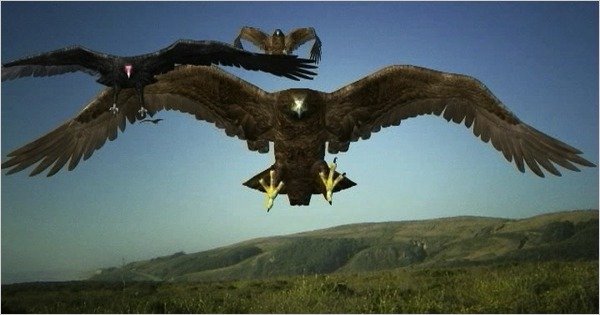 When director James Nguyen toured with his absurdly inept no-budget horror film to Britain, it was introduced to the audience as “A genuine American phenomenon.” I don’t know if I should take pride or feel insulted by the description. Birdemic: Shock and Terror (2011) is indeed a phenomenon, a midnight movie with a devoted following of fans who just love the awkward acting, the stilted script, the absurd not-at-all-special effects and the sheer amateurishness of the filmmaking. Which makes it great with an audience and painful to watch alone.

A shot-on-video reworking of The Birds as a screwy commentary on the dangers of global warming, Birdemic: Shock and Terror pours every stupid horror movie cliché into an abstract road movie about a charisma-challenged salesman (Alan Bagh) and a pretty fashion model (Whitney Moore, whose potential acting talents are sabotaged by Nguyen’s lazy editing) trying to escape an invasion of exploding eagles and vultures: birds of prey as self-guided missiles on a collision course with mankind. Actually it takes what seems like hours of mind-numbingly banal dialogue and a PG-rated love scene (which is supposed to be sexy and just embarrasses all concerned) before the birds attack, and then what we get are flapping video game icons hovering over the picture and then spontaneously combusting. The CGI effects make the SyFy Channel original monsters look like state of the art masterpieces, but they are downright sophisticated compared to his technical values. The soundtrack is a symphony of hiss that rises and falls through the film and the sluggish editing halts any momentum that threatens to develop. But give him props for the most inspired use of wire hangers since Mommy Dearest.

Our lovey-dovey duo hits the road with a couple that just happens to be packing a machine gun (now we know just why we need to legalize automatic weapons for all!), meet an ornithologist and an eco-warrior who offer speechifying explanations for the disaster, and get gouged for gasoline because of the enormous demand, which is strange since the road out of town is practically deserted. But then logic doesn’t really enter into this film. At a Q&A screening, when asked by the birds explode, Nguyen explains: “Global warming has made eagles and vultures toxic.”

While there is a lot of love for this film, it’s not about the film per se as it is the interactive experience. This is a film that needs to be seen in a group so if you are considering firing up the home theater for this, make sure you have plenty of rowdy friends and the intoxicants of your choice to complete the experience. Don’t forget the hangers for waving away pesky birds and remember: No open flames. You never know when one of these babies is gonna blow.

Also on DVD and Blu-ray with supplements (details below, under the trailer) and on SVOD through Amazon Video

, iTunes, GooglePlay and/or other services. Availability may vary by service.
Birdemic: Shock and Terror [Blu-ray]

You can hear Nguyen at Q&As in the “Birdemic Experience Tour,” the most fun of the supplements on Severin’s DVD and Blu-ray release of the film. There are also two commentary tracks (one by director Nguyen, the other by stars Alan Bagh and Whitney Moore), two deleted scenes (what does it take to get cut out of this film?) and Nguyen’s appearance on a cable access program called “Close Up,” which has only slightly higher production values than his film. Where most directors would use the opportunity of digital mastering for home video to smooth over technical glitches, this preserves all the awkwardness of the acting, editing, sound and timing, almost as if it were all a put-on of incompetence. Apparently not. Nguyen is not above playing along with the unexpected embrace of his failings but he really does want to be taken seriously. Ain’t gonna happen, James. Just sayin.