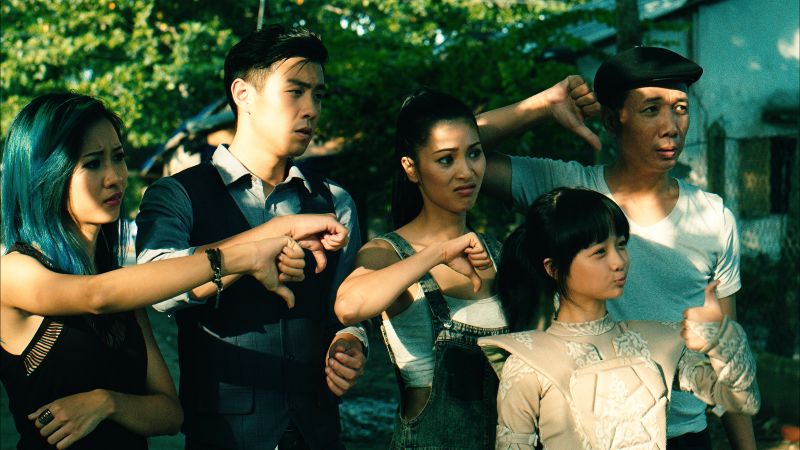 Bitcoin Heist (Vietnam, 2016) is a conundrum of a title. After all, Bitcoin is a virtual currency and a heist suggests, well, something a little more physical than computer hacking. That’s part of the fun of this colorful and zippy Vietnamese action film: old-fashioned heist thriller meets the high-tech world of cybercrime, a production modeled on the action aesthetics of modern Korean cinema and the goofy humor of Hong Kong action comedy. Smart? Not necessarily, but it’s more fun than many of the sober Korean crime thrillers and narratively sloppy Chinese action films I’ve seen in the past couple of years, if only for its headlong momentum and amiable personality.

The plot involves the efforts of Special Agent Dada (Kate Nhung) with the cybercrimes division to catch an international money launderer known as Ghost. The sting operation goes wrong when their snitch panics, the accountant (Thanh Pham) with the digital key flees, and the Bitcoin fortune is stolen by a hacker. So Dada goes rogue, pulls the accountant out of prison, and puts together a team of petty but lovable criminals to break into a high-security fortress to access the protected Bitcoin vault. There’s a former pickpocket who now works as a nightclub magician and just happens to be her former lover, an aging forger, a teenage cat burglar, and a hacker out for revenge, and they all share their troubled pasts and regrets as they bond on the mission. It is clearly indebted to Oceans 11 (and sequels) and Now You See Me (the magician and his sleight of hand talents become a central part of the plot), and is frankly no less ridiculous than that latter.

Bitcoin Heist is the first Vietnamese film I’ve seen in the slick action spectacle milieu so I have no idea if it’s unique or part of a larger genre but it’s awfully entertaining in its way. It’s full of clichés yet the change in culture and shift in sensibility make it, if not quite refreshed, at least a little different, and it’s steeped in the sentimentality and melodrama and cartoonish comedy common to Asian action cinema. But director Ham Tran fills it with rapid-fire editing, splashy graphics and digital effects, jaunty music, and plenty of colorful (and corny) comedy and romance, and the reliance on familiar conventions works to its benefit when a clever twist that sends the third act into a new direction involving double crosses and an elaborate confidence game. It’s a convention in its own right, but the art of misdirection works in the film’s favor. Before you know it, you get caught up in the whole ridiculous endeavor.

Not rated, Vietnamese with English subtitles

The DVD+Blu-ray Combo from Well Go has no supplements.