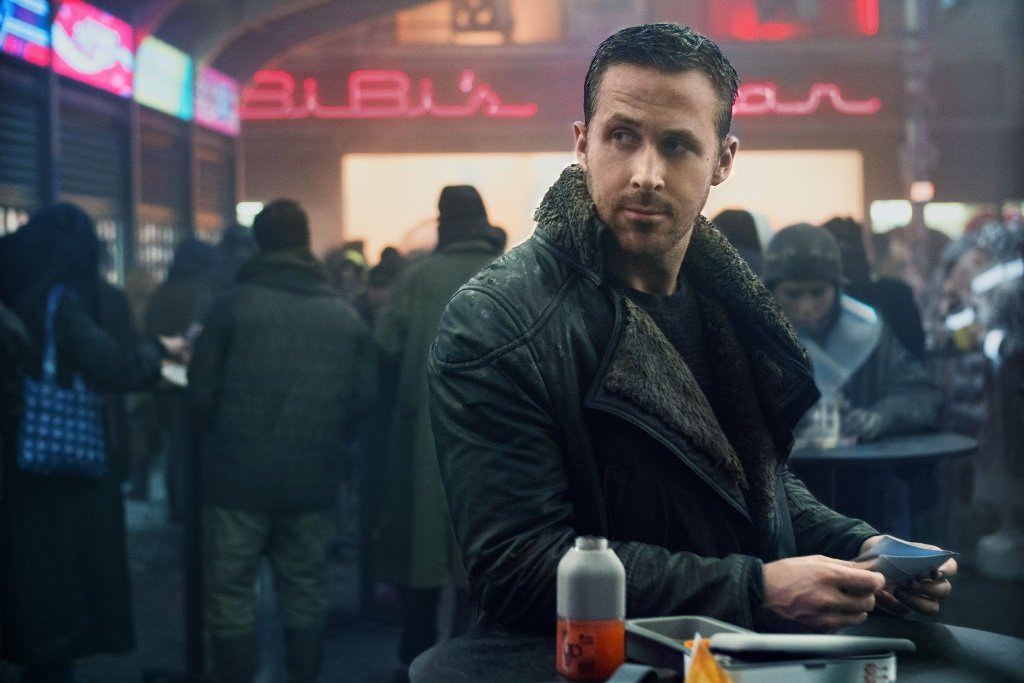 35 years after the original Blade Runner changed the landscape of big screen science fiction, Blade Runner 2049 (2017) dared build on the dystopian portrait of the ecologically devastated urban night imagined on screen by director Ridley Scott and his team of designers and artists. Just as in the original, this film is as much about the texture of the world on screen as it is the story of the Replicants (artificially manufactured humans created as slave labor) 30 years after Deckard first strolled the mean streets of L.A.

Ryan Gosling is K, the Blade Runner of this story, a next generation Replicant whose job it is to “retire” the last of the old models, the ones created with a more flexible will that led to rebellion. His new assignment unearths artifacts that leads directly back to the story of Deckard (Harrison Ford) and Rachel (Sean Young) and the legend of a Replicant child, a messiah myth for the Replicant underclass not unlike the Christian virgin birth: the first non-virgin birth of a race genetically designed in a lab. It’s a story that Niander Wallace (Jared Leto), the techno-industrialist who took over the collapsed Tyrell Corporation, will do anything to bury and he sends his own Replicant enforcer, Luv (Dutch actress Sylvia Hoeks), to eradicate the evidence.

This is science fiction spectacle and futuristic detective story as art movie tone poem, a conspiracy thriller with flying cars, blaster handguns, and big brawling fights that defies the breathless pace of the action genre. Blade Runner 2049 takes its time (it runs over two and a half hours) to settle into the texture of the alien landscape of this ecologically-collapsed world and appreciate the moments of connection between characters who aren’t supposed to be capable of love. Scott serves as producer this time around and Hampton Fancher, who adapted and reworked the Philip K. Dick novel, scripts once again (though without the input of co-screenwriter David Peoples, whose rewrites helped give the original its poetry), but this world is very much the creation of director Denis Villeneuve (Arrival and Sicario) and cinematographer Roger Deakins.

Built on the technology and sociology and urban sprawl of the original film (complete with eighties video game graphics and green-hued text readouts), it embraces an alternate reality future and puts the experience of inhabiting and exploring this world over the momentum of plot. And there’s plenty of world to explore as K travels beyond the city to the protein farms and technology dumps outside the L.A. sprawl and the sand-blasted ghost town of Las Vegas that look could be the ruins of an ancient empire destroyed by its own decadence.

It gives Blade Runner 2049 a lonelier, more isolated quality than the urban crush of the original. Deckard was a loner in a crowd. K is just alone but for an AI lover, Joi (Ana de Armas), a holographic projection he can never touch. Are they in love or just responding to programming? Does it matter? Many of the same questions posed in the original film recur here. Is a Replicant human? Does it have a soul? Does it feel or desire? I have one of my own: why do Replicants cry when they kill? Is it part of the programming, or in their yearning for autonomous life do they regret every life they take while carrying out the tasks assigned by their human bosses?

The questions aren’t answered, but it’s enough that they are there waiting to asked. Blade Runner 2049 is a mystery and a sensory experience that moves at a contemplative pace to give viewers the opportunity to take in the journey, soak in the textures and colors of Deakin’s cinematography, and settle in to the languid pace of Villeneuve’s direction. It’s not the kind of experience you expect from a big-budget Hollywood film and for that I am delighted. Even if it ultimately flopped at the box office. Just like the original.

, iTunes, GooglePlay and/or other services. Availability may vary by service.
Blade Runner 2049 [Blu-ray]

On DVD and Blu-ray from Warner Bros. Home Entertainment. Nothing in 2017 looked this film and it has been beautifully mastered for home video. This is a film that singularly benefits from the best possible presentation.

All editions include the featurettes “Designing the World of Blade Runner” (21:55) and “To Be Human: Casting Blade Runner 2049” (10:15), a “Blade Runner 101″ collection of very brief featurettes (11 minutes in all), and three “Prologues” that imagine events between the two Blade Runners. The longest, 2022: Black Out (15:45), is an animated short in the anime style that dramatizes the anti-Replicant riots from Cowboy Bebop director Shinichiro Watanabe, the other two (featuring Jared Leto as Niander Wallace and Dave Bautista as Sapper Morton respectively, are directed by Luke Scott, producer Ridley’s son.