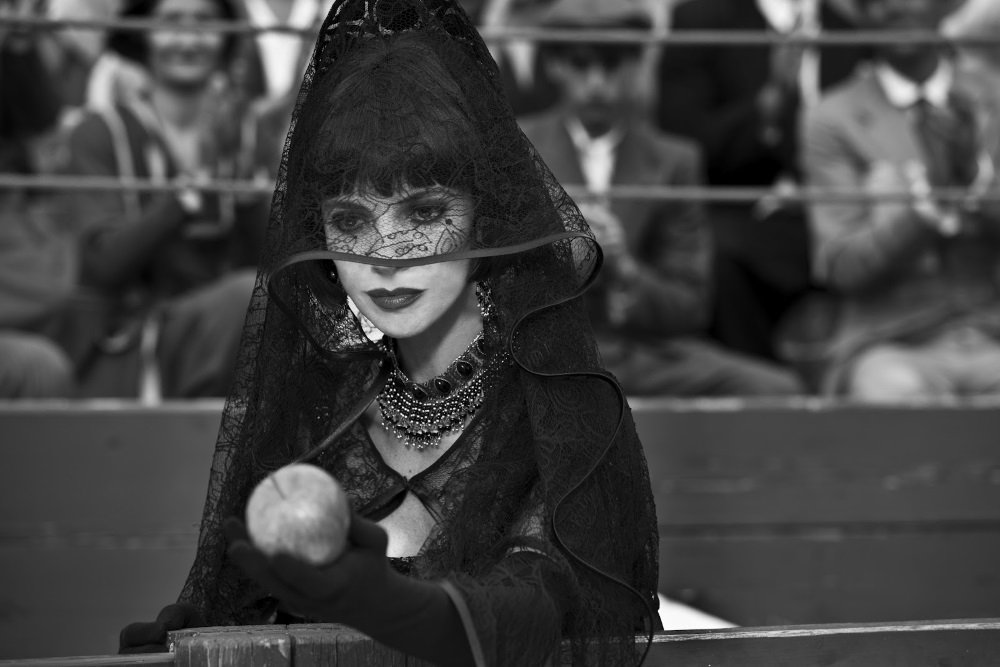 Blancanieves (2009), an inventive retelling of Snow White as a silent-movie melodrama in the 1920s world of bullfighting royalty and flamenco style in Spain, stirs in grand melodrama, circus fantasy, and toreador hero worship with a mix of silent film conventions and contemporary storytelling.

We’re talking the same sort of modern silent film as The Artist, but more stylized, with nods to Valentino’s Blood and Sand by way of Victor Sjostrom and Pedro Almodovar, and a twist of modern heroine empowerment.

The Snow White of this film is Carmen (Inma Cuesta), the all-but-abandoned daughter of a crippled bullfighter (Daniel Giménez Cacho). Maribel Verdú (the older woman of Y Tu Mamá También) plays the role of the scheming nurse turned social-climbing wicked stepmother Encarna with a sadistic glee. There’s also a band of dwarfs with a gypsy bullfighting act and a poisoned apple, but the classic elements end there. The corrida becomes the realm of magic here as the amnesia-struck Carmen becomes a matador in her own right, adored heroine and Prince Charming all at once.

Director Pablo Berger plays the melodrama big and Verdú vamps it for all she’s worth. Venom drips from Encarna’s smiles and her eyes burn with excitement as she turns the adorable, eternally optimistic Carmen into a scullery maid and her chauffeur-turned-lover into her obedient dog. Complete with leash. More powerful than the wickedness of Encarna, however, is the predatory grip of a dodgy agent with an exclusive contract.

No one is going to mistake this self-aware silent film for a classic movie, but his creative energy and inventive more than justifies the appropriation of the style. It’s gorgeous and clever and, by the end, even tragic.

Rated PG-13, in black and white, silent with musical score