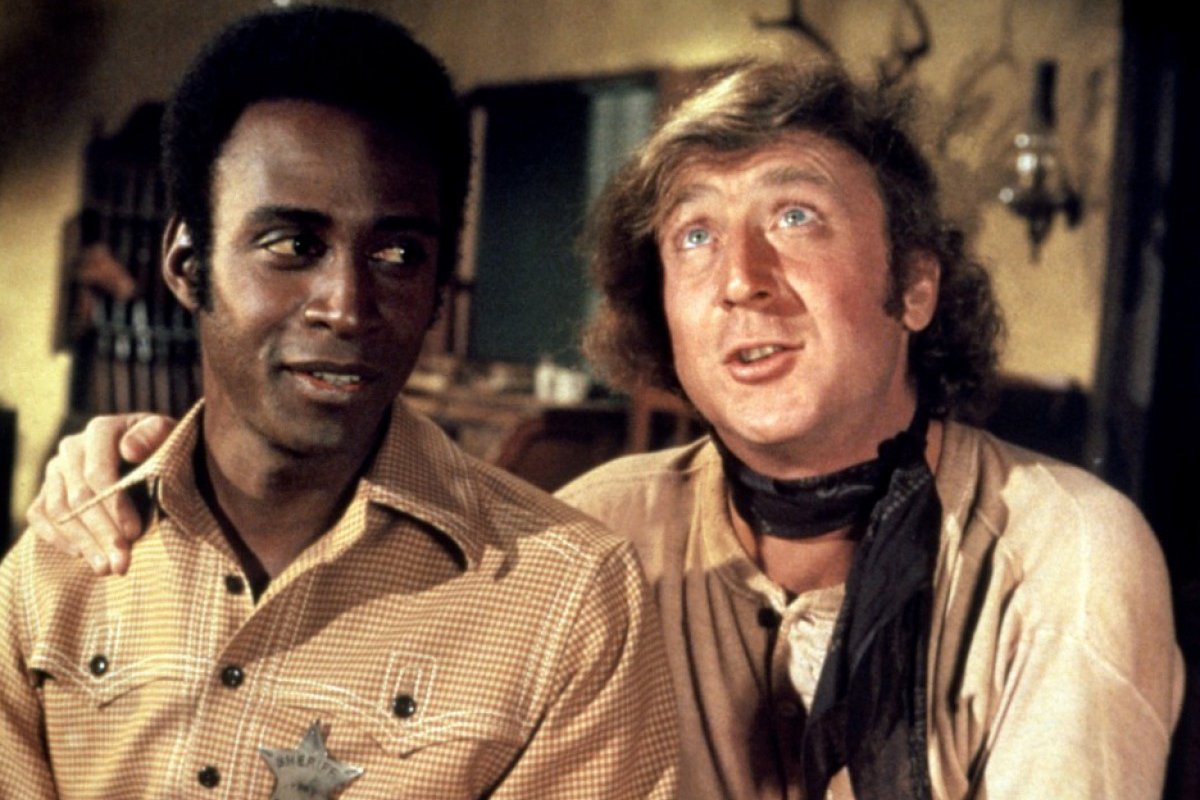 When singer Frankie Laine was interviewed by Terry Gross on NPR’s Fresh Air many years ago, he confessed that when he was engaged to record the theme song to Mel Brooks’ Blazing Saddles (1974), he was not told that the film (and the song) was a spoof. He simply thought it was a bad song that he gave lines like “He rode a blazing saddle” a gravity that defies the painful lyric. Which was what Brooks wanted all along. That knowing touch sets the stage for a film that never met a cowboy convention it didn’t lovingly skewer.

More than simply a loving spoof of Hollywood westerns, Blazing Saddles is one of the funniest movies ever made (it was in fact voted the sixth funniest movie of all time in an AFI poll) and one of the most audacious satires of racism to come out of Hollywood. It stirs cowboy movie tropes up with racial humor, satirical lampooning, cartoon slapstick, and bathroom humor. Especially farts. Lots of farts. Cleavon Little stars as Bart, a quick-witted railway worker saved from the gallows by corrupt governor’s aide Hedy (“That’s Hedley!”) Lamar (Harvey Korman) only to be made sheriff of a lily-white frontier town under siege from the Governor’s own gangsters. It tackles bigotry and racism by ridiculing it,

Mel Brooks came to Blazing Saddles on the success of The Producers, a film that also flirted with bad taste close to edge of offensiveness, but for this spoof he charged over the line with a brilliant staff of co-writers, including Andrew Bergman (The In-Laws), Norman Steinberg (My Favorite Year), and groundbreaking comedian Richard Pryor (who was originally cast in the lead by Brooks but nixed by the studio, apparently nervous over the comedian’s reputation). They turn the tropes upside down—the heroic cowboy loner that rides into the lawless town is set up for a sure lynching, which he outsmarts in the most surreal hostage situation ever concocted—and fill in a century or so of pop culture between the 19th century frontier and the contemporary sensibilities of its urban dude in the saddle, Black Bart (Cleavon Little), who croons Cole Porter and rides the plains in Gucci gear to a swinging Count Basie beat.

Madeline Kahn is a scream as a lisping Marlene Dietrich-like cabaret entertainer (she earned an Oscar nomination for her performance) and Gene Wilder provides amiable support and crack timing as the alcoholic ex-gunfighter who joins our stalwart hero. Brooks himself co-stars as the Governor and as a kvetching Indian chief in a brief flashback and Frankie Lane indeed sings the brilliant theme song without a trace of camp (it also received an Oscar nomination).

The sheer energy and anything-goes inventiveness of the film—quick costume changes, exploding candy boxes and a hulking brute named Mongo (Alex Karras)—suggests at times a live action Tex Avery cartoon. And don’t forget a round of flatulence humor right out of an adolescent boy’s campfire giggling fit. It was comic gold and a smash hit for Brooks, who snuck raucous satire of racism under the anything-goes spoofing and wasn’t coy when it came to taking on bigotry. Audiences clearly got it: Blazing Saddles was the comedy hit of 1974 and remains the gold standard for the western comedy.

It also earned an Academy Award nomination for the screenplay and was added to the National Film Registry in 2006.

Watch it. You’d do it for Randolph Scott!

Leaves Hulu at the end of August. Add to My Stuff on Hulu

The Blu-ray and DVD special editions feature scene-specific commentary by director Mel Brooks, the 28-minute documentary “Back in the Saddle” (with new interviews with Brooks, Gene Wilder, Harvey Korman, writer Andrew Bergman and others, and plenty of clips from the alternate TV version), 1975 TV pilot Black Bart, inspired by the film and starring Lou Gossett Jr. and Steve Landesberg, ten minutes of deleted and alternate scenes (including the full versions of clips seen in the documentary), and the trailer.

The 40th Anniversary Blu-ray edition includes the half-hour featurette “Blaze of Glory: Mel Brooks’ Wild, Wild West,” built around a new interview the Brooks and featuring archival interview clips with Gene Wilder and Madeline Kahn, and a collection of postcard-sized stills with comic-strip bubble lines from the film.

Pingback: What to stream: 'The Rise of Skywalker' on VOD, 'Tales from the Loop' on Amazon, 'Onward' on Disney+ - Stream On Demand
Comments are closed.