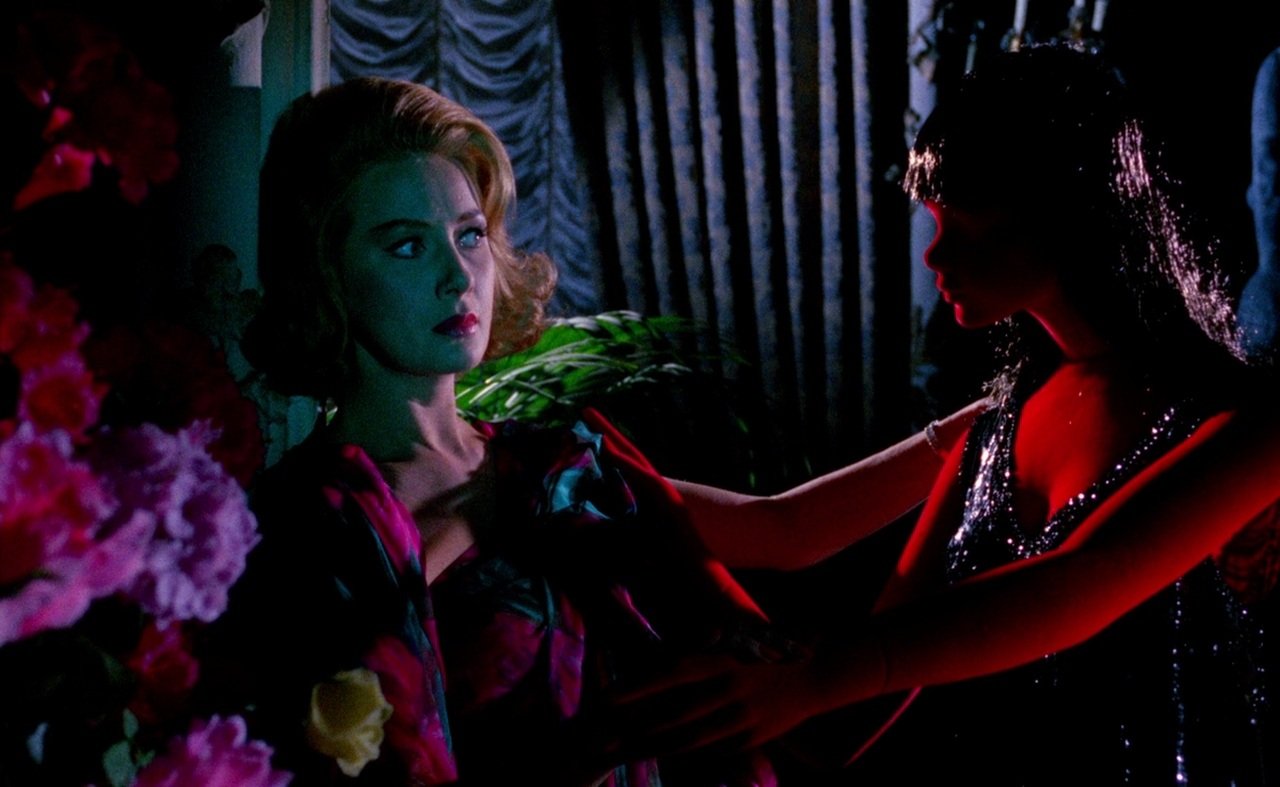 Mario Bava’s Blood and Black Lace (Italy, 1964) is a giallo landmark. Many experts of the genre have cited The Girl Who Knew Too Much (1963) as the birth of the giallo, but I say this elegant slasher picture is where it really began.

If Peckinpah’s The Wild Bunch turns violence into a ballet, then Blood and Black Lace is murder as ballroom dance. Bava was a cinematographer and special effects artist before graduating to director and his films are painstakingly designed and painted on the screen. Blood and Black Lace is one of his most beautiful. You can see it right there in the opening credits, a Gothic fashion shoot bathed in intense, unreal sprays of red and purple and green. Bava sets the atmosphere with thus beautiful yet eerie credits sequence, which gives each star his or her own moving fashion still before jumping into a stormy night. The winds lash and snap the chains of the hanging sign and twist the streams of the elegant fountain until it resembles the spray of a disaster. Order becomes chaos.

Forget the plot, which has something to do with a masked stalker hunting the gorgeous models of a Rome fashion house and a personal diary that becomes the film’s maguffin, and just take in the color and style of this dreamy dance of death. The man, dressed in black with a blank white mask that evokes the fashion mannequins of the film, leads his partners, invariably beautiful women impeccably dressed in bright, bold colors, through an often elaborate, usually sadistic, tightly choreographed murder. Cameron Mitchell plays the head of the fashion house and, thus, is the prime suspect in the eyes of the obsessive Inspector Silvester (Thomas Reiner).

The plot becomes secondary to spectacle, choreographed with sadistic precision, delivered in lurid color, spied upon with a restlessly gliding camera. It’s a mix of poetic, haunting beauty with Grand Guignol gore and a bent of sexual perversity. There’s an undeniable edge of misogyny to the whole thing, but the psycho-thriller aspects seem beside the point as the narrative melts into abstract moments of dreamy, disconnected beauty.

On Blu-ray and DVD. Past DVD releases have all been a little disappointing. Arrow gives the film its American Blu-ray debut and its best DVD edition in a transfer newly mastered from a 2K restoration from the original camera negative, with both the Italian and English language soundtracks (note that American actor Mitchell’s voice in the English version is one of many dubbed by Paul Frees) and newly translated subtitles for the Italian version.

New to this edition and featured on both Blu-ray and DVD editions is commentary by film historian and Mario Bava biographer Tim Lucas and the almost hour-long “Psycho Analysis,” an in-depth documentary on Blood and Black Lace and the origins of the giallo genre featuring interviews with directors Dario Argento and Lamberto Bava and screenwriter Ernesto Gastaldi among others. There is also an appreciation of the film by Hélène Cattet & Bruno Forzani, directors of the giallo tributes Amer and The Strange Color of Your Body’s Tears (10 mins), the visual essay “Gender and Giallo” by Michael Mackenzie (38 mins), a panel discussion on Mario Bava featuring Dario Argento, Lamberto Bava and Steve Della Casa, recorded at the 2014 Courmayeur Film Festival (11 mins), the complete episode of David Del Valle’s television series The Sinister Image featuring his interview Cameron Mitchell (56 mins), and the alternative US opening titles (sourced from Joe Dante’s private print and scanned in 2K especially for this release). Exclusive to the Blu-ray is the neo-giallo short film Yellow by Ryan Haysom and Jon Britt. The accompanying lavishly illustrated booklet features new essays by giallo historian Howard Hughes and David Del Valle and a print interview with Joe Dante.