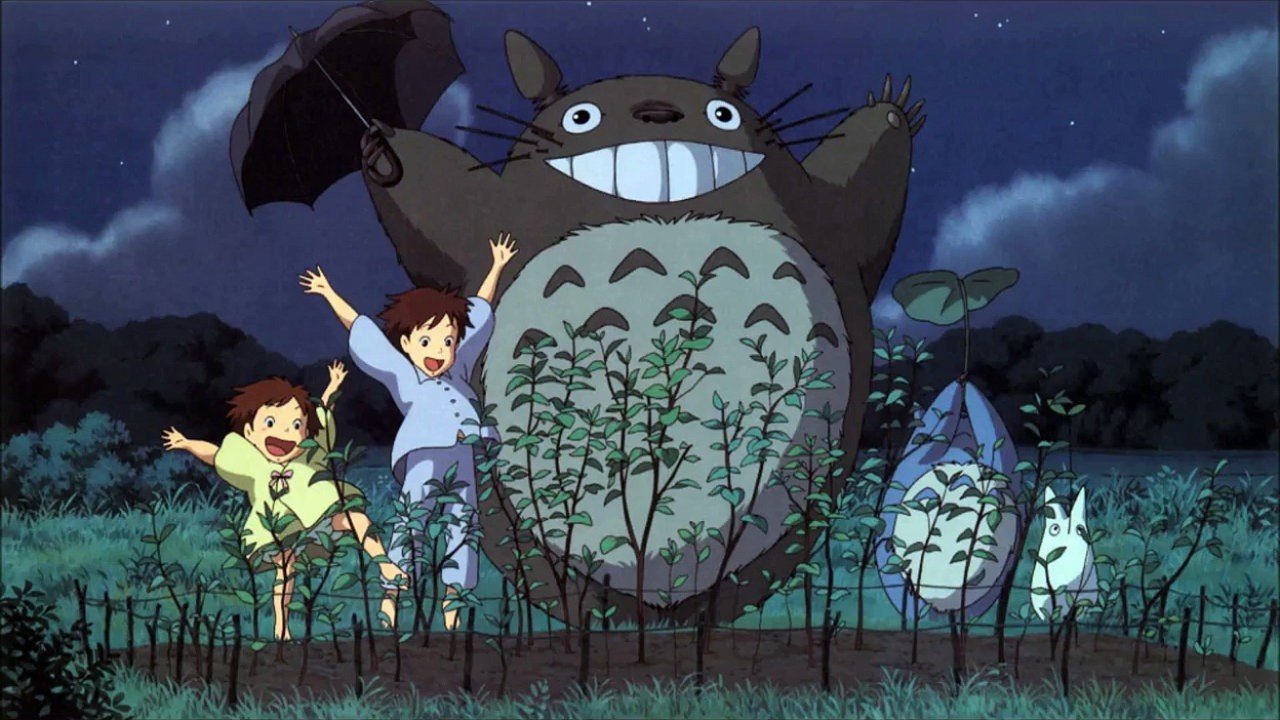 Hayao Miyazaki is one of Japan’s living treasures, a beloved filmmaker whose animated films number among the most beautiful and most enchanting productions ever drawn by hand. In this day of CGI productions, the aging artists still personally draws his key frames and defining characters, with a love and craft that comes through every frame. They may seem old fashioned and perhaps too sweet for American audiences—his films, while loved by many, have never found the huge audiences that flock to the more knowing and culturally savvy Pixar films and Shrek sequels—but the lovely fables, epic adventures, ecologically-minded dramas and modern fairy tales are all treasures.

My Neighbor Totoro (Japan, 1988) was Miyazaki’s first genuine masterpiece and perhaps my favorite of Miyazaki’s films. The magical family film is the darling story of two young sisters befriended by forest spirits (among them a friendly, perhaps imaginary, giant blue hedgehog who introduces them to the wonders of nature) one magical summer. While the fantasy and whimsy captures the playful imagination of children, a powerful undercurrent of emotional crisis grounds their experience: their infirm mother is recuperating from some unexplained illness in a local hospital and the anxiety takes its toll on the youngest. The compassion of Miyazaki’s world is in the way the spirits (including a bus that is part Cheshire Cat) rally to look after the little girl lost. Rarely has there been such a tender and respectful exploration of the emotions and fears of children, and never in such a delightful flight of fantastical adventure and wonder. A masterpiece of modern animated fantasy made for children and adults alike.

GKids and Shout! Factory present My Neighbor Totoro: 30th Anniversary Edition, a limited-edition set Blu-ray in a hard slipcase with new 40-page book with art and essays and a bonus CD soundtrack in the specially-designed hardback disc case with bookleaf trays. It’s a gorgeous set.

The Blu-ray features both the original Japanese soundtrack and a dubbed English language soundtrack featuring the voices of Dakota Fanning and Elle Fanning as the sisters and Lea Salonga and Timothy Daly as the father, originally recorded for the 2005 American release by Disney, and the supplements are all carried over from earlier Blu-ray releases by both Disney and GKids/Shout! Factory. Complete storyboards and production are set to the movie soundtrack in real time and there’s “Behind the Microphone” featurette (6 minutes) with Dakota and Elle Fanning and footage from the dubbing sessions.

Imported from the original Japanese disc release are the brief featurettes “Creating My Neighbor Totoro” (3 mins) with Miyazaki, “Creating the Characters” (4 mins) with Miyazaki and producer Toshio Suzuki, “The Totoro Experience” (2 mins) and “Producer’s Perspective: Creating Ghibli” (2 mins) with Suzuki, “Scoring Miyazaki” (7 mins) with Suzuki and compose Joe Hisashi, and “The Locations of Totoro,” a visual tour through real-life inspirations for the settings of the film. All are presented in Japanese with subtitles.

Tim Burton’s 1989 Batman brought the vigilante hero back into the darkness after TV had made him a campy figure of fun in the 1960s live-action series and a cheery friend to children in every animated incarnation up the 1990s. It was Batman: The Animated Series (1992-1995), Bruce Timm’s sleek, stylized animated incarnation that, for the first time, gave us a small screen Dark Knight, and on a kids show to boot! Drawing inspiration for Burton’s art deco designs and nocturnal imagery, Timm gave us a Batman in a film noir world out of the 1940s brought up to date, and the production painted the animation cels on black boards to emphasize the nocturnal, dark atmosphere. It earned a Primetime Emmy Award in 1993 for Outstanding Animated Program and two Daytime Emmy Awards and changed the face of animated superhero shows on TV.

The pilot episode sets the dark tone with the Jekyll and Hyde story of Man Bat, but Joker (voiced by Mark Hamill) pretty much steals the show in his appearances, especially the twisted “Christmas With the Joke”: the clown prince of crime escapes Arkham Asylum in a rocket powered Christmas Tree and replaces It’s a Wonderful Life on TV with his own homicidal holiday comedy. Batman falls somewhere between urban legend and outlaw vigilante in the initial episode and the style is still in the formative stages, but it also has ambition in such episodes as the Rashomon-inspired “P.O.V.,” where three cops have their own interpretation of the mysterious hero’s actions.

Commissioner Gordon (Bob Hastings), Alfred Pennyworth (initially Clive Revill, taken over by Efrem Zimbalist Jr.), Dick Grayson / Robin (voiced by Loren Lester), and Barbara Gordon / Batgirl (Melissa Gilbert) were all brought into the show and other villains featured in the first season include The Catwoman (notably the two-part “The Cat and the Claw”, voiced by Adrienne Barbeau), the schizophrenic Two-Face (also in a two-part adventure titles, of course, “Two-Face,” voiced by Richard Moll), Mr. Freeze (Michael Ansara, reworked as a tragic, lonely figure), The Penguin (Paul Williams), Poison Ivy (Diane Pershing), and The Riddler (John Glover). The show even gave us the evolution of Grayson from sidekick Robin to solo hero Nightwing.

The series also made an enduring impact upon the Batman universe with the introduction of Harley Quinn, an original character created to play The Joker’s sidekick who was later incorporated into the comic books and even in the big screen DC Comics universe in the film Suicide Squad.

These shows were created from hand-painted cels and, between the deco stylization and the rich colors, it captures the flavor of the old Fleischer Superman cartoons that inspired the show without aping it. Timm and his producing partner Eric Rodomski were still wrestling with the characterizations and balancing the flavor in the first season so the characters may feel a little primal to fans, but only a little: it was a solid start to one of the rare kid shows that drew in a loyal adult audience and the show evolved in style and complexity as it expanded its universe over the seasons. Note that the show was retitled The New Batman Adventures for the third and final season.

Batman: The Complete Animated Series has newly mastered for its Blu-ray debut from 2K scans of the original 35mm interpositive elements for this set, with dirt and scratch clean up and color correction. It’s not just a high definition upgrade, it’s a restoration and it looks superb. Much (though not all) of the dirt and grit from the original cel artwork, present in the original DVD releases, is gone and the picture is sharp with rich, vibrant color and deep blacks that preserve the show’s noir aesthetic.

The 12-disc set features all 109 episodes of the half-hour series plus recently-remastered animated features Batman: Mask of the Phantasm (1993) and Batman & Mr. Freeze: SubZero (1998), produced in the style of the TV series and featuring the voice of Kevin Conroy at Batman. Carried over form previous home video releases are 25 featurettes, introductions to five episodes by producer Bruce Timm, and commentary on 12 episodes by Bruce Timm and members of the production team Eric Radomski, Paul Dini, Kevin Altieri, Michael Reaves, Boyd Kirkland, Shirley Walker, Glen Murakami, Dan Riba, and James Tucker in various combinations.

New to this set is the 98-minute The Heart of Batman, a new, in-depth documentary on the creation, development, and production of the series (broken into multiple chapters) featuring new interviews with the production team.

Also features a digital copy of all 109 episodes plus the two accompanying features.

The limited edition release comes in a number box with a hardbound case featuring bookleaf sleeves for discs (one fold-out per disc with artwork, episode listings, and supplements) and includes three miniature Funko Pop figures of Batman, Harley Quinn, and The Joker and an envelope with seven holographic cards featuring characters and scenes from the show.