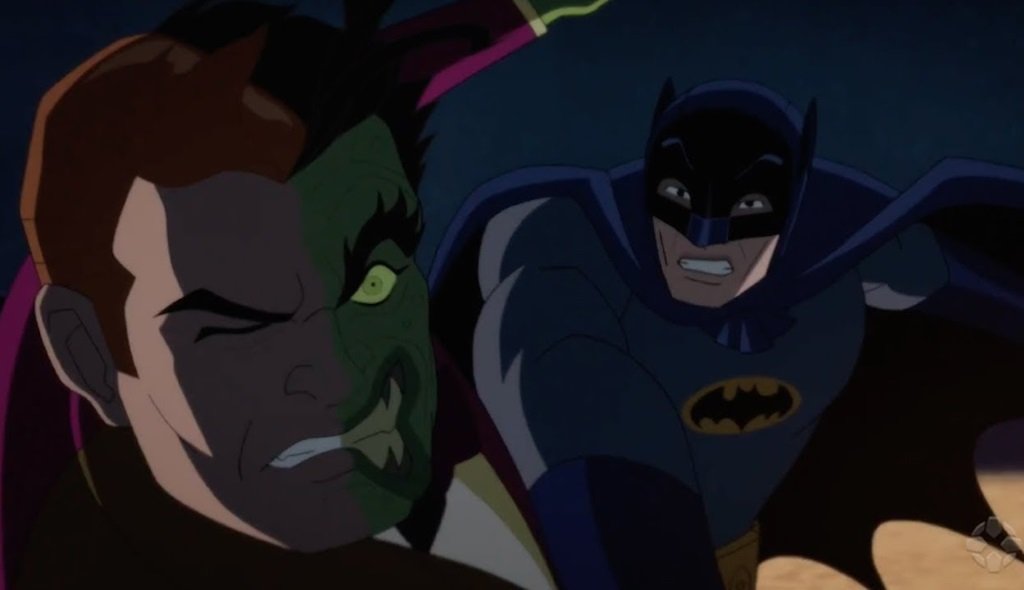 The 2016 DC Animated Movie Batman: Return of the Caped Crusaders, featuring Adam West and Burt Ward, stars of the campy original 1960s TV series Batman, as the voices of Batman and Robin and Julie Newmar reprising her purr as Catwoman, proved popular enough to inspire a sequel. Batman vs. Two-Face (2017) is made with the same mix of tongue-in-cheek humor, tortured puns, and crazy supervillain schemes delivered with straight-faced self-awareness.

William Shatner voices the twin roles of District Attorney Harvey Dent, in this version an egotistical but well-meaning public servant, and the villain Two-Face, created when a scientific experiment gone bad blows in face and leaves half his profile scarred. The character never appeared in the original series so his origin is sketched out in the opening minutes and the colorful credits sequence. There’s not much to the story, a silly little lark that tosses in classic TV villains King Tut and The Bookworm with bit roles for Joker, Riddler, and Penguin, but it’s clear that the filmmakers love the original show. They toss in a Batcaveful of tributes, from voice actors recreating the voices of the gallery of classic villains to the way Robin pounds his fist into his open hand to punctuate his verbal exclamations.

Like the first throwback Batman film, the style evokes the seventies Filmation shows (but with a higher quality). Harvey Dent is designed to look like a young William Shatner and the role of a split personality at war with itself brings out the self-conscious hamminess that Shatner does so well. And it features the final screen performance of Adam West, who passed away in the summer of 2017. It’s not really sure if it’s comedy, parody, or straight-up tribute but Batfans should be in sixties pop culture nirvana nonetheless.

On Blu-ray and DVD in a special edition that include interviews with Burt Ward and Julie Newmar and the Adam West tribute panel from Comic-Con 2017.

Also on VOD through most cable systems, iTunes, Amazon Video

, DirecTV, and other services.
Batman vs. Two-Face [Blu-ray]

Originally published in 2004, Darwyn Cooke’s limited series/graphic novel “DC: The New Frontier” is part comic-book tribute and part revisionist superhero history. The DC Animation Original Justice League: The New Frontier (2008) is a largely faithful adaptation of the story, a rethinking of the transition between the golden age of Superman, Batman, Wonder Woman, Flash, Green Lantern, and other marquee DC heroes, and the silver age incarnations, as seen through the prism of the real world of late-fifties America: the Cold War, Korea and Vietnam, loyalty oaths, McCarthy. The premise isn’t just historical. It fills in the gap in the comic book record.

Carried over from the original releases are two commentary tracks (one by graphic novel writer/artist Darwyn Cooke, who, the other by the feature filmmakers and producers) and the 40-minute “Super Heroes United: The Complete Justice League History,” a solid overview of the superhero team in the comics featuring some of the best writers on the genre. Also includes the featurettes “The Legion of Doom: The Pathology of the Super Villain” (34 mins) and “Comic Book Commentary: Homage to the New Frontier” (10 mins) and three bonus episodes of the animated “Justice League” series.
Justice League: New Frontier Commemorative Edition [Blu-ray+DVD]