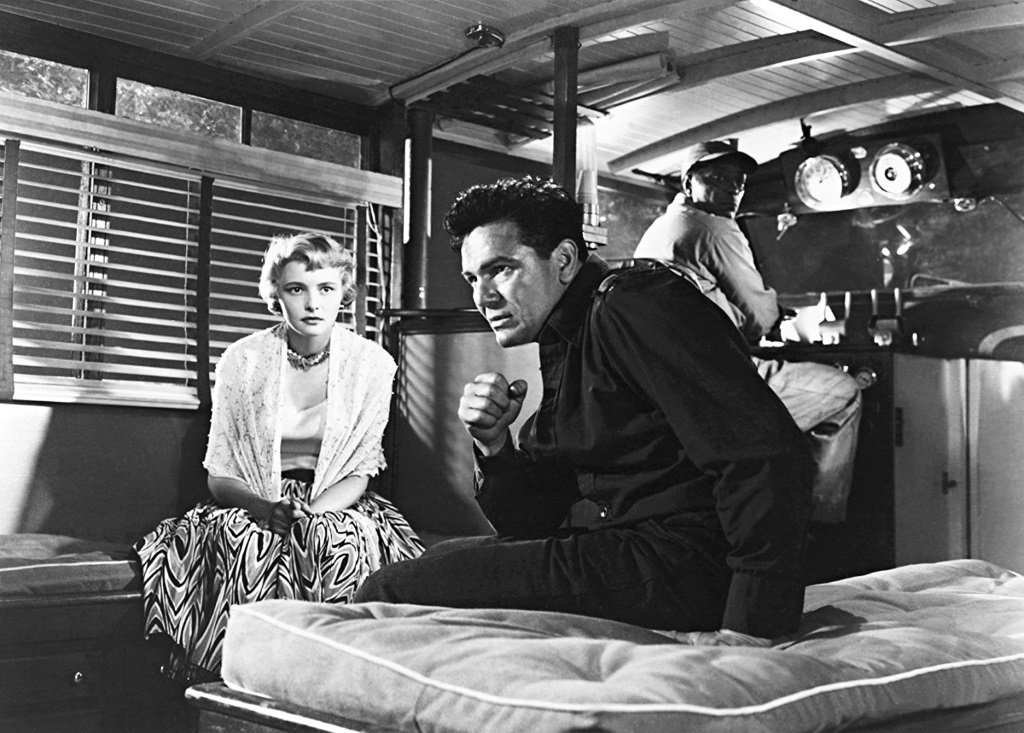 The Breaking Point (1950), the second of three big screen adaptations of Ernest Hemingway’s To Have and Have Not, stars John Garfield as Harry Morgan, the role that Humphrey Bogart played in the original. The Howard Hawks film took great liberties with Hemingway’s story. This version is more faithful but takes its own liberties. Harry is a husband and father of two young girls in a Southern California coastal town, a war veteran struggling to get by as the captain of charter fishing boat, and his problems get worse when his latest client skips without paying his bill and he takes an illegal job to pay his marina fees and get his boat back home from Mexico.

Patricia Neal co-stars as Leona Charles, a flirtatious beauty who clearly relies on the kindness of wealthy stranger. She tags along the fishing trip chartered by the slippery client and, left adrift in Mexico, is reluctantly given a ride back. Leona is not your usual femme fatale. She’s out for a good time, preferably with someone else picking up the tab, and Neal plays the part with gusto: a hearty bad girl with flashing eyes and a hungry grin but not quite an icy killer. It takes a while for her conscience to get fired up (even after meeting Harry’s wife she makes a play for him) but there’s a human being behind the party girl on the make.

Juano Hernandez is his partner on the charter and the moral voice attempting to keep Harry. from getting involved with criminal jobs, Wallace Ford is the sleazy lawyer Duncan who keeps trying to entice Harry into an illegal job, Victor Sen Young (Jimmy Chan in a dozen Charlie Chan movies and Hop Sing on Bonanza) is the human smuggler who tries to cheat Harry on the deal to sneak Chinese immigrants into the U.S. from Mexico.

What sets this film apart from other adaptations is the focus on his domestic life and the stress of economic anxieties that makes Morgan withdraw emotionally and stop communicating with his wife (a superb Phyllis Thaxter), who keeps reminding him they have other options. Garfield makes those issues the core of his character, a man who feels frustrated that his dream is crumbling and guilty that he’s unable to provide for his family like a man is supposed to. Unlike the Bogart incarnation, this Harry is not as tough or as smart as he imagines himself to be. His plan to turn the tables on a group of robbers who hire him for an ocean getaway has fatal consequences.

Director Michael Curtiz draws us into the family life and the stresses on the marriage beautifully and he doesn’t let us forget the human cost of Harry’s actions in the final scene of the film, which reminds us that at least one character never gets his happy ending. The heartbreaking image of the lone figure left alone, hopelessly in search of someone who isn’t coming back, as everyone else drifts away is evoked by Nicholas Ray in the end of Rebel Without a Cause.

Add to My List on Criterion Channel, which also features bonus interviews and documentaries from the special edition disc release.

, iTunes, GooglePlay and/or other services. Availability may vary by service.
The Breaking Point (The Criterion Collection) [Blu-ray]

The Breaking Point was previously released on DVD-R from the Warner Archive. Criterion restores the film in 2K mastered from a 35mm safety fine-grain positive struck from the original camera negative. It is a strong, clean image with good contrasts, both in the sunny daylight scenes and the nourish night scenes, and no visible damage,

Criterion Blu-ray and DVD editions feature new video interviews with Curtiz biographer Alan K. Rode, who discusses Curtiz’s work and working methods as well as his approach to the story (21 minutes), and Garfield’s daughter Julie Garfield, an actress and acting teacher in her own right who discusses her father’s art and career (16 mins). A video essay by Taylor Ramos and Tony Zhou looks at the way Curtiz stages and photographs the scenes in the family home (10 mins). There’s also an archival program on Hemingway’s Florida home from a 1962 episode of Today and the accompanying fold-out insert features an essay by Stephanie Zacharek.