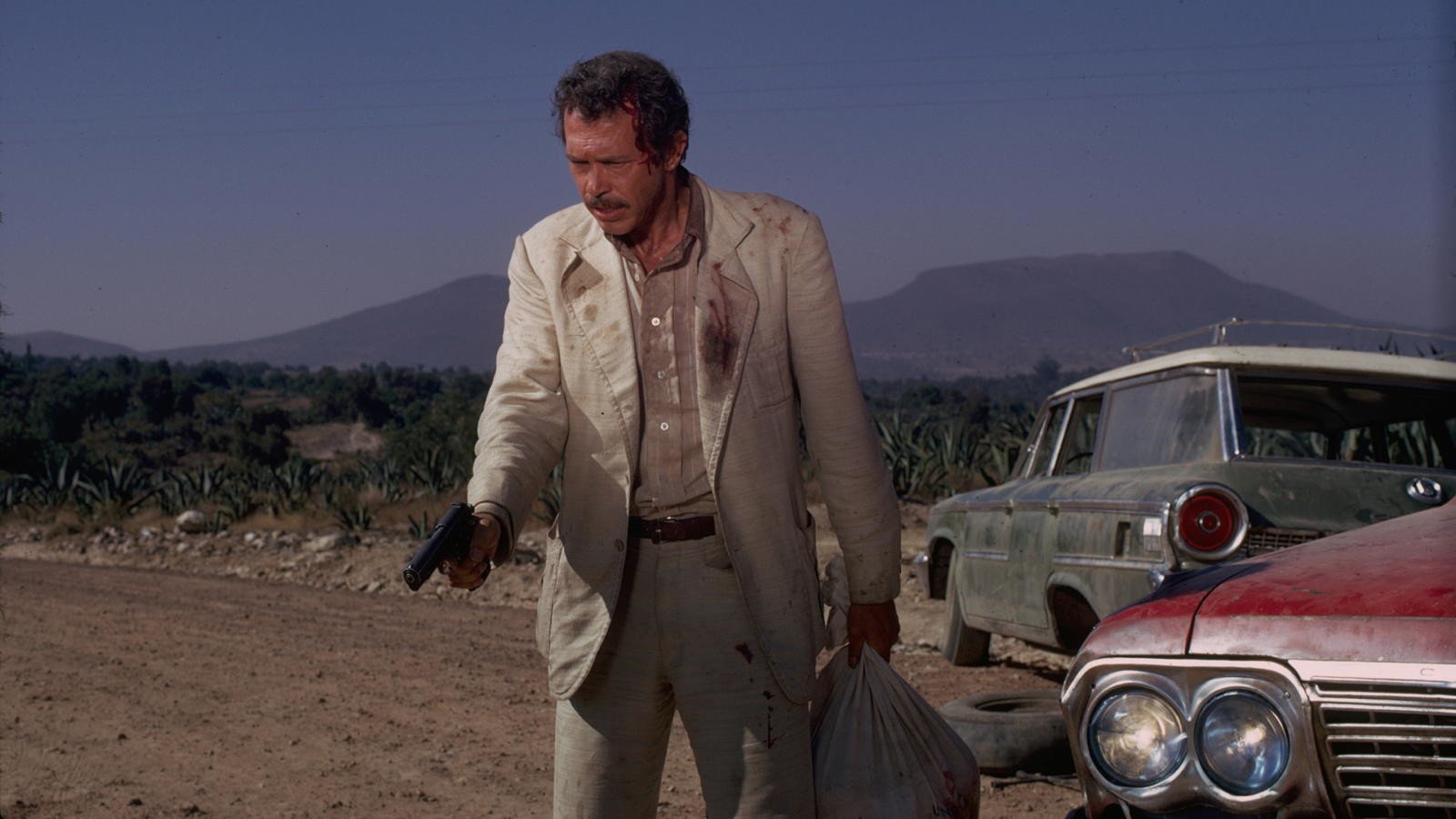 Bring Me the Head of Alfredo Garcia (Twilight Time, Blu-Ray), one of Sam Peckinpah’s personal favorites of his films (and the rare Peckinpah film not to get reworked by the studio), opens on an idyllic river scene with a pregnant girl soaking her feet in the lazy current with a beatific smile on her face. In his great westerns, the river scenes are the brief escapes from violent lives in his character, reprieves in the middle of the drama before they march back out to meet their fates. This comes before the story even begins and once the spell is broken by the violence of a brutal father, a Mexican crime lord played by Peckinpah regular Emilio Fernández, and a $1 million bounty placed on the head of Alfredo Garcia, the father of the unborn child, there is little peace or paradise to be found.

Warren Oates stars as Benny, a grubby lounge pianist playing for tourists in a Mexican dive when a couple of American hitmen (Robert Webber and Gig Young) saunter in looking for information on “an old friend.” Benny thinks he’s hit the jackpot—a whopping $10,00 for giving them proof that Alfredo Garcia is dead (yes, they want his head)—but it costs him everything that matters and the tawdry treasure hunt turns into a revenge drama. It plays like a pulp noir thriller by way of a road movie of the damned, marinated in mescal and left to rot in the desert sun. Benny’s not that smart or savvy but Peckinpah clearly loves this small-timer with his wrinkled white linen suit and clip-on tie and bad cantina sing-along songs. He may be a loser but he truly loves his philandering girl Elita (Isela Vega) and he develops more backbone with every stage of the odyssey. When he’s double crossed, he literally drags himself out of a shallow grave and returns with vengeance on his mind, fueled by rage, tequila, and a perverse loyalty to the rotting head he’s come to talk to like a father confessor.

The film opened to scathing, outraged reviews (one notable exception was Roger Ebert, who called it “some kind of bizarre masterpiece”) but has since been embraced as a perverse masterpiece, the ultimate cult film in the career of a defiantly confrontational director.

On sale from Screen Archives Entertainment through Friday, March 31 (4pm EST) and on Amazon
Bring Me the Head of Alfredo Garcia [Blu-ray]

Twilight Time gives the Blu-ray debut of this film more original supplements than any previous release from the label. The 55-minute documentary Passion & Poetry: Sam’s Favorite Film is a new production from German filmmaker and Peckinpah fan Mike Siegel featuring a wealth of interviews with Peckinpah actors and collaborators. A new commentary track by Peckinpah historian and Twilight Time co-founder Nick Redman with Alfred Garcia co-writer and executive producer Gordon T. Dawson is paired with a track by Peckinpah scholars Paul Seydor, Garner Simmons, David Weddle and Redman previously recorded for the film’s DVD debut. There’s a new 25-minute video interview with Peckinpah biographer Garner Simmons, who was on the set of Alfredo Garcia, and a gallery of stills and promotional art, plus Twilight Time’s trademark isolated musical score and an eight-page booklet with an essay by Julie Kirgo. Limited to 3000 copies, available exclusively from Screen Archives and TCM.