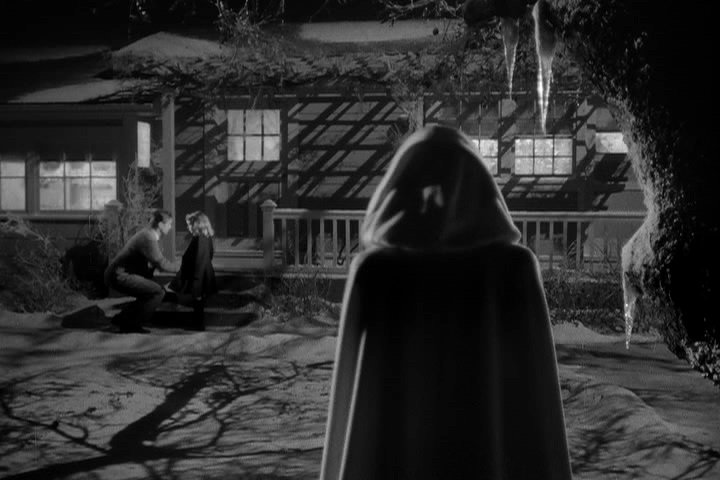 The success of the original 1942 Cat People, a shadowy psychological horror film simmering with sexual repression, prompted RKO to request a sequel from producer Val Lewton. His solution was surprising and inventive: Curse of the Cat People (1944), a psychological drama with a child’s perspective and a twist of ghost story.

This story is centered on Amy (Ann Carter), the dreamy young daughter of hero (Kent Smith) of the original film and a young girl constantly in her own imagination, so distracted by butterflies and woodland creatures and stories of magic that the other children shun her. Left alone, she befriends the aged widow of the “haunted” manor in the neighborhood and conjures up a magical friend: the ghost of Irena (Simone Simon) from the first film.

More fairy tale than horror, this Irena is presented as a mix of imaginary friend (who materializes after Amy sees a photograph of Irena among her father’s things) in a gown fit for a storybook princess and benevolent spirit looking after a dreamy girl. It was a flop upon release, perhaps because audiences expected another horror film rather than a delicate fantasy, but is a tender and lovely tale of childhood innocence and imagination with poetic images created on a B-movie budget.

The film was to be the feature debut of Gunther von Fritsch but he was replaced by Robert Wise, an editor making his directorial debut, after falling behind schedule and going over budget. The filmmakers share directorial credit on the finished film but it was Wise who went on to a successful career behind the camera. He directed two more films for producer Val Lewton and rose through the ranks to become an Oscar-winning filmmaker in his own right.

This is a beautiful master from a nitrate fine grain from the Museum of Modern art, not a restoration but a beautiful work of preservation from a superb source. This is also the first of what I hope will be many collaborations between Shout! Factory and the Warner Bros. catalog. The Warner Archive line was bringing out a nice array of Blu-ray editions from the catalog but Shout! Factory gives it a special edition treatment with some nice supplements.

The Curse Of The Cat People [Blu-ray]