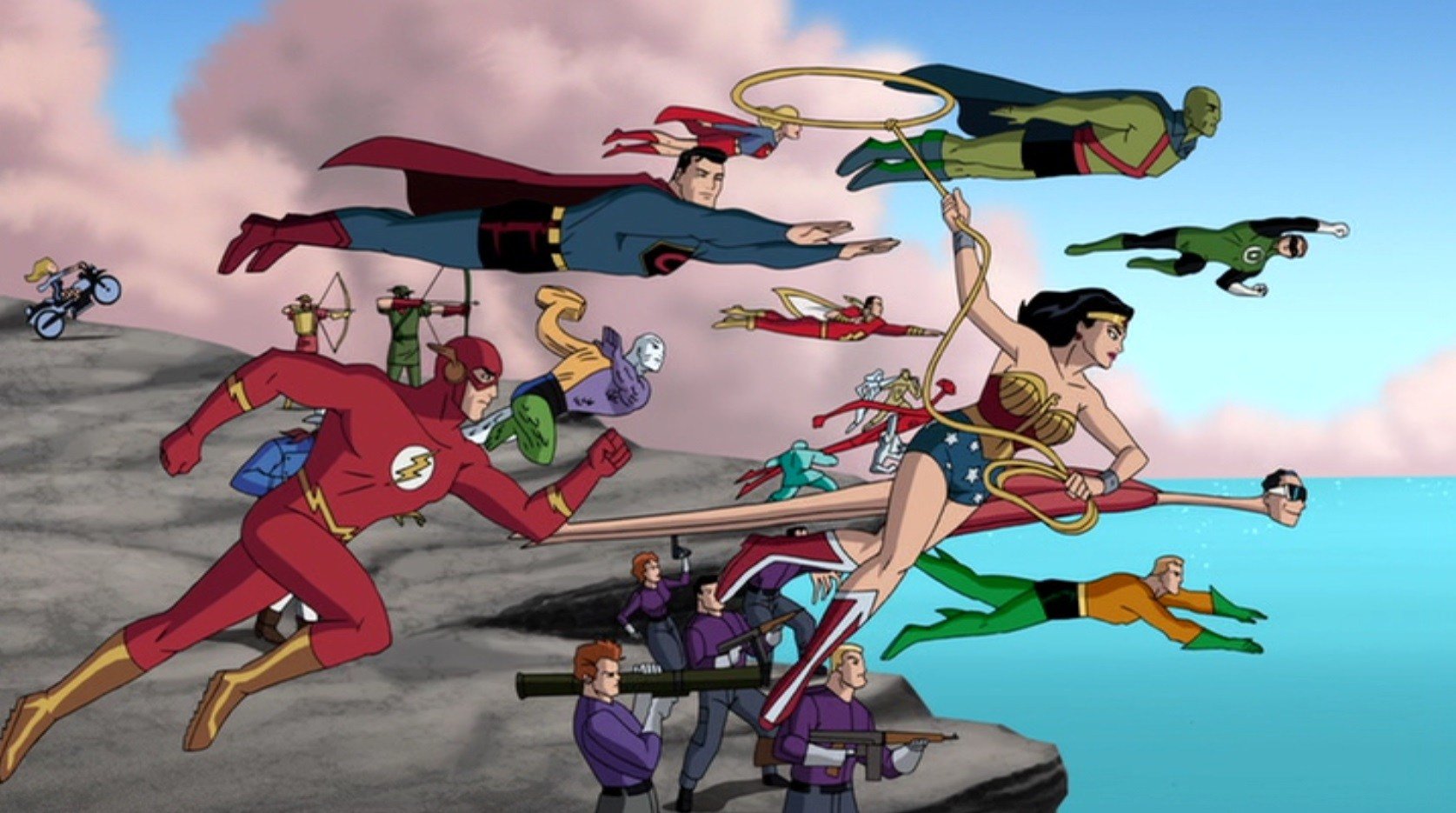 Warner Bros. is struggling to create its own live-action superhero universe on the big screen to compete with the huge, interconnected Marvel Comics Universe, and mostly falling short. But for the past decade, Warner Home Video has been producing a steady series of direct-to-disc animated original features showcasing their marquee heroes in stories taken right out of the pages of comic books and graphic novels, offering alternate takes on the heroes and variations on the universe in dozens of films. As of Christmas 2017 there are 30 DC Universe Animated Original features (Batman: Return of the Caped Crusader and Batman vs. Two-Face, tributes to the 1960s live-action Batman TV series with the voices of Adam West and Burt Ward, are not counted as part of this universe) and DC Universe 10th Anniversary Collection collects all 30 of them, from the 2007 release Superman Doomsday to the 2017 entry Batman and Harley Quinn, in a big box set.

It’s a surprisingly good series of films, given the limited budgets and simplified animation. It draws its style from the Cartoon Network DC shows and plays a few (very few) variations on the formula, with some productions more graphically stylized than others. Almost all of the features are adapted directly from graphic novels and notable storylines from the comic books series and a great cast of voice actors give their own takes on the characters.

Among my favorites is the second animated original, Justice League: The New Frontier (2008), adapted from Darwyn Cooke’s graphic novel. It drops the great heroes of the DC comic book universe (Superman, Batman, Wonder Woman, Flash and others) into the real world of the late 1950s (the cold war, McCarthyism, Korea and Vietnam) to reimagine the years between the end of the “Justice Society” comic books and the first issue of the “Justice League.” Part comic-book tribute and part revisionist superhero history, it doesn’t quite pull together—it’s pretty episodic and not well integrated—but it’s still an interesting take with a PG-13 rating. Another stand-out is All-Star Superman (2011) adapted from a 12-issue mini-series by writer Grant Morrison and artist Frank Quitely that embraces the pulp fun of golden age Superman with a modern grace and a mythic dimension. It’s not a reboot or an alternate universe, just a couple of creative artists offering their version of the ultimate Superman story with the humanity and humility of the Man of Steel coming through between the battles with giant monsters, alien invaders, minor gods and major supervillains.

Two of the great Batman graphic novels written by Frank Miller are turned into animated features. Batman: Year One (2011), Miller’s revision of the early days of Batman and Jim Gordon (before he became police commissioner), features the voices of Ben McKenzie, currently playing young Jim Gordon on TV’s Gotham, oddly enough as the young Bruce Wayne and Batman to Bryan Cranston’s Jim Gordon, who narrates. For a story constructed out of choppy slices, this is probably the most dramatically focused and unified of the DC animated features. Batman: The Dark Knight Returns, Part 1 (2012) and Part 2 (2013), originally released in separate volumes, adapts Miller’s landmark graphic novel with Peter Weller voicing old man Bat with the cold edge of an angry survivor and Michael Emerson taking on The Joker with a perfectly underplayed glee for chaos. Director Jay Oliva takes some shots right out of the graphic novel and, though the clean line-drawing animation is very different from the heavy wood-cut slashes that look carved in to the graphic novel, the big, blocky, heavy character designs of Bats and Supes are preserved, as is the gruesomeness of the smiling dead left behind by the Joker.

And Batman: The Killing Joke (2016), adapted from the award-winning 1988 graphic novel written by comic book legend Alan Moore, expands the story with an extended prologue that gives Batgirl a bigger role but adds a twist that doesn’t belong in the story. The rest is a faithful adaptation that takes on the complicated relationship between Batman and The Joker, adds a human element to the origin story of the iconic supervillain, and pushes the violence to brutally personal extremes in a sadistic plot to break the spirit and the moral character of Commissioner Gordon, which involves the cruel abuse of his daughter Barbara (formerly Batgirl). Kevin Conroy and

Fans of the 1990s Batman and Superman animated shows will appreciate Kevin Conroy and Tim Daly back in their original roles in Superman/Batman: Public Enemies (2009) and Superman/Batman: Apocalypse (2010), and Justice League: The Flashpoint Paradox (2013) is the first screen adaptation of the concept before it became part of the storyline of the CW’s live action The Flash.

All feature the supplements included on the respective original Blu-ray releases. That includes commentary tracks, scores of episodes from the Cartoon Network animated shows, dozens of featurettes, and the live-action pilot episodes to the seventies Wonder Woman series (previously released on the DVD series set) and an Aquaman series, starring Justin Hartley as the orphan son of Atlantis, from Smallville creators Alfred Gough and Miles Millar that was never picked up.

Exclusive to this set is a bonus disc with new supplements: the featurettes “The Super Human in Us All,” “A Comic Book History of Justice League Dark,” and “Mark Hamill: Finding the Laugh, the 2017 Comic-Con panels “DC Universe Original Movies 10th Anniversary” and “A Tribute to Darwyn Cooke,” the 2008 Comic-Con panel on the animated “Wonder Woman” feature, and Lookbooks for “Batman: The Dark Knight Returns,” “Justice League: The Flashpoint Paradox,” “Batman: The Killing Joke,” “Justice League: Throne of Atlantis,” and “Superman/Batman: Apocalypse.”