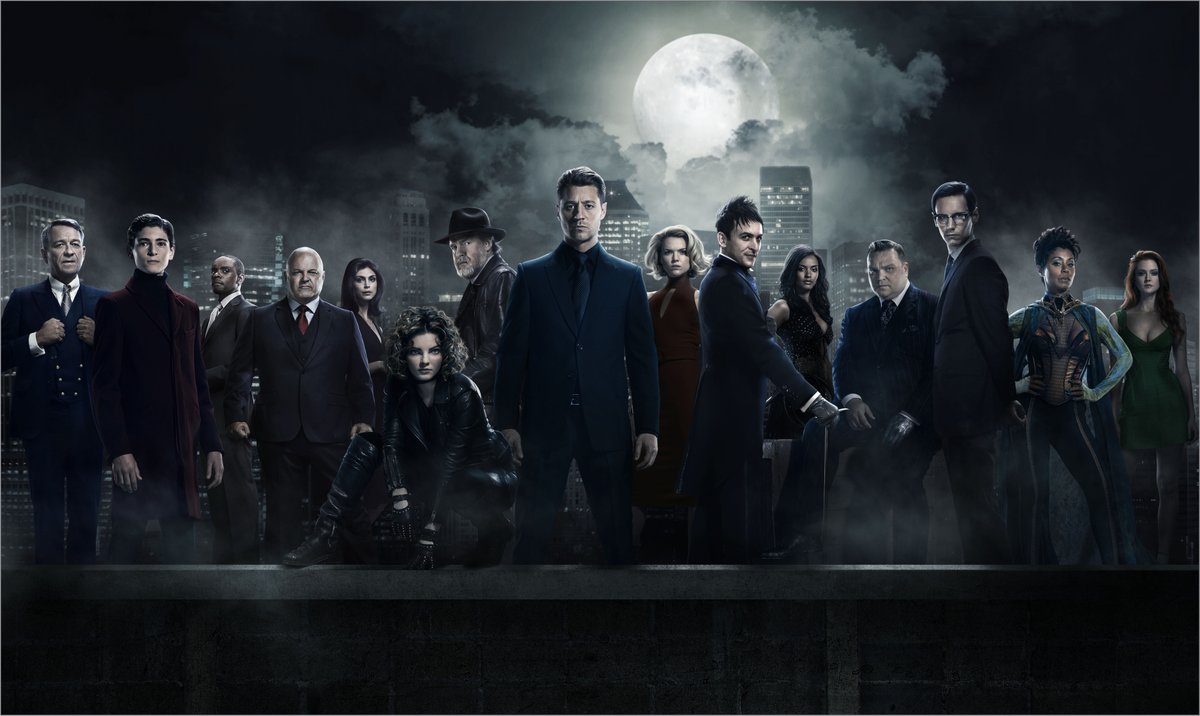 Superheroes dominate TV almost as much as they do the movies. They’re not quite the ratings blockbuster compared to the big screen spectacles but they are all over the TV schedule and streaming menus.

So it’s no surprise that anti-heroes and villains are taking center stage in more productions. Especially in Gotham, the story of life in Gotham City before James Gordon became commissioner and Bruce Wayne became Batman. It’s not just about the birth of a hero, it’s about the origins of the great Batman villains, with The Penguin and The Riddler taking central roles in the long-running saga. Here are three small screen releases featuring the villains and anti-heroes of the DCU in the spotlight.

Gotham: The Complete Third Season (Warner) opens with Gordon (Ben McKenzie) out of the police department and working as a lone wolf bounty hunter and PI and Oswald Cobblepot (Robin Lord Taylor), aka The Penguin, running for Mayor of Gotham City with the help of Edward Nygma (Cory Michael Smith), the man who will become The Riddler. It also continues the education and training of young Bruce Wayne (David Mazouz) under the guidance of Alfred (Sean Pertwee) and influence of street-smart teenage thief Selina Kyle (Camren Bicondova).

This season features the Court of Owls, an old order of ruling families that runs the city behind the scenes and recruits both Bruce and James Gordon into their ranks, and reintroduces Ivy Pepper (Maggie Geha), who grew up since her previous appearances, as well as Mr. Freeze (Nathan Darrow) and Firefly (Camila Perez) as Arkham “freaks” recruited by Penguin, and it features psychopathic stage hypnotist Jervis Tetch (Benedict Samuel), aka The Mad Hatter, as the driving force behind the season’s defining story arc. The first 2/3s of the season is subtitled “Mad City,” after Tetch’s plot to use the transformative blood of his sister Alice to transform Gotham citizens into monsters (or unleashing their potential, as he puts it). There are plenty of stories running through the season—Captain Barnes (Michael Chiklis) and Lee Thompkins (Morena Babbarin) both take a ride to the dark side, Harvey Bullock (Donal Logue) reluctantly takes charge of the Gotham PD and turns out to be pretty good at it, Barbara Kean (Erin Richards) makes a bid as underworld queen—but it’s the love/hate relationship between Cobblepot and Nygma, best friends turned vengeful enemies, who provide the personality burning at the core of the season. Their war isn’t about power, it’s strictly personal, and if you thought these guys were crazy before, this is the launching point for a truly super villain. So it’s only fitting that the very last scenes of the season show Bruce taking his first steps toward his future vigilante identity and Selina discovering her inner soon Catwoman. It’s not so much an evolution as a promise that the show will follow through on its promise to deliver the birth of Batman. It just may take a season or two.

Gotham is the most visually impressive of the superhero shows, creating a world that straddles 1940s film noir, 1970s crime films, and modern comic book movies, and it draws its dense portrait of organized crime figures, budding supervillains, and shadowy conspiracies from the long history of “Batman” comics. It’s also the darkest superhero show on TV, with brutal deaths shown on the screen (including the murders of innocent victims), and it features more adult themes and sexual innuendo than any of the other DCU shows. This TV Batman is not really suitable for younger fans.

22 episodes on Blu-ray and DVD with the featurettes “The Dark Within the Dark: The Court of Owls,” “Madness Rising: The New Villains of Gotham,” the brief “Ben McKenzie Directorial Debut,” and the 2016 Comic-Con Panel, plus deleted scenes. The Blu-ray edition also includes an UltraViolet digital HD copy of the series.
Gotham: The Complete Third Season [Blu-ray]

As in the comics, Lucifer has abandoned Hell to enjoy the pleasures of human life as a nightclub owner in Los Angeles (the City of Angels, of course) with his loyal assistant Mazikeen, aka Maiz (Lesley-Ann Brandt), who accompanied him from Hell. The TV series, however, focuses on his complicated relationship with police detective Chloe Decker (Lauren German), the only human immune to his powers, and his continuing sessions with psychiatrist Linda (Rachael Harris), characters created for the TV show.

There’s no logical explanation for why Chloe or her ex-husband and fellow cop Dan (Kevin Alejandro) put up with the arrogant and exasperating Lucifer but the character dynamics are entertaining as is Lucifer’s struggle with his feelings for Chloe. This season Linda becomes the only human invited into the whole story behind Lucifer and his brother Amenadiel (D.B. Woodside), a fallen angel, and his complicated issues with his mother Charlotte (Tricia Helfer), who escapes Hell and arrives on Earth in the first episode of the season. Lucy (as Amenadial so affectionately calls him) was supposed to keep Mom prisoner when he reigned in Hades and he decides to keep her grounded on Earth to protect her from his father’s punishment. The problem is that she wants her boys to help her invade Heaven and declare war on God for… well, that’s a long story. Suffice it to say that Lucifer wants nothing to do with Heaven or Hell. He’s found his home on Earth. So Charlotte decides the best way to sour his taste for Earth to break up his partnership with Chloe.

Part of the fun of the show is its take on Lucifer, which remains largely faithful to the character created in Gaiman’s brilliant “Sandman” and continued in Carey’s 80-episode series “Lucifer.” He never lies (though most people never believe him when he admits to being the Devil) and he is devoted to justice: punishing the guilty and making sure the innocent are avenged. As in shows as diverse as Buffy the Vampire Slayer and Supernatural, it reinterprets the Christian mythology of Heaven and Hell and angels and demons in terms of family conflicts and literary metaphors. The major difference here is that it drops them into the conventions of a TV crime drama, and not always to the benefit of the procedural side of the equation. Your mileage may vary, but you have to let a lot of human-level logic slide to get to the fun of the supernatural drama.

Batman and Harley Quinn (Warner), the 29th DCU Animated Original Movie, gives Harley Quinn center stage. Created for the 1990s Batman: The Animated Series as devoted henchwoman to The Joker and supporting comic relief, Harley became a fan favorite and was eventually adopted into the comic book universe, where she was given a tragic backstory.

The 74-minute direct-to-disc feature offers more sides to the character, who has finally broken free of the Joker’s sway and wants to steer clear of the costumed culture now that she’s served her time (what is it with supervillains constantly getting released after nominal sentences in the comic book universe?). Then she’s recruited by Batman and Nightwing (Dick Grayson’s superhero identity after retiring as Robin) to stop her old friend and sometime partner in crime Poison Ivy from unleashing a plot that threatens all life on Earth. She agrees to help in part out of affection for Poison Ivy and in part to let her wild side free again. And she is something of a wild child, following up an alley fight with Nightwing with a little PG-13-rated hanky panky.

Melissa Rauch (of The Big Bang Theory) voices Harley and iconic voice actors Kevin Conroy and Loren Lester (of the original Batman: The Animated Series) are reunited as Batman and Nightwing, while Paget Brewster voices Poison Ivy. Unlike most of the animated DCU features, this is an original story by Bruce Timm, who launched the animated incarnation of the DCU in the 1990s and continues to oversee the animated TV shows and direct-to-video features. It takes a lighter, more whimsical approach to the material (there are fart jokes) along with a rather saucy sense of humor and cheeky sexual innuendo. The Floronic Man and Sarge Steel also appear in the story, along with a brief appearance by Swamp Thing.

DVD and Blu-ray with the featurettes “The Harley Effect” (on the history and evolution of the character) and “Loren Lester: In His Own Voice,” two bonus cartoons featuring Harley Quinn, and a sneak preview of the next DCU Animated Movie, Batman: Gotham by Gaslight, based on the graphic novel. The Blu-ray edition also includes bonus DVD and UltraViolet digital HD copy of the series.
Batman & Harley Quinn [Blu-ray + DVD + UltraViolet Combo]