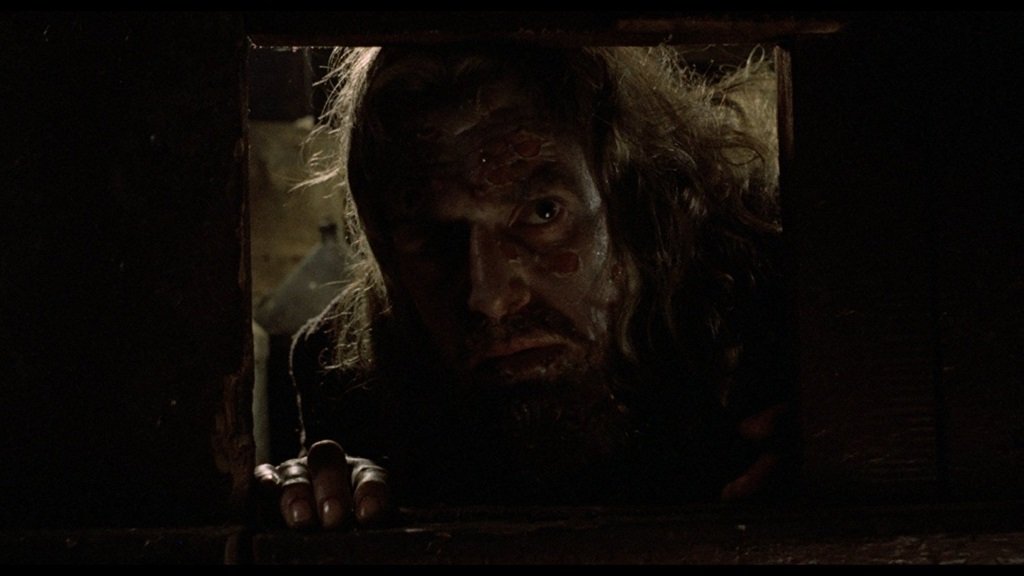 Death Line (aka Raw Meat) (1972) – Gary Sherman directs this underrated (and for years largely unseen) British horror film about the last survivor of a literal underground clan (trapped in a subway construction cave in a century before) who emerges from his cave to hunt for food on the London Underground. Yes, it’s a cannibal film, but it’s also a startlingly tender film about a literal underclass abandoned by the world above, a story that roils in class division. It takes the death of an OBE to get the police looking into the spate of disappearances on the London Underground.

The killer, an unspeaking, primitive figure called the “Man” in the credits (Hugh Armstrong), is also in some ways the protagonist. Drooling and diseased, suffering from plague and malnutrition, he hunts the tunnels of the Underground for food for his dying mate (June Turner). Donald Pleasance steals the film as the unconventional, sarcastic Inspector assigned to the case and then meets his match in a single scene with Christopher Lee as an arrogant high class MI-5 agent. Not so David Ladd (son of Alan Ladd and brother of co-producer Alan Ladd Jr.) as an American in London and Sharon Gurney as his girlfriend and soon-to-be captive of the Man. Their self-involved manner and disdain for the lower classes stands in contrast to the purity of the underground couple but the film stumbles over their scenes together.

Apart from that, however, Death Line is a remarkable horror film. Sherman mixes gore and grace with a powerful introduction to the cannibal couple, surveying the meat and human remains of corpses in various stages of decomposition strewn through the room before gliding over the rubble into an intimate scene where the man slices the throat of his latest victim and feeds the woman by guiding the blood down his fingers to drip into her mouth. We get a little general backstory from the speaking characters but the rest a matter of observation and deduction from the behavioral details. He groans out words as if he’s more used to grunting and howling than talking and uses tools as if they are elements in a ritual that extends to their kills: the dead are stacked in their makeshift mausoleum with an offering to whatever god they recognize. The elements of ritual and instinct and the collision of the visceral and the tender sets the complicated tone of the film. These hunters are third or fourth generation cave-dwellers reverted to a primitive state, almost animal, and so disconnected from the “civilized” world above that they don’t see their prey as fellow humans, merely meat. Which is not all that different from the way the surface dwellers treat the underclass.

Blue Underground presents the film on a dual format Blu-ray+DVD Combo Pack newly transferred from a 2K restoration from the original camera negative of the original, uncensored cut of the film (it was recut for the U.S. release, which carried the title Raw Meat).

Both editions feature commentary by director Gary Sherman, producer Paul Maslansky, and assistant director Lewis More O’Ferrall, the interview featurettes “Tales from the Tube” (with Sherman and executive producers Jay Kanter and Alan Ladd Jr.), “From the Depths” (with actor David Ladd and producer Paul Maslansky), and “Mind the Doors” (with actor Hugh Armstrong), plus trailers, TV spots, radio spots, and a gallery of posters and stills. Accompanying the discs is a 20-page booklet with an essay by Michael Gingold on the creation and production of the film and a Donald Pleasance bio written by Christopher Gullo.