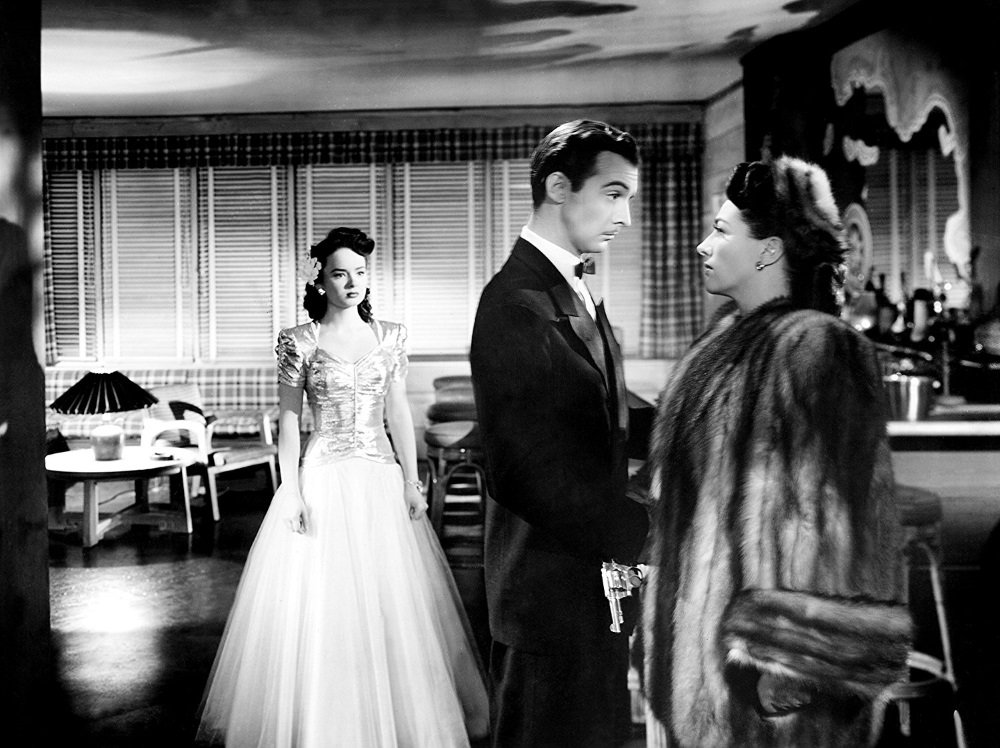 Is Mildred Pierce (1945) film noir or melodrama? I say why choose? Film noir is almost entirely associated with crime stories and life in the shadows and at night in the city and sure enough Mildred Pierce, based on the novel by James M. Cain, opens with death and darkness and the twilight of the soul. But there’s a subset of noir rooted in melodrama or “women’s pictures,” as they were called in the 1940s and 1950s, films about the lives of women as they reach for their American dream, or at least the one promised them in love, marriage, and family. Mildred Pierce offers both, almost as two separate films that converge in the final act

It opens squarely in film noir territory (not that there is anything square and simple in noir), with a point blank murder and grotesque dying convulsions of a man who, even at first glance, convinces us he’s an oily, unclean manipulator who surely earned his terrible death. It’s Zachary Scott in a lounge lizard mustache playing his trademark gigolo with weasely insincerity—almost too perfect for our opening victim. We’ll get back to the corpse but first we leave the beach house scene of the crime for a seedy part of the boardwalk and a woman in fur (Joan Crawford) gripping the rail with every indication of a suicidal plunge into the surf. There’s a gaudily colorful bar with a Polynesian theme owned by Jack Carson, appropriately attired in a white tux that screams new money and no taste especially next to the elegance of Crawford, a nightcap, and what appears to be a neat little frame for murder that sweeps all of our characters into the police station for questioning.

You don’t think of Michael Curtiz, the great house director of Warner Bros. spectacles and prestige pictures, as one of the great noir directors but the opening twenty minutes or so is a master class in film noir directing, in part thanks to stunning nocturnal images by cinematography Ernest Haller (his work earned an Oscar nomination, one of six that the film racked up). The characters are carved by shadows and architectural flourishes and constantly slip into the darkness as they navigate the high and low of the night world, from the modern elegance of Mildred’s beach house to the bar crowded with tacky exotica to the shadowy, almost deserted police station and its enormous bullpen overwhelming the suspects and witnesses. And then as Mildred (once Pierce, now Pierce-Beragon, seemingly doomed to have her name defined by men) tells her story, the shadows of noir give way to the clean, well-lit world of suburban family life and the tragic story of Mildred’s anything-for-my-daughters sacrifice.

The murder, the interrogations, the whole framing sequence is all Hollywood invention and it’s superb, filled with witty lines drenched in cynicism and delicious character moments while also establishing an atmosphere of betrayal and disappointment and resignation and setting up the crimes that will allow the film to meet the Production Code-enforced standard of crime and punishment. The story of how Mildred got there is more faithful to Cain’s story—her obsession to give her children “class,” becoming a self-made business success, and falling for the charms of a shallow ne’er do well playboy (Zachary Scott)—but with the snap of studio dialogue at its finest and a cast of superb characters actors filling everything in between the lines.

Crawford lobbied hard for the role and gave it everything on screen, receiving an Academy Award for her efforts, her first and only Oscar. She earned it: her Mildred is full-blooded and conflicted, a woman so devoted to giving her daughter Veda (an icily arrogant Ann Blyth) everything that she’s blind to the nastiness behind the social snobbishness and avarice of the classist monster she’s created. Poised and elegant in the opening scenes, she’s equally convincing as the hard-working middle class mother always aspiring to her idea of class (her bric-a-brac-filled suburban home shows a limited understanding of what passes for taste), as the working class single mother waitressing like a pro, and as the savvy businesswoman who builds a successful chain of restaurants out of nothing. Blyth is icy mercenary scheming behind the face of an angel and Jack Carson brings a wonderfully brazen edge to the comic qualities that defined his screen persona as Mildred’s business partner, a smiling snake of a hustler always playing the angles, both in business and in love.

Mildred Pierce and, for that matter, Mildred Pierce, revived Crawford’s flagging career; she had just been cut loose from her home studio MGM and was considered washed up, a glamour girl too old to play the clothes-horse. Crawford is as poised as ever as the successful Mildred in the opening scenes but more importantly she gives a vulnerability to Mildred even as she creates a powerful figure as a business success built out of drive and hard work. Ultimately she carves a tragic figure from the material: a blindly devoted mother who sacrifices everything for an ungrateful, self-centered child and creates a monster. Even when she finally sees past her emotional blind spot, looking the poisoned child directly in the cold, soulless eye, she’s still ready for one last sacrifice. And in collaboration with Curtiz she never lets us forget that she’s a woman fighting her way through a world where men want to define her, control her, or simply take her money while sneering at the effort it took her to get it. Argue among yourselves whether or not Mildred Pierce is a feminist statement, but there’s no question that it understands just what she’s up against as a woman in a world where the men don’t just make the rules, they set the standards of judgment.

In addition to Crawford’s Academy Awards for Best Actress and the nomination for cinematographer Ernest Haller, it earned nominations for Best Picture, Screenplay (Ranald MacDougall), and Supporting Actresses Eve Arden and Ann Blyth.

Also on Blu-ray and DVD and on SVOD through Amazon Video, iTunes, GooglePlay, Vudu and/or other services. Availability may vary by service.
Mildred Pierce (The Criterion Collection) [Blu-ray]

Criterion gives the film its Blu-ray debut and offers a DVD version mastered from a new 4k restoration. It is a stunning image, rich and deep and flawless.

Carried over from the Warner Bros. DVD release is the feature length made-for-TNT documentary Joan Crawford: The Ultimate Movie Star (2002). Written and directed by Peter Fitzgerald (a veteran of some of the finest DVD documentaries), narrated by Anjelica Huston, and made with the participation of Crawford’s daughter Christina Crawford (author of Mommy Dearest), it paints a portrait of a singularly driven woman who loved her fans more than her own children and treasured her career above everything else in her life.

New to this edition is a conversation between critics Molly Haskell and Robert Polito (23 minutes), an onstage Q&A with Ann Blyth conducted by Eddie Muller at the 2006 Noir City Film Festival (24 mins), and excerpts from a 1970 episode of The David Frost Show featuring Joan Crawford (15 mins) and a 1969 episode of Today featuring novelist James M. Cain (10 mins), plus a foldout insert featuring an essay by Imogen Sara Smith